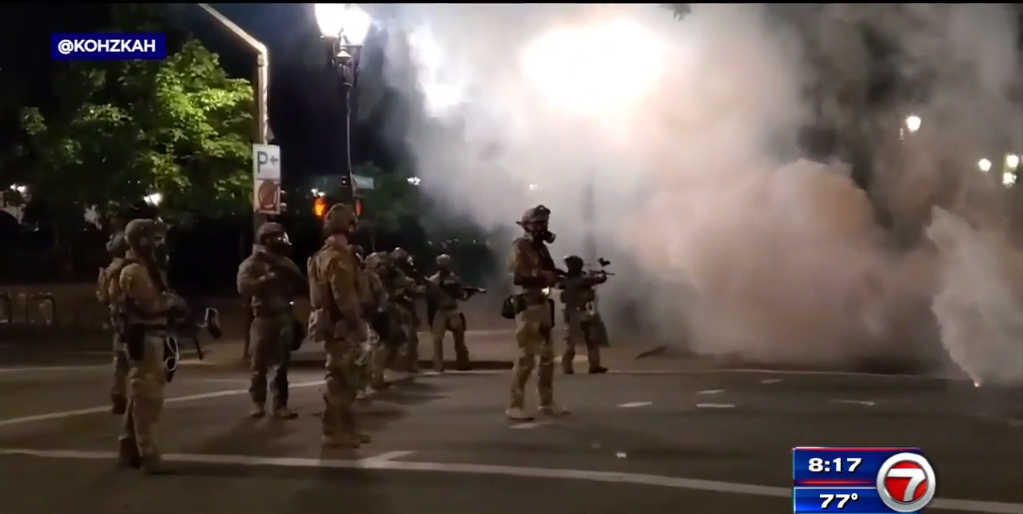 WASHINGTON (AP) — They are the most highly trained members of the Border Patrol, agents who confront drug traffickers along the U.S.-Mexico border and track down dangerous fugitives in rugged terrain.

One day this past week, they were in a far different setting — a city park in Portland, Oregon, looking for two people suspected of throwing rocks and bottles at officers guarding the downtown federal courthouse.

Beyond the debate over whether the federal response to the Portland protests encroaches on local authority, another question arises: whether the Department of Homeland Security, with its specialized national security focus, is the right agency for the job.

It’s not just the Border Patrol Tactical Unit that has been called to duty in Portland. DHS has dispatched Air Marshals as well as the Customs and Border Protection Special Response Team and even members of the Coast Guard.

“The Department of Homeland Security was never intended as a national police force let alone a presidential militia,” said Peter Vincent, a former general counsel for U.S. Immigration and Customs Enforcement, which is also an agency within DHS.

The deployment of DHS agents and officers is legal, both under existing law and an executive order President Donald Trump signed June 26 to protect federal property and monuments. But it has made the agency, created to improve the nation’s response to terrorism, a target of widespread criticism.

Congress plans to delve into the issue Friday, when the House Homeland Security Committee holds a hearing on the federal response to the protests in Portland and Trump’s announcement that he plans to send federal agents to Chicago and Albuquerque, New Mexico, to help combat rising crime while making “law and order” a central theme of his reelection campaign.

“Americans across the country are watching what the administration is doing in Portland with horror and revulsion and are wondering if their cities could be President Trump’s next targets,” said Rep. Bennie Thompson, a Mississippi Democrat who is chairman of the committee.

As of Monday, there were 114 federal agents and officers deployed to downtown Portland, according to an affidavit from Gabriel Russell, the regional director of the Federal Protective Service, the DHS component that provides security for federal buildings.

Protests have been taking place in Portland since May 26 but the federal agents kept a “defensive posture” by staying inside federal buildings until July 3, Russell said in the affidavit, filed in response to a lawsuit by the American Civil Liberties Union seeking protections for journalists and other legal observers covering the demonstrations.

That night, according to Russell, protesters attempted to set fire to the federal courthouse and DHS deployed a Rapid Deployment Force as part of “Operation Diligent Valor.”

That same night, Trump stood before Mount Rushmore and accused protesters around the country who have pushed for racial justice of engaging in a “merciless campaign to wipe out our history.” He later criticized officials in Portland for allowing demonstration to get “totally out of control.”

The officers deploying to Portland are “highly trained,” and many wear camouflage because that’s their duty uniform on the southwest border, according to acting DHS Secretary Chad Wolf, responding to charges of a militarized response to the protests.

In addition to their previous training, they took a 90-minute online course on the mission and jurisdiction of the Federal Protective Service, police powers and criminal regulations, according to a course description provided to The Associated Press.

Richard Cline, principal deputy director of the protective services, told reporters that DHS officers are given additional training to ensure they act within guidelines established by the Justice Department as they assist an organization that was “quickly overwhelmed” by violent demonstrators.

Wolf also defended tactics such as tear gas, rubber bullets and having officers sweep people off the street into unmarked vehicles, evoking images of a secret police force.

“We are only targeting and arresting those who have been identified as committing criminal acts, like any other law enforcement agency does across the country every single day of the week,” he said.

On Wednesday, agents from the Border Patrol Tactical Unit, known as BORTAC, set out from the federal courthouse just after midnight in pursuit of two people in dark clothing and carrying makeshift shields suspected of throwing rocks and bottles at officers, according to court records.

The agents struggled with the two, eventually restraining them and turning them over to the Federal Protective Service. One, a 19-year-old man, was charged with felony assault of an officer.

In addition to rocks and bottles, agents and officers at the courthouse have been struck with ball bearings, improvised explosives, fireworks, and balloons filled with paint and feces, Russell said. Some have also had lasers shined at their eyes.

While the use of BORTAC officers in this environment is unusual, it’s not unprecedented, said Michael Fisher, a former senior official with the agency and member of the unit.

BORTAC officers have been used to serve warrants on suspects considered dangerous, protected emergency personnel during natural disasters and were sent to Los Angeles during the 1992 riots, Fisher said.

“What was happening in Portland is the police were not enforcing a lot the laws and it just escalated and that’s the reason it’s gone on well over 50 days now,” said Fisher, who now runs a security company.

Local officials have in turn accused DHS of inflaming the situation, an argument bolstered by the fact that protests grew larger as controversy intensified over the tactics of the federal agents.

Former DHS officials concede the agency has worked with state and local law enforcement before, with the consent and cooperation of local authorities. But in Oregon, officials have accused the federal government of inflaming the situation and asked it to withdraw.

Vincent, who left ICE in 2014 and now works as a consultant, said some current officials are “extraordinarily uncomfortable” with what they have been asked to do in Portland.

“I am deeply concerned as someone who believes in the mission of the agency and knows and respects its officers and agents that these activities will irreparably damage the agency’s reputation,” he said.