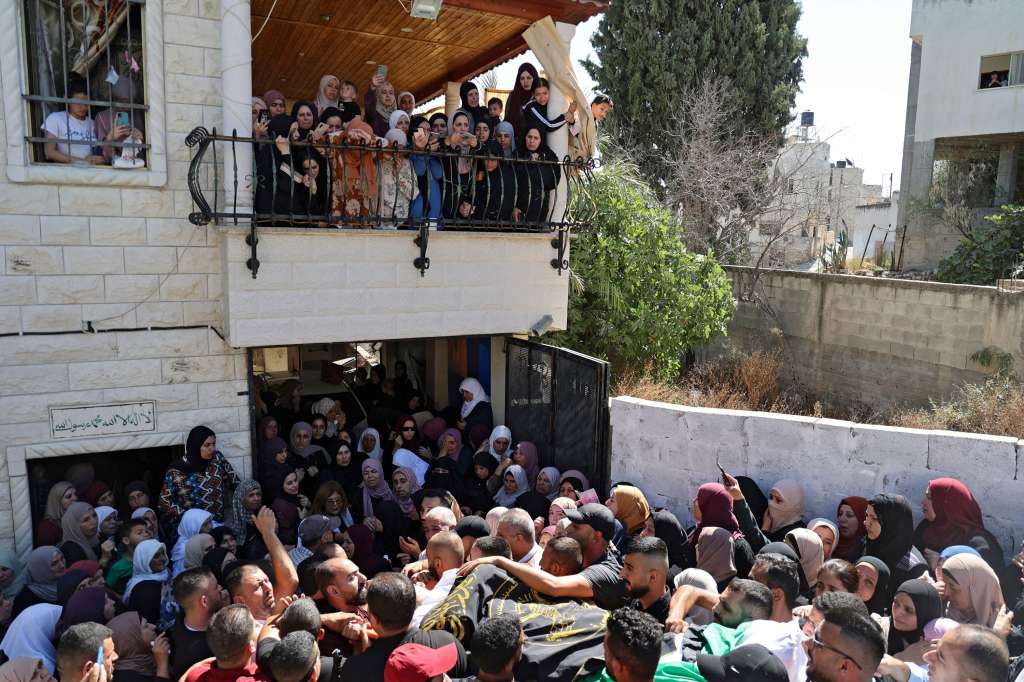 Mourners carry the body of Osama Sobh, a Palestinian killed by Israeli soldiers during clashes near Jenin, during his funeral in the village of Burqin in the Israeli occupied West Bank on September 26, 2021. (Photo by Jaafar Ashtiyeh/AFP/Getty Images)

(CNN) — Five Palestinians have been killed and two arrested Saturday night as part of a days-long operation targeting Hamas in the West Bank, the Israel Defense Forces said.

Overnight Saturday, security forces including members of the IDF, Shin Bet, the Israel Security Agency and the Yamam counterterrorism unit, attempted to apprehend “several Hamas terrorists in order to stop a cell that was planning on executing a terrorist attack,” according to IDF spokesperson Lt Col Amnon Shefler.

The Palestinian Ministry of Health confirmed the deaths, adding that one of those killed was 16 years old.

An IDF officer and a soldier were also seriously injured during the raid in the village of Burqin, west of Jenin, to arrest “terrorists belonging to Hamas’ military infrastructure,” Shefler said.

Israeli Prime Minister Naftali Bennett, en route to New York to address the United Nations General Assembly, said security forces took action overnight “against Hamas terrorists who were about to carry out terrorist attacks in real-time,” in a statement released on Sunday.

He added that “the soldiers and commanders in the field acted as expected; they engaged the enemy and we back them completely.”

However, Palestinian Authority President Mahmoud Abbas condemned the raids, calling them “crimes” and “field executions,” according to a statement published by the Palestinian WAFA news agency.

Abbas warned that the “continuation of this policy will lead to an explosion of the situation and to more tension and instability.”

Tensions in the region have remained high after the 11-day conflict in May between Hamas-led militants in Gaza and Israel. Though a fragile ceasefire is in place, violence has occasionally erupted.

In a statement, Hamas spokesman Abd al-Latif al-Qanou blamed the “the continuous security coordination” between Israel and the Palestinian Authority.