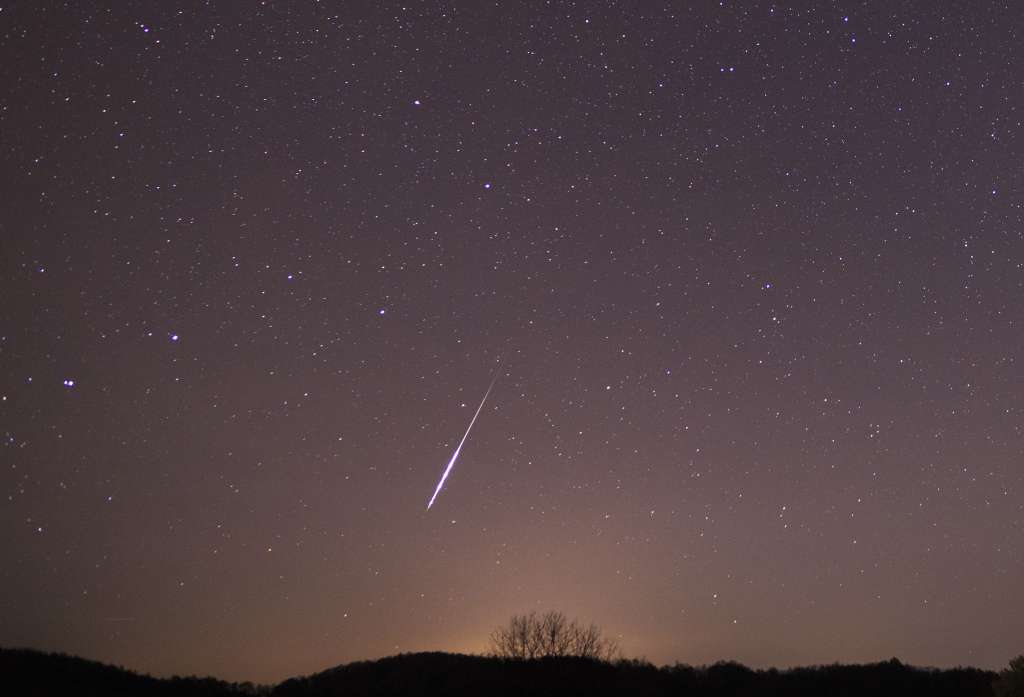 Photo by Marko Korosec/Solent News/Shutterstock (5386934d) Taurid meteor shower Taurid meteor shower, Brkini, Slovenia - 12 Nov 2015 The sky lights up with spectacular colours as rare meteors seen only once a year soar at 62,000mph through the air. During the annual Taurid showers, meteors are visible from Earth and can be seen producing mesmerising emerald, red and white patterns in the night-sky. In the already starry sky, one meteor leaves a long white trail as it flies through the mesosphere - a layer inside the Earth's atmosphere around 50 miles away. Another meteor can be seen soaring inside the Earth's atmosphere, creating a stunning emerald glow as it descends. This spectacular light show was taken by meteorologist Marko Korosec, 34, when he stayed up all night in the hilly terrain of Brkini, Slovenia. Mr Korosec, who lives near Brkini in Slovenia, is a keen observer of meteors and said the Taurid shower is named after their radiant point in the constellation Taurus, where they come from in the sky. He explained that the colourful meteors hit speeds of around 28 kilometres per second (62,634mph).

(CNN) — A spectacle of light will shine Thursday evening as the South Taurid meteors shoot across the sky.

The meteor shower peaks in the late hours of November 4 through the dawn of November 5, according to EarthSky. The exact peak of the shower is 1 a.m. ET, or 5 a.m. GMT, EarthSky said.

Taurids are occasionally known for fireballs, or meteors often larger than 3.3 feet (1 meter) across that shine exceptionally bright, according to NASA.

The Southern Taurids originate from the Comet 2P/Encke, according to EarthSky, and viewers can expect to see around five meteors per hour.

Meteors will be visible in nearly every part of the world except the southern polar regions due to their long hours of daylight this time of year, Robert Lunsford, an advisor at the American Meteor Society said.

Viewers won’t have to worry about the moon’s light obstructing their view because there’s a new moon Thursday night, according to the Old Farmer’s Almanac.

Throughout the lunar cycle, the sun illuminates part of the moon. When it’s a new moon, the half the sun is shining on is facing away from Earth, which means the sky will be darker than usual, according to NASA.

EarthSky shared some tips on how to see the meteor shower.

For best viewing conditions, go to an area with little to no artificial light where a large area of the sky is visible. Patience is the name of the game when it comes to spotting meteor showers, so grab a chair and a blanket and get comfortable.

There are more meteor showers you can catch during the remainder of 2021, according to EarthSky’s 2021 meteor shower guide:

A partial eclipse of the moon will take place November 19, and skywatchers in North America and Hawaii can view it between 1 a.m. ET and 7:06 a.m. ET.

The last month of the year will kick off with a total eclipse of the sun on December 4. It won’t be visible in North America, but those in the Falkland Islands, the southern tip of Africa, Antarctica and southeastern Australia will be able to spot it.

Skywatchers will have multiple opportunities to spot the planets in our sky during certain mornings and evenings throughout 2021, according to the Farmer’s Almanac planetary guide.

It’s possible to see most of these with the naked eye, with the exception of distant Neptune, but binoculars or a telescope will provide the best view.

Mercury will shine in the night sky from November 29 to December 31.

Venus, our closest neighbor in the solar system, will appear in the western sky at dusk in the evenings through December 31. It’s the second-brightest object in our sky, after the moon.

Mars will make its reddish appearance in the morning sky between November 24 and December 31.

Jupiter, the largest planet in our solar system, is — when visible — the third-brightest object in our sky. Look for it in the evenings through December 31.

Saturn’s rings are only visible through a telescope, but the planet itself can still be seen with the naked eye in the evenings now through December 31.

Binoculars or a telescope will help you spot the greenish glow of Uranus in the evenings from November 4 to December 31. It will be at its brightest through December 31.

And our most distant neighbor in the solar system, Neptune, will be visible via a telescope during the evenings through December 31. It’s at its brightest through November 8.