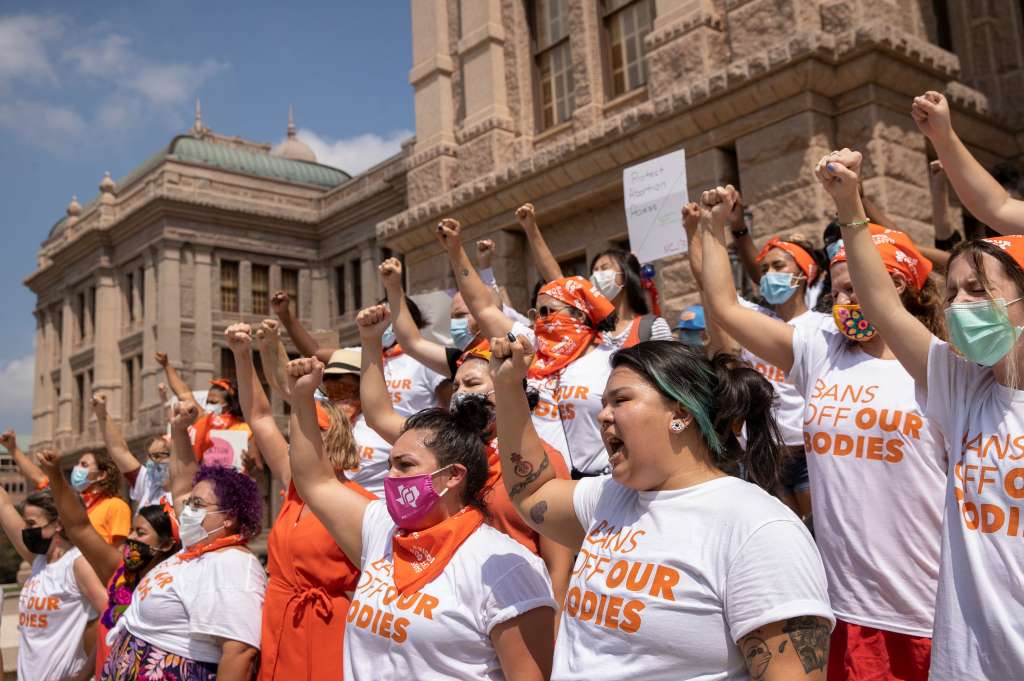 FILE - In this Sept. 1, 2021 file photo, women protest against the six-week abortion ban at the Capitol in Austin, Texas. Even before a strict abortion ban took effect in Texas this week, clinics in neighboring states were fielding more and more calls from women desperate for options. The Texas law, allowed to stand in a decision Thursday, Sept. 2, 2021 by the U.S. Supreme Court, bans abortions after a fetal heartbeat can be detected, typically around six weeks. (Jay Janner/Austin American-Statesman via AP File)

(CNN) — A federal judge Wednesday set a hearing date for October 1 to consider a request from the Justice Department to freeze a Texas law that bars most abortions after six weeks of pregnancy.

The judge’s order means that the law will remain in place for now.

Just after the judge’s move, the department asked him to move more aggressively and hold a hearing on September 20 to decide whether the law should be blocked even on a temporary basis.

The department and critics of the law are desperate to halt it, saying that even waiting until October 1 will endanger too many women.

Although the Justice Department had asked the judge to immediately freeze the law, the government could still prevail after a full-blown hearing. The court’s order signals that the judge, Robert Pitman of the Western District of Texas, wants the opportunity to issue a formal ruling, pending additional litigation, before Texas could appeal to the conservative New Orleans-based federal appeals court.

The new filing puts the court in an unusual position. It is trying to move cautiously, aware that anything it does will be appealed to that court. But the DOJ is suggesting the district court judge is moving too cautiously.

If Pitman ultimately issues a preliminary injunction, some clinics could resume providing abortions currently covered under the law. But others may decline to do so until appeals to higher courts have run their course. That’s because, under the law, a clinic could still be liable if it performed an abortion prohibited by the law while the court’s order was in effect, if that same order was later reversed by a higher court.

In his brief order, Pitman noted that Texas “wished to be heard” before the court resolves the issue so he set out an expedited briefing schedule. He asked that Texas respond by September 29 and that DOJ can then respond before October 1.

“Judge Pitman seems to be going by the book here,” said Steve Vladeck, CNN legal analyst and professor at the University of Texas School of Law.

“The Court of Appeals already cut off his effort to hold a similar hearing in the challenge to SB8 brought by Texas abortion providers,” Vladeck said. “By not issuing a temporary restraining order here, he’s effectively preventing Texas from asking the Court of Appeals to also block this hearing before it happens.”

In court papers filed late Tuesday night, the Justice Department argued that the law has “gravely and irreparably impaired women’s ability to exercise their constitutional right to an abortion across the State.”

DOJ says that clinics in Texas have ceased to provide abortions after six weeks, absent a medical emergency, and one Planned Parenthood clinic that had provided 205 abortions in the week before the law went into effect only provided 52 abortions the week after.

A 5-4 Supreme Court allowed the Texas law to remain in effect earlier this month in a separate legal challenge. Under the law, abortion is prohibited when a fetal heartbeat is detected, which is often before a woman knows she is pregnant. There is no exception for rape or incest, although there is an exemption for “medical emergencies.”

In passing the law, the Texas legislature adopted a novel legal strategy blocking Texas officials from enforcing the law, and instead allowing private citizens — anywhere in the country — to bring a civil suit against anyone who assists a pregnant person seeking an abortion in violation of the law.

According to the Justice Department, clinics in neighboring states are “receiving panicked calls from patients in Texas and continue to see large increases in minor patients, survivors of sexual assault, patients with a patients with a maternal or fetal diagnosis, and patients with later gestational ages.”

Women with the ability to travel, the brief said “are being forced to travel hundreds — and sometimes thousands — of miles to obtain an abortion under harrowing circumstances in the middle of a COVID surge,” the DOJ argued in court papers.