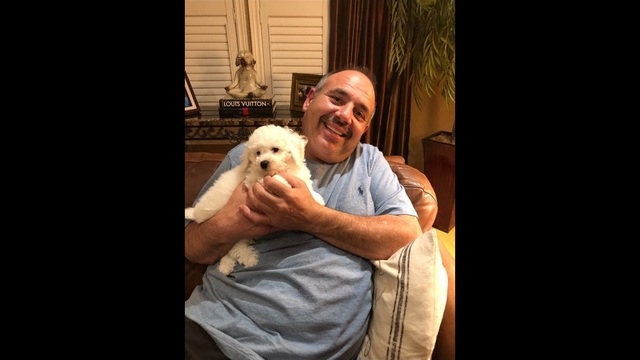 (WSVN) - A touching video of a man meeting his new puppy is going viral and warming hearts everywhere.

James Xuereb’s family recorded video of him getting his new Bichon Frise puppy, Lumo, as an early birthday gift.

According to Fox 26, his daughter Jaleen started the video by handing him a card, telling him to read it aloud. But once James saw the puppy picture on the front, the 52-year-old immediately broke down sobbing, unable to speak through his tears.

Why the strong reaction? It turns out, James has always been extremely close with his pets. Over 13 years ago, his family said James was suffering from depression, so his wife Wanda brought home a Bichon puppy named Nemo to cheer him up.

James immediately fell in love with the pup.

“He had an attachment to him. He leaned on him for anything and everything,” Jaleen said.

Two years later, the family welcomed another Bichon named Lucy, and James doted on both dogs as if they were his kids.

Sadly, little Lucy died back in August at the age of 11 from cardiac arrest. Then just two weeks later, the family received more heartbreaking news: Nemo’s health was quickly deteriorating as his lungs filled with fluid, making it hard for him to breathe.

The Xuereb family made the devastating decision to put the 13-year-old dog to sleep in order to end his suffering.

“My dad was on edge,” Jaleen told Fox 26. “He didn’t want to talk about [Lucy and Nemo]. He would leave the room if we did. Or he would start crying.”

After several months, Wanda decided it was time to bring a new dog home, and found Fern Klapman-Flett’s Bichon Lovers in Simcoe, Ontario.

When Wanda and her daughters Jaleen and Jade went to visit, one pup appeared to choose them.

“When we walked through the door, one came up to us and kept pulling on my mom’s pants,” Jaleen recalled. “That’s how we knew.”

The family brought the little dog home, naming him Lumo: L-U for Lucy, and M-O for Nemo. And to introduce James to Lumo, the family wrote inside the card:

“Hi, my name is Lumo and I am a boy Bichon. No, I am not Nemo, nor could I ever be Lucy, but my mommy brought me to bring you some happiness back into your life. So, as we walk in this journey of life together, may we create our own wonderful memories and reclaim the beautiful memories that you had with Nemo and Lucy. Love, Lumo.”