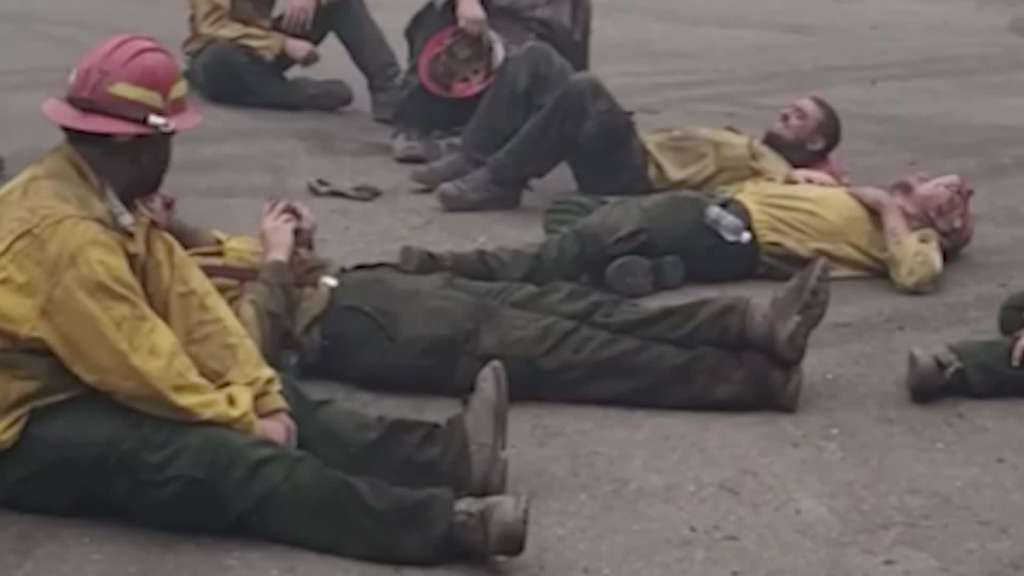 (CNN) — Sprawled on a smoky street, a crew of Oregon firefighters belted out a song after a long day fighting fires.

Take me out to the fire.

Take me out to the line.

Bring me some sawyers and hazel hoes.

I don’t care if I ever get home.

The Grizzly Firefighters from The Dalles, Oregon, had just wrapped a 14-hour day of battling the Lionshead Fire on Monday near the community of Detroit, said crew boss Theodore Hiner.

Even after a grueling day, Hiner said his crew still made him laugh, he wrote on Facebook.

They spent the day “cutting line,” or building a perimeter of mineral soil to keep the fire from spreading, he said.

Yet they still had enough spirit to come up with a parody of “Take Me Out to the Ball Game” using firefighting terms for lyrics. For those not in the know, a hazel hoe is used to trench and clear the area, while a sawyer is a person trained to down limbs and trees during wildfires.

Typically, fires consume about 500,000 acres a year in Oregon, Gov. Kate Brown said. But in just one week, “we burned over a million acres of beautiful Oregon.”

The 20-person crew has been in the Detroit area for 10 days now, Hiner said.

Hiner says he hails from Sweet Home, Oregon, and has been fighting fires since 1996. He said he’s “never missed a season.”

While he and his crew were fighting the Lionshead Fire, his family was forced to evacuate their home.

“Yes my house was in danger,” Hiner said in between fighting fires. “Thankfully, we made it out OK.”

His wife, children and dogs evacuated their home for four days. Lucky for this firefighter, everyone is safe.

As for the rest of the song, here you go:

You know we want the most days.