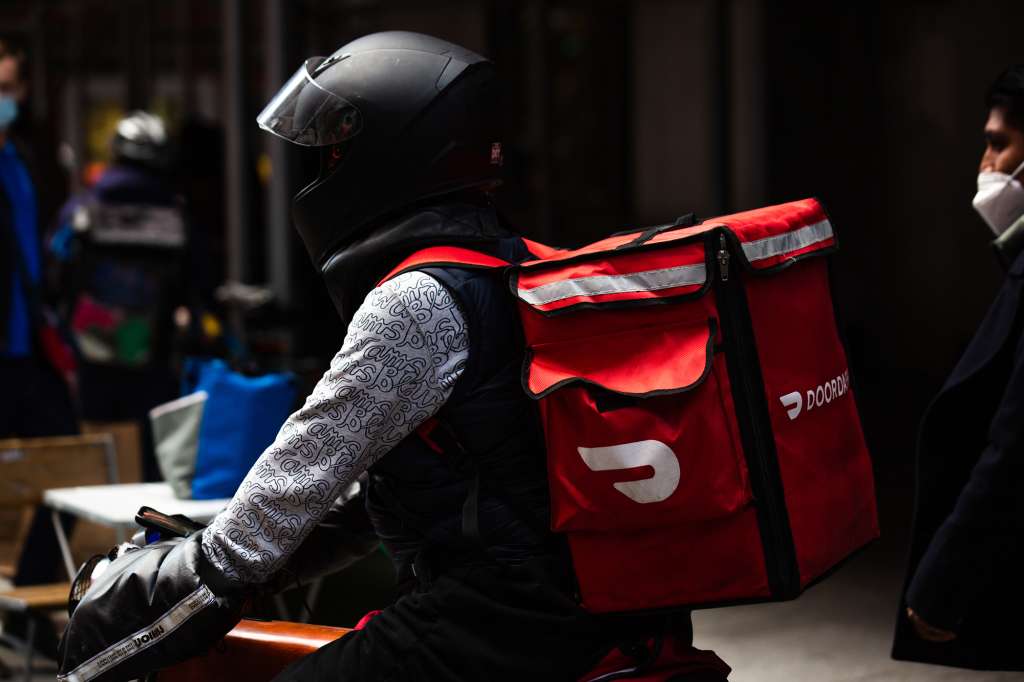 A demonstrator wearing a Doordash backpack in Times Square during a march for food delivery workers rights in New York, U.S., on Wednesday, April 21, 2021. Delivery workers are calling on the city to grant them further labor protections, including enhanced safety provisions, access to bathrooms, and more regulation of the apps, Gothamist reports. Photographer: Paul Frangipane/Bloomberg via Getty Images

(CNN) — DoorDash, Grubhub, and Uber Eats are suing New York City over its decision to make pandemic-era caps on the fees they charge restaurants permanent. The companies argue that the restrictions amount to government overreach and ultimately hurt consumers.

New York City last year started restricting what third-party platforms can charge for delivery services as a way to help restaurants cope with pandemic restrictions. Under the rules, the platforms can bill restaurants 15% of a given order for delivery, plus an additional 5% for fees other than credit-card fees, like marketing which are tacked on as well. The city council voted in late August to make the limitations permanent.

DoorDash, which owns Caviar; Grubhub, owner of Seamless; and Portier LLC, the Uber subsidiary that operates Uber Eats and Postmates, filed the lawsuit Thursday in federal court in the Southern District of New York. In addition to damages, they are seeking an injunction against the city preventing it from enforcing the rule.

“The Ordinance is unconstitutional because, among other things, it interferes with freely negotiated contracts between platforms and restaurants by changing and dictating the economic terms on which a dynamic industry operates,” the lawsuit said.

A permanent cap likely means that they will have to renegotiate or end contracts with restaurants and scale back some services, the plaintiffs said in the suit. It would also likely mean raising fees for people who order delivery, they warned in the lawsuit.

“Left unchecked, the Ordinance sets a dangerous precedent,” they wrote in the suit.

“The initiative is legally sound and we’ll defend it in court,” the city’s law department told CNN Business in response to a request for comment on the suit.

Proponents of making the fee caps permanent have said that they are critical to ensuring the survival of the city’s restaurants, which have been hit hard in the pandemic. “By limiting, without expiration, the fees charged to restaurants by third-party food delivery services, we are ensuring that mom-and-pop shops have a real opportunity to recover and thrive,” said NYC Council Member Francisco Moya in a statement in August.

Restaurants have a complicated relationship with third-party delivery providers. Commission fees place a heavy burden on restaurants, which operate on thin margins in the best of times.

Some restaurants told CNN Business late last year that high fees have even put them in the red on delivery orders. But they also said at the time that they feel that the cost of avoiding these platforms is even higher — if customers can’t find them on a delivery app, they might as well just order from a different restaurant instead.

Early in the pandemic, when restaurants had to close their dining rooms entirely or limit capacity, lawmakers across the country began capping delivery fees to ease the financial burden on restaurants, which were relying heavily on delivery to make ends meet.

New York is not the only city that decided to make its cap permanent. San Francisco made a similar move this summer. DoorDash and Grubhub filed a suit against San Francisco in July. John Cote, communications director for the city attorney’s office, told the San Francisco Chronicle at the time of the filing they would “review the lawsuit once we’ve been served with it, and we will address it in court.” The case is ongoing.