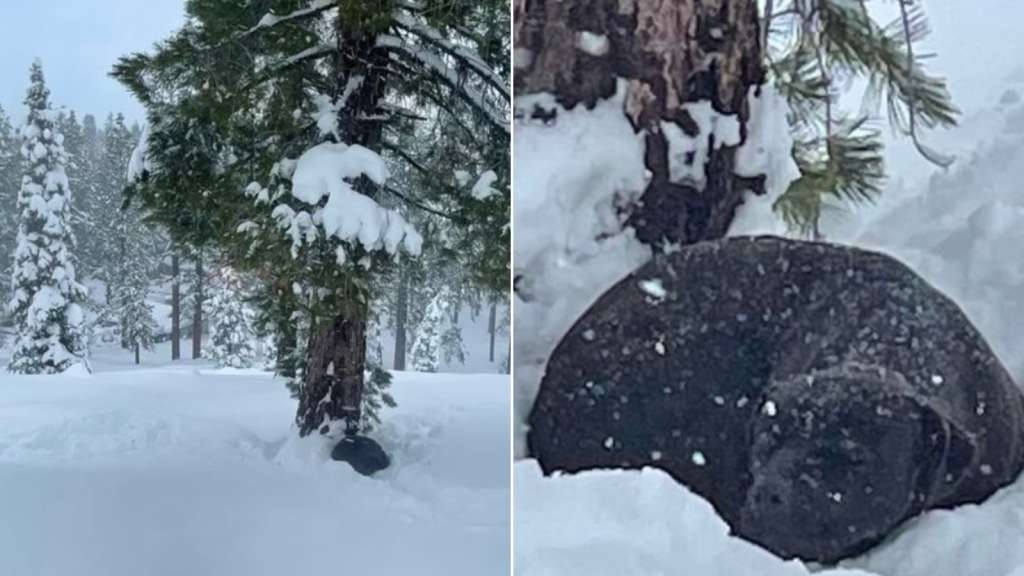 Russ was found curled up in a ball on December 16, 2021, after missing since August. Mandatory Credit: Tahoe PAWS & TLC 4 Furry Friends

(CNN) — When Ricardo Rodriguez evacuated from the Caldor Fire in early September, he wasn’t sure if he’d ever see his dog again.

Rodriguez was on a camping trip in the Lake Tahoe area with four of his friends and his 3-year-old pitbull-mix, Russ.

Russ ran away in late August after getting startled by someone, Rodriguez told CNN. He and his friends spent hours looking for Russ and called local shelters to report him missing.

As the days went on, the fires started and engulfed the area and the community was mandated to evacuate, forcing Rodriguez to leave without Russ.

The Caldor Fire was responsible for destroying nearly 1,000 structures, including homes and businesses. It also consumed more than 200,000 acres of land near the California-Nevada border.

“After months of not hearing back from anyone, I assumed he was in good hands with a different owner,” Rodriguez told CNN, “I was hopeful that one day he would return.”

Flash forward to December 16 when a skier near Twin Peaks, located west of South Lake Tahoe, noticed a dog bundled up in the snow near a tree.

The non-profit group works to search and rescue missing or lost animals. Jones told CNN she was unable to attend this rescue mission because she was already working on another, so she sent out two of her volunteers.

That’s when Leona Allen and Elsa Gaule suited up and began the mission.

“We didn’t even hesitate,” Allen told CNN, “This was a one-shot deal, we either got him or he didn’t survive the night.”

Allen has been volunteering with Tahoe PAWS for about three years, and this was Elsa’s first mission with the group.

The rescue mission was a team effort between the two women and Officer Shumaker, who provided them with a sled.

The women began the trek up the steep, snowy hill in below-freezing temperatures.

Allen followed the tracks in the snow to guide her to the pup. “In the well of a fur tree was a dark mass,” Allen said, “I thought it was him, but he wasn’t moving.”

That’s when Russ lifted his head and opened his eyes.

“I was about halfway up the hill and I heard Leona start yelling,” Gaule told CNN, “At first I wasn’t sure what she was yelling about, but she said, ‘Elsa I found him and he’s alive!'”

The next step was rescuing Russ safely. He was very scared and even let out a slight growl at the women, but both told CNN that this was out of fear and not aggression.

After attempting to lure him with treats, Gaule decided to slowly reach toward the dog.

“I took my hand and put it under his chin, and he rested his head on my hand right away,” Gaule said. That’s when they knew he was trusting and ready to be saved.

They moved methodically to get Russ and themselves to safety down the mountain.

Russ was wrapped in blankets and placed on Allen’s lap in the sled, which Gaule guided slowly in their descent.

“Every second counts,” Allen said, “This dog had been up there most of the day.” The entire mission took several hours.

Once they reached the bottom of the hill Russ was given to Officer Shumaker, who then transported him to the vet.

Russ was deemed completely healthy despite being alone for not only four months, but through fires and freezing weather.

“Dogs go into survival mode,” Jones told CNN, “They’re super strong and super smart … it’s like a light switch goes off in their brain and survival mode kicks in.”

Russ stayed in the shelter for a few days while they used his microchip to search for his owner.

Both Allen and Gaule say they visited Russ while he stayed there and noted how sweet and gentle he was toward everyone.

“Pitbulls have a bad reputation, but that is not deserved,” Allen added. She says they were face-to-face the entire journey down, but not once was she worried about him being aggressive.

Rodriguez was then tracked down and informed of Russ’ whereabouts. “I was ecstatic,” he said, “I was looking forward to helping my dog find his way back home.”

On December 26, the two were reunited.

All parties involved in this mission made note of the team effort that took place. Without the help of every person, Russ wouldn’t be reunited happily with his owner.