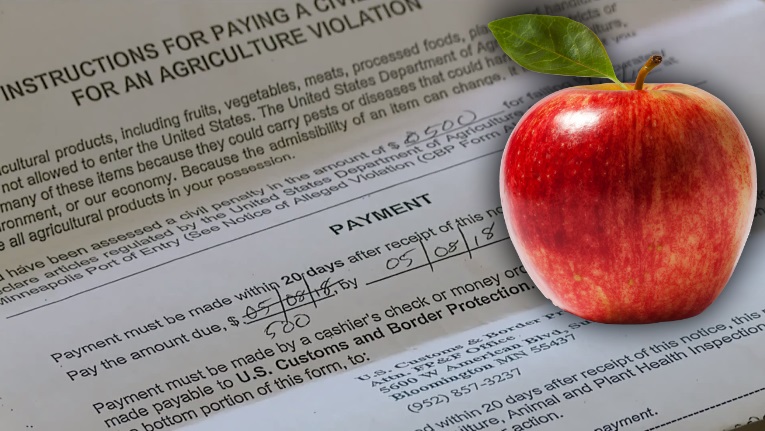 DENVER (AP/WSVN) — The U.S. Customs and Border Patrol has fined a woman $500 for not declaring she was bringing a free apple into the U.S. that she received on her Delta Air Lines flight from Paris.

Crystal Tadlock tells Fox 31 in Denver that flight attendants had passed out the apples toward the end of her flight from France. She decided to put it in her carry-on to save for the second leg of her trip, from Minneapolis to Denver. Her bag was randomly searched by Customs.

Tadlock says the agent pulled out the apple, which was in a plastic bag with a Delta logo.

“He had asked me if my trip to France was expensive and I said, ‘Yeah.’ I didn’t really get why he was asking that question, and then he said, ‘It’s about to get a lot more expensive after I charge you $500,'” Tadlock said.

She says she’s frustrated that the customs agent ticketed her, even though the snack clearly came from the airline.

“It’s really unfortunate someone has to go through that and be treated like a criminal over a piece of fruit,” she said, noting she could also lose her Global Entry status in the incident.

Delta says it recommends all passengers comply with Customs regulations.

Customs declaration forms ask passengers if they are bringing any fruits or vegetables into the country.

Tadlock says she plans to fight the charge in court.