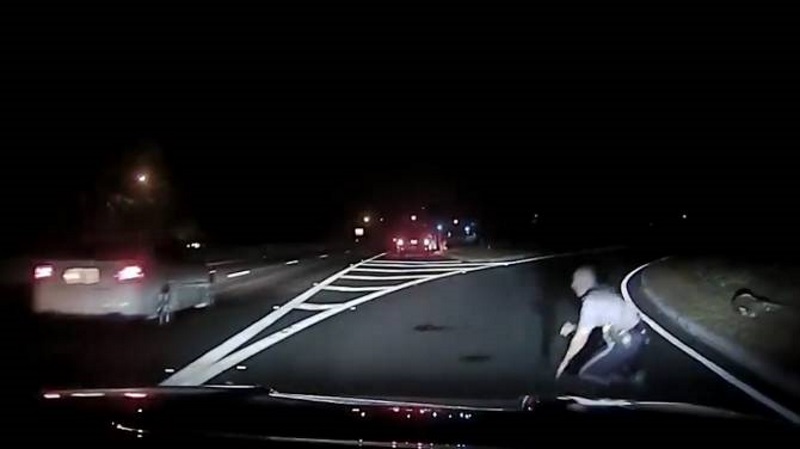 Patrolman Kyle Rickvalsky with Manchester Police was investigating a crash involving a deer on the side of a highway earlier this month.

With his patrol car stopped and its emergency lights on, Rickvalsky started walking toward the driver’s side of his vehicle. That’s when he noticed an oncoming car, which swerved to avoid hitting his cruiser and almost hit him instead.

“With some quick thinking and ninja-like reflexes, Ptl. Rickvalsky was able to dive and roll out of the way of a vehicle that failed to move over,” the police department wrote on Facebook.

Dash cam footage from his patrol car shows Rickvalsky on screen walking toward his vehicle. He briefly walks out of sight, but can be heard shouting before he is seen dropping and rolling in front of his car to avoid being hit.

Rickvalsky quickly informed dispatch of the incident, and the driver was stopped minutes later with a citation for violating the “move over” law.

The agency said Rickvalsky only walked away with a few scrapes, but said they just released the footage as a reminder to drivers about the importance of moving over for police, fire crews, paramedics and tow truck drivers.