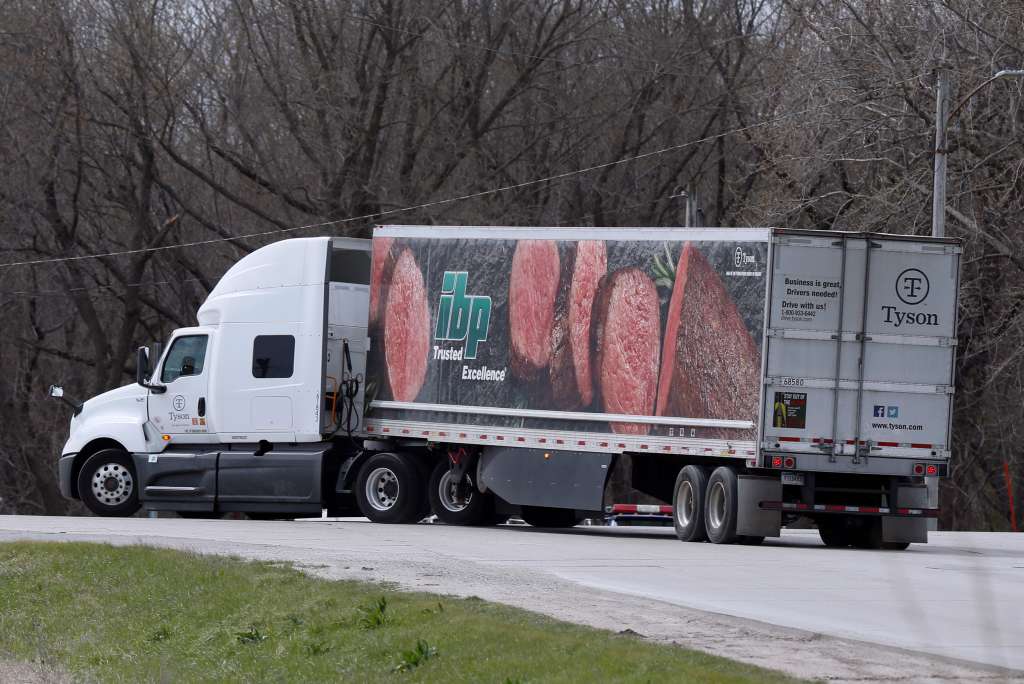 FILE - In this April 22, 2020, file photo, a truck leaves the Tyson Foods pork plant in Perry, Iowa. Even though meatpacking plants have rebounded from the worst of the coronavirus outbreak, it will take months to work through the backlog of millions of cattle and pigs that was created this spring when dozens of plants were closed. That will continue to create headaches for farmers and ranchers who are struggling to find space for all those animals and face weak prices when they do sell them. (AP Photo/Charlie Neibergall, File)

(CNN) — At the height of the pandemic, as the coronavirus infected tens of thousands of meat industry workers and caused hundreds to die, executives at the nation’s largest meat producers were aware of the transmission risk in their plants and successfully lobbied the Trump White House and the USDA to circumvent coronavirus prevention measures and regulations, according to the latest findings of a congressional investigation.

The House Select Subcommittee on the Coronavirus Crisis, which launched its probe in February 2021 into meatpackers’ Covid response, also found that meat processors’ warnings about the nation being on the brink of a meat shortage were not based in fact, and that industry experts at the time believed them to be intentionally misleading.

“The Select Subcommittee’s investigation has revealed that former President Trump’s political appointees at USDA collaborated with large meatpacking companies to lead an Administration-wide effort to force workers to remain on the job during the coronavirus crisis despite dangerous conditions, and even to prevent the imposition of commonsense mitigation measures,” committee chairman, US Rep. James Clyburn, said in a statement Thursday.

The North American Meat Institute, an industry trade group, criticized the committee’s report as “partisan” and said it “distorts the truth about the meat and poultry industry’s work to protect employees during the Covid-19 pandemic.”

“The House Select Committee has done the nation a disservice. The Committee could have tried to learn what the industry did to stop the spread of Covid among meat and poultry workers, reducing positive cases associated with the industry while cases were surging across the country. Instead, the Committee uses 20/20 hindsight and cherry picks data to support a narrative that is completely unrepresentative of the early days of an unprecedented national emergency,” Julie Anna Potts, president and CEO of the North American Meat Institute, said in a statement.

The investigation centered on meat producers Tyson, Smithfield, JBS USA, Cargill and National Beef along with the Occupational Safety and Health Administration and its response to worker illnesses. Meat plants became a hotbed for Covid outbreaks in the first year of the pandemic as workers grappled with long hours in crowded work spaces.

The initial results of the probe, released last October, showed infections and deaths among workers in plants owned by those five companies in the first year of the pandemic were significantly higher than previously estimated, with over 59,000 workers infected and at least 269 deaths.

The report cited examples, based on Internal meatpacking industry documents, of at least one company ignoring warnings by a doctor of the risk of rapid transmission of the virus in their facilities.

For example, the report found that a JBS executive received an April 2020 email from a doctor in a hospital near JBS’ Cactus, Texas, facility saying, “100% of all Covid-19 patients we have in the hospital are either direct employees or family member[s] of your employees.” The doctor warned: “Your employees will get sick and may die if this factory continues to be open.”

The emails prompted Texas Governor Greg Abbott’s chief of staff to reach out to JBS, but it remains unclear whether JBS ever responded to the email, the report said.

“This coordinated campaign prioritized industry production over the health of workers and communities and contributed to tens of thousands of workers becoming ill, hundreds of workers dying, and the virus spreading throughout surrounding areas,” said Rep. Clyburn.

“The shameful conduct of corporate executives pursuing profit at any cost during a crisis and government officials eager to do their bidding regardless of resulting harm to the public must never be repeated,” he said.

In a response to CNN’s request for comment, JBS, in an email, did not address the doctors warning, highlighted by the committee.

“In 2020, as the world faced the challenge of navigating Covid-19, many lessons were learned, and the health and safety of our team members guided all our actions and decisions. During that critical time, we did everything possible to ensure the safety of our people who kept our critical food supply chain running,” said Nikki Richardson, a spokeswoman for JBS USA & Pilgrim’s.

The investigation surfaced examples of some meatpacking industry executives acknowledging that being transparent about the lax mitigation measures and high infections rates in plants would cause alarm.

Meatpacking companies and the United States Department of Agriculture “jointly lobbied the White House to dissuade workers from staying home or quitting,” according to the report.

Further, meatpacking companies successfully lobbied USDA officials to advocate for Department of Labor policies that deprived their employees of benefits if they chose to stay home or quit, while also seeking insulation from legal liability if their workers fell ill or died on the job, according to the report.

The probe found that in April 2020, the CEOs of JBS, Smithfield, Tyson and other meatpacking companies asked Trump cabinet member and then Secretary of Agriculture Sonny Perdue to “elevate the need for messaging about the importance of our workforce staying at work to the POTUS or VP level,” and to make clear that “being afraid of Covid-19 is not a reason to quit your job and you are not eligible for unemployment compensation if you do.”

On April 28th, 2020, President Trump signed an executive order directing meat packing plants to follow guidance being issued by the CDC and OSHA on how to keep workers safe, so processing plants could stay open

Sec. Perdue would later send a letter to governors and to the leaders of meat processing companies.

“Meat processing facilities are critical infrastructure and are essential to the national security of our nation. Keeping these facilities operational is critical to the food supply chain and we expect our partners across the country to work with us on this issue.”

The Committee report said meatpacking companies and lobbyists worked with USDA and the White House in an attempt to prevent state and local health departments from regulating coronavirus precautions in plants.

Calling the contents of the report deeply disturbling, a spokesperson for the USDA said “many of the decisions made by the previous administration are not in line with our values. This administration is committed to food safety, the viability of the meat and poultry sector and working with our partners across the government to protect workers and ensure their health and safety is given the priority it deserves.”

A spokesman for Perdue, who is currently Chancellor of the University of Georgia, said Perdue “is focused on his new position serving the students of Georgia” and did not provide a comment on the committee report.

Former President Trump has not responded to CNN Business’ request for comment.

As their workers fell ill with the virus, several meat suppliers were forced to temporarily shut plants in 2020 and their companies’ executives warned the situation would put the US meat supply at risk.

The report slammed those warnings as “flimsy if not outright false.”

“Just three days after Smithfield CEO Ken Sullivan publicly warned that the closure of a Smithfield plant was ‘pushing our country perilously close to the edge in terms of our nation’s meat supply,” he asked industry representatives to issue a statement that ‘there was plenty of meat, enough . . . to export,” while Smithfield told meat importers the same, the report said.

At the time, food experts told CNN Business that while there were meat shortages, at times, various cuts of meat might not be available.

Tyson said via an email response that it was reviewing the report.

Smithfield said it took “every appropriate measure to keep our workers safe” when it encountered a “first-of-its-kind challenge” two years ago.

“To date, we have invested more than $900 million to support worker safety, including paying workers to stay home, and have exceeded CDC and OSHA guidelines,” Smithfield spokesman Jim Monroe, said in an email to CNN Business.

“The meat production system is a modern wonder, but it is not one that can be re-directed at the flip of a switch. That is the challenge we faced as restaurants closed, consumption patterns changed and hogs backed-up on farms with nowhere to go. The concerns we expressed were very real and we are thankful that a true food crisis was averted and that we are starting to return to normal…. Did we make every effort to share with government officials our perspective on the pandemic and how it was impacting the food production system? Absolutely,” he said.

Cargill and National Beef could not immediately be reached for comment.

“Today’s report confirms what we already knew — the Trump Administration’s negligence and unethical actions endangered America’s meatpacking workers and their families at the height of the pandemic,” the United Food and Commercial Workers International Union said in a statement.

UFCW, which represents more than 250,000 workers in meatpacking plants, said the findings indicate a “desperate need of a comprehensive meat processing safety bill.”

“As a union that represents the largest share of America’s meatpacking workers….we are fully committed to ensuring that meatpacking jobs include the health and safety standards these skilled workers deserve and call on all lawmakers to immediately take steps to make that happen.”

The committee said its report was based on more than 151,000 pages of documents collected from meatpacking companies and interest groups, calls with meatpacking workers, union representatives, and former USDA and OSHA officials, among others.