Chinese mother tries to mail her baby to an orphanage 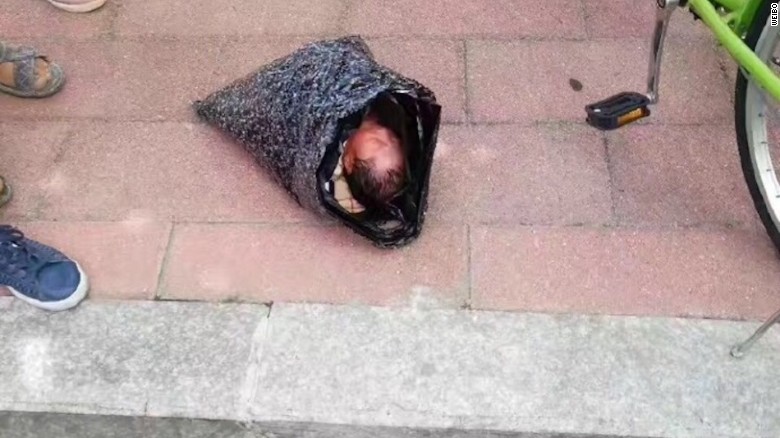 (CNN) — A 24-year-old woman is under police investigation in Fuzhou, China after she attempted to mail her newborn baby to an orphanage wrapped in plastic bags.

The baby is currently in a stable condition at a hospital in the southeastern city. Fuzhou police said in a statement Thursday the mother, surnamed Luo, was in custody for suspected child abandonment as investigations continue.

Luo placed the baby girl inside several black plastic bags Wednesday and then refused to let a courier inspect the contents of her package when he arrived to pick it up, local media reported.

The courier, already on his way for delivery, became suspicious when he detected movement and noises from inside the package — and was shocked to find a live baby when he opened it, according to local media.

Life not in danger

In a cell phone video that has gone viral on Chinese social media, nearby residents are seen to care for the baby as police officers and hospital staff arrive at the scene.

A man in a blue shirt dips a cotton swab in bottled water and uses it to wipe the baby’s lips, as local temperatures hit a scorching 37 degrees Celsius (98.6 degrees Fahrenheit). The baby’s tiny fingers move as the man and others try to keep her hydrated.

Speaking to CNN Friday, an official at the Jin’an District Hospital, where the baby was taken, said “her life isn’t in any danger.”

“Police have identified the mother, who said she would take the baby home,” the official said.

Many Chinese internet users were outraged by such a prospect.

“Giving the baby back to the parents — so they can abandon her again?” one user said in a widely-shared post on Twitter-like service Weibo.

“Such people don’t deserve to be parents and the state should deprive them of such a right.”

There are around 460,000 orphans in China, according to the latest statistics from the Ministry of Civil Affairs. A retired ministry official told CNN in 2014 there was only one social worker to every 10 abandoned children, many of them suffering from disabilities.