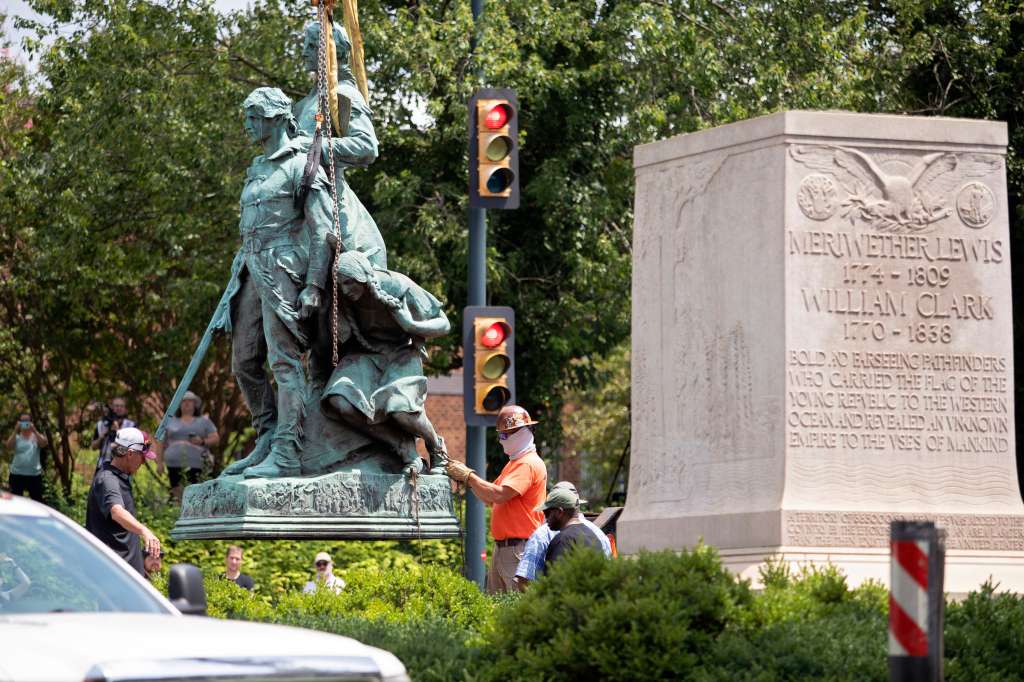 The statue of Meriwether Lewis, William Clark and Sacagawea is removed from Charlottesville, Virginia on July 10, 2021. - The southern US city of Charlottesvill took down two statues honoring Civil War generals for the pro-slavery Confederacy which had become the focus of protests, including a deadly 2017 rally of white supremacists. Tensions over the fate of the Lee statue led to violence in August 2017, when a white nationalist drove his car into a crowd of demonstrators in Charlottesville, killing a woman. (Photo by Ryan M. Kelly / AFP) (Photo by RYAN M. KELLY/AFP via Getty Images)

(CNN) — A Lewis and Clark statue featuring Sacagawea (also spelled Sacajawea), a famous Native American woman, was taken down in Charlottesville, Virginia, making it the third statue to be taken down in the city.

“It was a very offensive statue, and not only did it delineate me as a Native American, it delineated our women and their role in society,” said Rose Abrahamson, a Native American woman, in a video obtained by CNN affiliate WVIR-TV of a Charlottesville City Council emergency meeting.

The emergency meeting, held Saturday, resulted in a unanimous vote to remove the statue, according to a tweet from the city. The statue was promptly removed following the removal of Confederate statues featuring Robert E. Lee and Thomas J. “Stonewall” Jackson.

In video of the statue’s removal, crowds are seen cheering as the bronze sculpture was hoisted off the base and loaded onto a flatbed truck.

The idea to create the Lewis-Clark-Sacagawea statue began in 1912, when “pleas from prominent citizens” led University of Virginia donor Paul Goodloe McIntire to fund the creation of the statue. Charles Keck sculpted the statue, which was given to Charlottesville in 1919, according to the Charlottesville Albemarle Convention and Visitors Bureau.

Sacagawea served as an interpreter and guide for Lewis and Clark, who were tasked with exploring the western part of the US by President Thomas Jefferson, according to the National Women’s History Museum. Sacagawea, along with her baby and husband, traveled with a band of more than 30 men, the museum said.

“Sacagawea was valuable to the expedition because her presence signified peace and trustworthiness,” the museum said. ”A group of men traveling with a woman and her baby appeared less menacing than an all-male group, which could be mistaken for a war party.”

The National Park Service said Sacagawea is “one of the most depicted Native American women in history” who has “more statutes than any other American woman.”

Removal of the statue comes more than a year after the death of George Floyd sparked international protests and reignited a national conversation about race, police brutality and social injustice.Across the US, names of buildings and even certain brands of food have been changed, and numerous Confederate statues have come down.