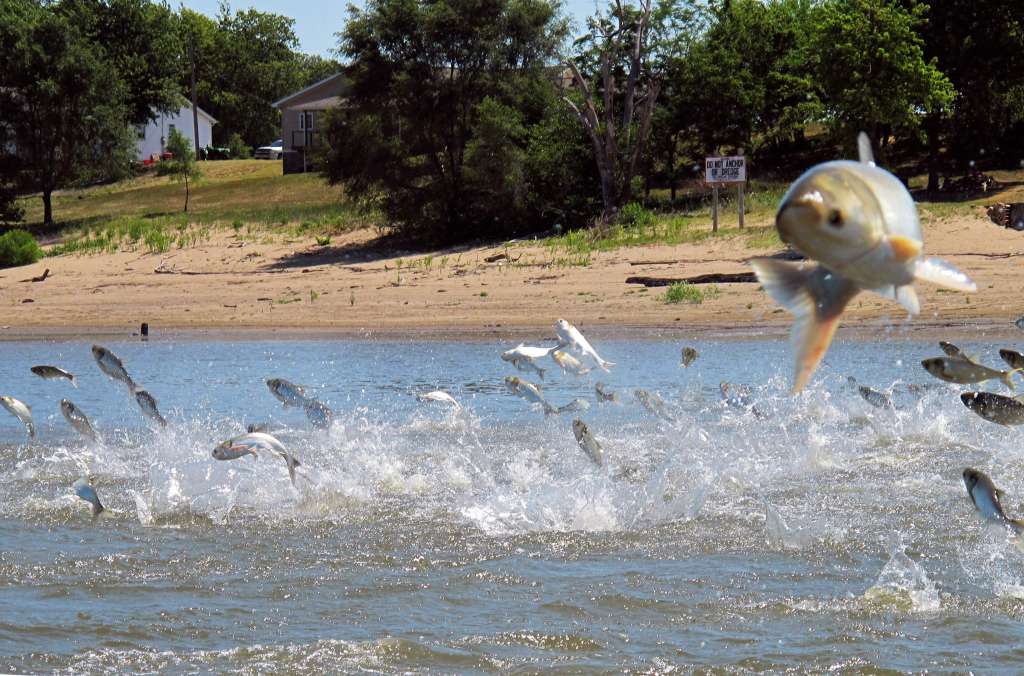 Invasive carp jump from the Illinois River near Havana, Illinois. Previously known as "Asian carp" a push has resulted in the name being changed to "Invasive" carp throughout the country. (AP Photo/John Flesher, File)

(CNN) — Throughout the country, the names of birds, moths, and geographical sites are being changed as Americans reconsider the outdated stereotypes and racist connotations some of these names may carry. The names of some varieties of fish are next.

Grass, bighead, silver and black carp have been commonly known as “Asian” carp since the 1970s, when they were brought to the US as a biological control for plants, algae and snails in certain circumstances, according to the Minnesota Department of Natural Resources.

But a few of those fish managed to escape those contained systems, and established themselves in the Mississippi River — eventually expanding into the Ohio, Missouri and Illinois rivers. These fish, considered invasive, can influence native aquatic communities, which is why agencies work to control their population.

Yet calling these invasive fishes “Asian,” and then promoting efforts to control their population, has xenophobic connotations, officials said.

“This could be referring to Asian people as being an invasive species, which is just a horrible connotation,” said Charlie Wooley, the regional director for the US Fish and Wildlife Service in the Midwest region, where these fish are often found.

That connotation was the furthest thing from their minds when using the term “Asian carp” previously, Wooley told CNN. Then, in the midst of the Covid-19 pandemic, anti-Asian hate crimes surged in 2020 and early 2021.

In January, President Joe Biden signed an executive order acknowledging the harm the Asian American and Pacific Islander community faced, while also encouraging the Department of Health and Human Services to exercise sensitivity toward those communities, according to a senior administration official.

Though Biden’s directive did not mention the carp issue at all, Wooley said, the move was a “driver” for the US Fish and Wildlife Service. Along with the increased attacks on Asian communities — notably the Atlanta shooting in March — there was pressure to act quickly.

“I looked at that and thought, ‘We need to start to get away from referring to Asian carp,'” he told CNN. “We felt we had a role here.”

After discussing the changes in February and March, the change from “Asian” to “invasive” carp became official on April 1 in the Midwest region, Wooley said, noting that everyone the service works with has followed their lead.

Locally, in Minnesota, the push to refer to these types of carp as “invasive” rather than “Asian” began years ago in 2014, when a group of state lawmakers introduced a bill to use the term “invasive carp” in proposed laws, rules or official documents. CNN reached out to Democratic state Sen. Foung Hawj, one of the authors of the bill, for comment, but did not immediately receive a response.

“The change is prompted by the need to pivot to a more culturally-sensitive terminology, incorporating an ecological description in lieu of a broad geographic reference,” the committee said in a statement to CNN. “Several US federal and state agencies have already transitioned to use the term ‘invasive carp’ when referring to black carp, grass carp, bighead carp, and silver carp. Over the next several months, the Committee will also transition its website and other public-facing communications to incorporate the term ‘invasive carp’ when referring to these carp species.”

It’s not just fish. Many other names in nature have recently been changed or reconsidered, as much of the US takes a harder look at what those names may signal.

The American Ornithological Society announced last month it would move forward on changing “harmful English bird names,” as some birds bear the names of racist explorers.

Meanwhile, a push is also being made to rename some geographical sites, many of which feature outdated or derogatory terms for Black people, Native Americans and Asian Americans.