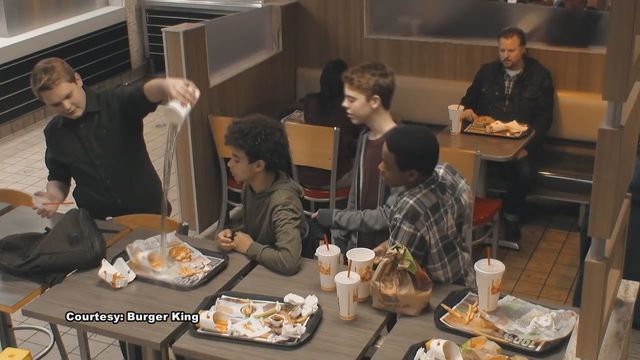 Their video shows what Burger King calls a social experiment they conducted in one of their restaurants.

The chain hired actors to act out bullying in front of actual customers, where several teens begin to bully another teen at their table.

Real customers look on as one of the teens dumps his drink onto the boy’s food. Most of the diners don’t get involved — that is, until their own meal is served.

Another actor portraying a cook in the kitchen is shown “bullying” a Whopper Jr., punching the sandwich until it looks visibly “beaten up” before serving it to customers.

When the diners go to the counter to complain about their destroyed sandwiches, a manager asks the cook if he bullied the Whopper Jr., who uses excuses such as “it’s just for laughs” and “we don’t mean anything by it.”

Similar excuses are often used with bullying, though the diners don’t seem to make the connection to the bullying they witnesses just minutes before with the group of teens.

Burger King says only 12 percent of the diners intervened with the teens to put a stop to the bullying, while 95 percent complained about their beaten-up burgers.

“The outcome was shocking, and unfortunately, not so shocking at the same time,” Burger King said of the result. “The Burger King brand is known for putting the crown on everyone’s head and allowing people to have it their way. Bullying is the exact opposite of that.”

The chain says the point of the video is to show that “no Jr. should be bullied.”

“The first step to putting an end to bullying is to take a stand against it,” said Nicholas Carlisle, the CEO and Founder of No Bully. “Our partnership with the BURGER KING® brand is an example of how brands can bring positive awareness to important issues. You have to start somewhere and they chose to start within.”