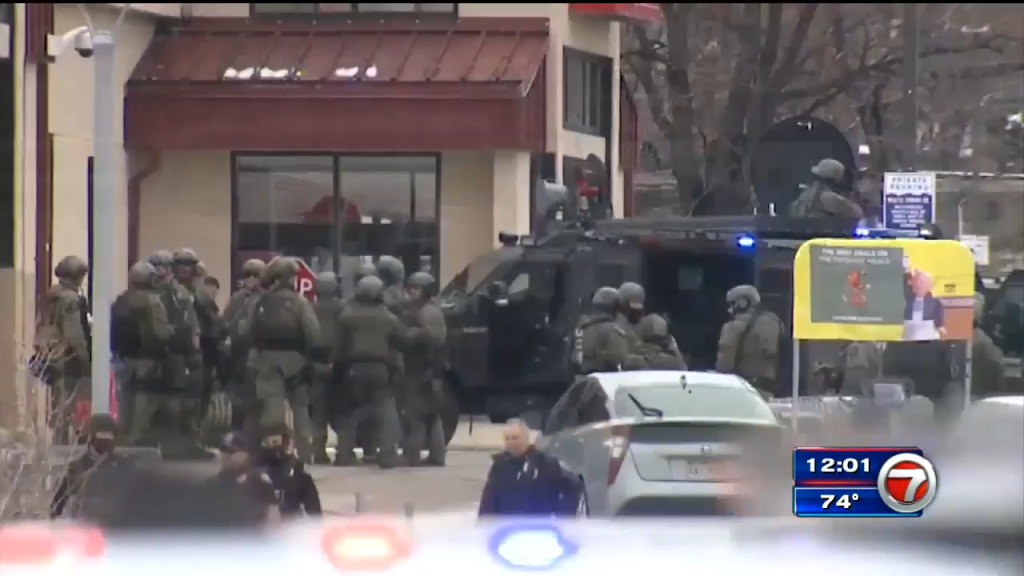 (CNN) — The Colorado police officer slain in Monday’s massacre at a Boulder grocery was the final person shot in the rampage that left 10 people dead, police said Friday.

And no one — other than that officer, Eric Talley — was shot after he and other officers started engaging the gunman at the King Soopers store after witnesses called 911, Boulder police said.

Boulder police made the comments on Twitter, responding to what it said were “comments from some in our community who questioned the response time of our officers.”

“We think it’s important to share that Officer Talley led a contact team of officers into the store within 30 seconds of arriving on scene,” the department’s tweet reads.

“The suspect then shot at officers, killing Officer Talley, and firing on officers until he was taken into custody. No other individuals were shot or killed after these brave officers engaged the suspect,” the department’s account reads.

The tweets do not address when the 911 calls started, and when police arrived at the store. Police previously said officers were dispatched around 2:40 p.m. Monday, and that officers arrived “within minutes.”

A gunman opened fire outside and inside the supermarket that afternoon, killing 10 people — including Talley, store workers and shoppers — as numerous others fled or hid.

A suspect, Ahmad Al Aliwi Alissa, 21, of the Denver suburb of Arvada, was arrested in the store that afternoon — with a gunshot wound to the leg — following a gunfire exchange with police, authorities said.

Alissa has been charged with 10 counts of murder in the first degree and one charge of attempted murder. The attempted murder charge alleges Alissa shot at a separate police officer, according to court documents.

The county district attorney has said in the “next couple of weeks” he anticipates filing more charges of attempted murder, stemming from accusations Alissa fired at other officers.

Police have said they’re still trying to determine a motive in the shooting.

Alissa passed a background check before purchasing the weapon used in the slaughter, a Colorado gun shop owner said Friday.

Alissa used a Ruger AR-556 in the shootings, and he bought it on March 16, days before the massacre, a senior law enforcement source previously told CNN on condition of anonymity.

“We are absolutely shocked by what happened and our hearts are broken for the victims and families that are left behind,” John Mark Eagleton, the owner of Eagles Nest Armory in Arvada, said in a statement.

The gun shop will continue to fully cooperate” with investigators, Eagleton said.

“Ensuring every sale that occurs at our shop is lawful, has always been and will always remain the highest priority for our business,” the statement said.

“Regarding the firearm in question, a background check of the purchaser was conducted as required by Colorado law and approval for the sale was provided by the Colorado Bureau of Investigation.”

Nothing in the federal system would have prevented Alissa from passing a background check and buying a firearm, a law enforcement source had previously told CNN.

The suspect pleaded guilty to a misdemeanor count of third-degree assault in 2018 after attacking a high school classmate one year earlier, according to court documents and a police report. He was sentenced to one year probation, 48 hours of community service and anger response treatment, court documents said.

‘Why that King Soopers? Why Boulder? Why Monday?’

“I think the victims’ families and the community are desperate to know the motive,” he told reporters. “We want to know the motive. And that’s going to be the focus of our efforts going forward. Whether or not we’re able to determine it remains to be seen.”

Boulder Police Chief Maris Herold said: “Why that King Soopers? Why Boulder? Why Monday? Unfortunately, at this time, we still don’t have those answers.”

In Alissa’s first court appearance Thursday, one of his defense attorneys asked a judge to delay the next hearing for weeks because the defense needs time to assess what she called her client’s mental illness.

The attorney did not elaborate. However, investigators have been examining possible mental health questions in the case, a law enforcement official briefed on the investigation previously told CNN on condition of anonymity.

Alissa’s brother also told CNN earlier this week that Alissa may have been suffering from mental illness.

The presiding judge, Thomas F. Mulvahill, agreed to set the next hearing in “about 60 to 90 days.”

Alissa has been moved out of county jail after officers became aware of “threats toward him” from other inmates, a jail official told CNN.

He was relocated early Wednesday, according to Jeff Goetz, Division Chief of the Boulder County Jail.

Alissa was never in direct contact with the inmates and was not harmed, but other inmates were asking about him and making threats, according to Goetz. These questions were directed toward other officers.