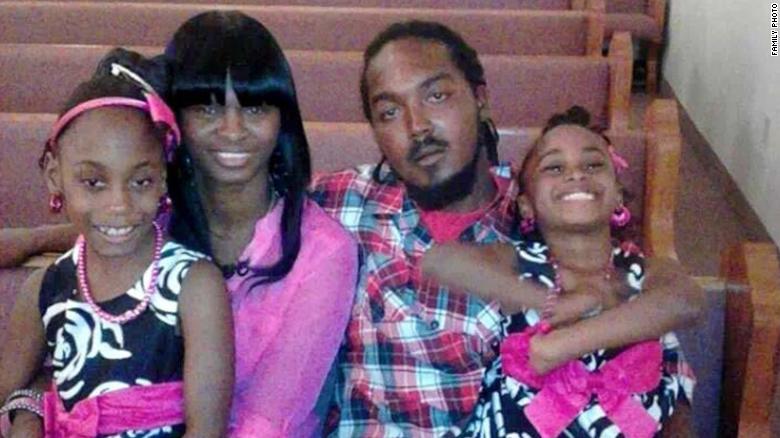 (CNN) — A Florida family is “heartbroken” after a jury awarded $4 in damages for funeral expenses and pain and suffering in a case in which a St. Lucie County deputy fatally shot a father of three through his garage door, the family’s attorney said Thursday.

Deputy Christopher Newman killed Gregory Hill Jr., 30, in 2014 after a mother picking up her child at a school across the street called in a noise complaint.

Newman and another deputy responded to Hill’s home, Hill partially opened the garage door, closed it and Newman fired four times, hitting Hill three times, including once in the head, according to court and police records.

No charges were filed against Newman, who said he shot Hill because he brandished a handgun. Hill’s mother, Viola Bryant, filed a lawsuit against Newman and Sheriff Ken Mascara, alleging wrongful death, negligence, excessive force and violations of Hill’s 14th and 15th Amendment rights.

Bryant also accused a SWAT team that responded to the scene of firing so much tear gas and causing so much damage to Hill’s one-story home that no one can live in it now.

After 10 hours of deliberation last week, a jury found that Newman was not liable in Hill’s death and that Mascara was 1% liable. Hill was 99% responsible for his own death, the jury ruled, according to court documents.

In deciding damages in the case, the jury awarded Bryant $1 for funeral expenses, and $1 for each child’s “loss of parental companionship, instruction, and guidance and … mental pain and suffering,” verdict forms show. Hill’s children are 7, 10 and 13.

Mascara applauded the verdict, saying, “Newman was placed in a very difficult situation and like so many fellow law enforcement officers must do every day, he made the best decision he could for the safety of his partner, himself and the public given the circumstances he faced.”

Attorney John Phillips, who represents Hill’s family, called the ruling “perplexing” and questioned why the jury would award $1 for $11,000 in funeral expenses and another dollar for each child’s suffering when it could have simply awarded no damages.

The jury consisted of one black man, two white men and five white women, he said.

“That a black child’s pain is only worth a dollar is exactly the problem with the plight of the African-American right now. This says, black lives don’t matter,” he said.

Phillips plans to file a motion for a new trial in US District Court, and if that’s denied, he will take it to the US 11th Circuit Court of Appeals.

On January 14, 2014, around 3 p.m., a mother picking up her child at Frances K. Sweet Elementary School heard loud music blaring from Hill’s home.

Testimony showed Hill was playing Drake’s “All Me,” a song rife with F-bombs and N-words. The mother took offense and called police.

City law prohibits “unnecessary noise” and provides that offenders get a warning on the first offense in 24 hours and a citation on the second. A third complaint may result in a misdemeanor charge. This was Hill’s first.

“After Newman knocked on the doors, the garage door opened revealing Hill within the comfort of his own garage and home,” the lawsuit alleged. “Upon information and belief, Deputy Lopez indicated loudly that Hill had a gun and then the garage door closed. Despite the door being closed, Newman fired his handgun approximately four times and killed Hill.”

Read the lawsuit for yourself

The bullet from the first shot got stuck in the door, Phillips said. The second and third hit Hill in the abdomen, and the fourth struck Hill’s head, he said. Lopez did not open fire.

Not realizing Hill was dead, the deputies called for a SWAT team and snipers, according to the lawsuit. They kicked in doors and cut holes in the garage door, the suit claimed.

“Deputies shot tear gas canisters into the Hill home through many windows while severely damaging the windows and interior of the home and leaving toxic tear gas residue in the home,” the lawsuit said.

Once inside, officers found Hill dead with an unloaded handgun in his back pocket, not his hand, court records show. Toxicology would later show Hill was intoxicated, to the point he could not legally drive.

Thirty witnesses were called during the trial, Phillips said, some of whom contested Newman’s narrative that he saw a gun and that he demanded Hill drop the weapon before opening fire.

Among those was Hill’s oldest child, 13-year-old Destiny, who was 9 at the time. She sat on a bench at the school across the street as the encounter unfolded. She testified that her dad’s hands were empty, according to court records.

Phillips said he has numerous problems with the court proceedings, which will help form the basis of his appeal.

One is what he called the “evasiveness” of a police expert, who, despite answering defense questions, claimed to be hard of hearing when Phillips questioned him, the lawyer said. Phillips also alleged deputies changed their story about how Hill was holding the gun and whether he aimed it at Lopez, the other deputy.

He also said there was no blood spatter on the gun, which seems to back the family’s claim that the weapon remained in Hill’s pocket the whole time.

There were issues regarding timing as well, the attorney said. It was determined that Newman fired all four shots in less than 1.2 seconds, and an expert said the final shot to Hill’s head would have immediately disabled his motor capabilities. This raises the question in Phillips’ mind: How did Hill get the gun in his back pocket after he was shot?

Another factor prompting the attorney to seek a new trial is that the defense mentioned Hill was on probation for drug possession, which Phillips feels was meant to vilify Hill, as Newman had no way of knowing this when he responded. Hill’s probation was also set to “automatically terminate” 11 days before his shooting, he said.

Phillips has handled many high-profile cases, most notably the Jordan Davis “loud music” trial in Jacksonville, and said he has rarely been left so disturbed by a jury’s findings. He said he will be filing his motion for a new trial in the same federal court in coming weeks.

“This one’ll haunt me for a long time if we can’t get it reversed,” he said.