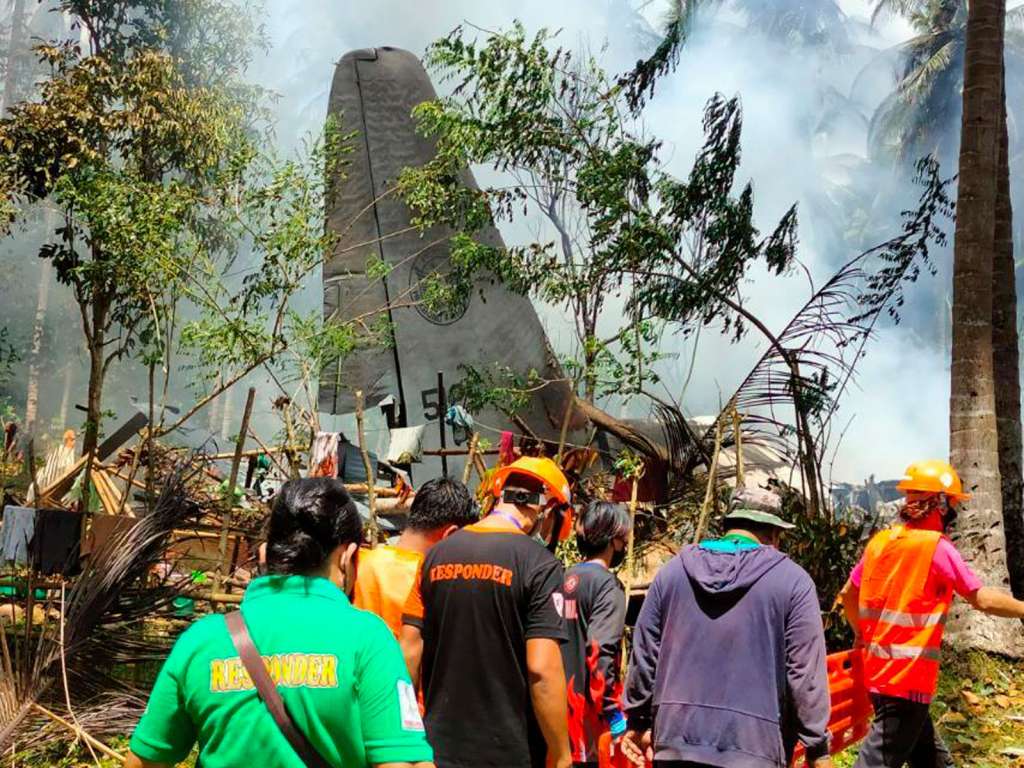 Rescuers search for bodies at the site where the plane crashed. (Joint Task Force-Sulu via AP)

(CNN) — At least 45 people have died after a Philippine Air Force plane crashed in the southern Philippines on Sunday, as rescue and recovery operations continue amid the country’s worst military air disaster in decades.

The plane, which was carrying more than 90 military personnel and crew, crashed into nearby Patikul village at 11:30 a.m. local time on Sunday (11:30 p.m. ET).

“Minutes after the crash, troops and civilian volunteers rushed to the site for search and rescue. Per eyewitnesses, a number of soldiers were seen jumping out of the aircraft before it hit the ground sparing them from the explosion caused by the crash,” according to a press release by Joint Task Force Sulu.

Images from a local TV station appeared to show the burning wreck of the plane and thick smoke billowing from the village. A large plume of smoke is seen in images of the crash rising up through the palms to the blue sky.

At least 50 people were hospitalized after the crash, with some being evacuated to the city of “Zamboanga to undergo further treatment,” according to the statement by the Joint Task Force Sulu.

Five military personnel who were on board the plane are still missing, the army said.

Joint Task Force Sulu Commander William N Gonzales said the personnel traveling on the plane “were supposed to report to their battalions today. They were supposed to join us in our fight against terrorism.”

The Philippines Air Force told CNN in a statement that the plane was carrying 96 people, many of whom were army personnel reporting for duty.

Military and civilian firefighters have been deployed to put out the fire and rescue operations are focused on pulling survivors from the crash site, according to CNN Philippines.

This is the country’s worst military air disaster in around 30 years, Reuters reported. In 1993, a Philippines Air Force C-130 crashed, killing 30 people.

The Lockheed Martin C-130 aircraft had recently arrived in the Philippines. It was one of two aircraft granted by the U.S. government’s military financing program, according to a US government website announcement in February.

Sunday’s crash comes weeks after a newly acquired S-70i Black Hawk utility helicopter crashed during a night flight about 60 miles north of the capital Manila. All six people on board died, according to CNN Philippines.

It was one of a number of new combat utility helicopters bought by the armed forces in its bid to modernize its fleet, according to a Philippines government website.

The military personnel were supposed to bolster the battalions fighting against Abu Sayyaf, a Filipino jihadi group based in Sulu that has been involved in bomb attacks and piracy for decades. The group proclaimed allegiance to ISIS in 2014.