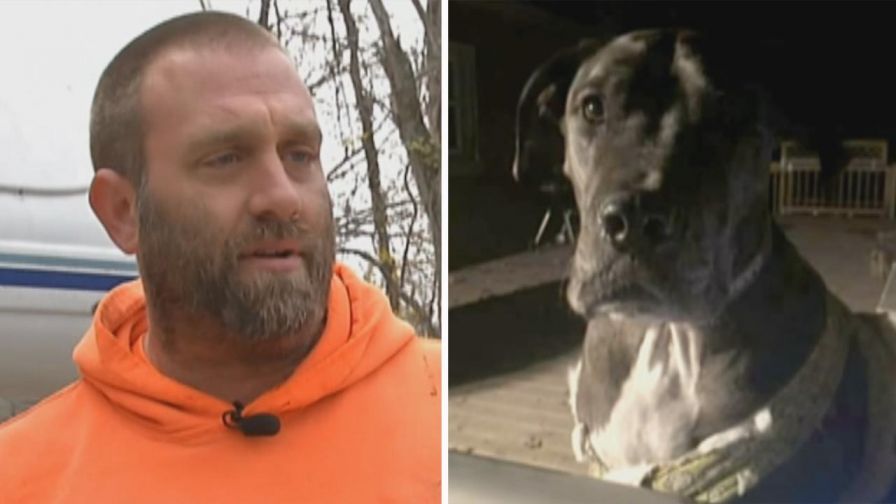 (WSVN) - A Kentucky homeowner says he managed to stop a would-be burglar outside his home with the help of his gun and 150-pound dog.

The outside of Derek Thomas’ home even sports a warning sign with an image of a gun, which says, “Nevermind the dog, beware of the owner.” That apparently didn’t scare away one man, who lurked outside of the home Saturday night. Fox News reports that Thomas was watching a football game in his house when he spotted a shadow outside of his Louisville home, which sits on a 10-acre property.

With his wife and three young children already asleep, Thomas said he grabbed his gun and went outside to confront the man, who had broken into his truck.

“As I pulled my gun on him, I said, ‘What the hell are you doing in my truck? Get out of my truck!’ and he crawled back out and basically tried to crawl around the back,” Thomas told WDRB. “He did stand up, but when I shot the gun two times, he went back to the ground and stayed good.”

With the man on the ground after he fired the two shots in the air, Thomas told his wife to call 911. While waiting for police to arrive, Thomas brought out an extra measure of protection: the family’s Great Dane, appropriately-named Tank.

“He started barking and going crazy,” Thomas said. “I said, ‘You hear that? That’s my 150-pound dog, and I’m not chasing you, but if you run he’s going to catch you.’”

Police arrested the man, identified as 25-year-old Matthew Conklin, and said they found capped needles, heroin, and a small bag of what appeared to be meth in Conklin’s pockets.

Conklin faces both drug trafficking and trespassing charges, and pleaded not guilty.

For his part, Thomas says he’s glad he managed to stop the would-be thief from taking anything.

“I work hard for my money, and it makes me upset someone was out here in my stuff, stealing my stuff,” he said.