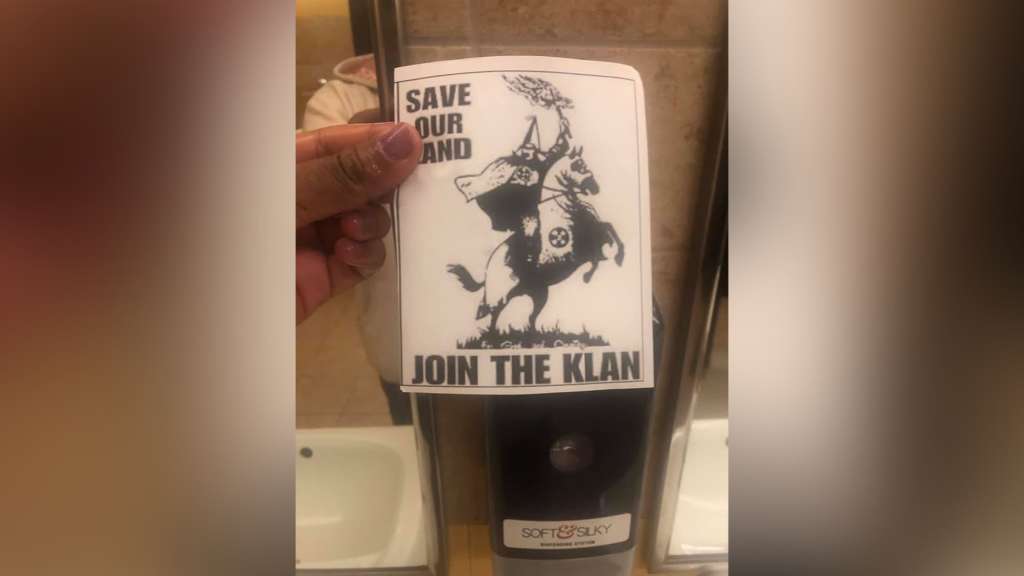 School authorities in San Antonio have launched an investigation after a student found what appeared to be a Ku Klux Klan flyer in a bathroom.
CNN

(CNN) — School authorities in San Antonio have launched an investigation after a student found what appeared to be a Ku Klux Klan flyer in a bathroom.

The student found the flyer on Tuesday wedged between a soap dispenser and the wall in a bathroom at East Central High School in San Antonio, Texas. He sent a photo to his mother, who posted the image to social media.

That’s how the school found out, Brandon Oliver, director of marketing and communications for East Central Independent School District, told CNN. The principal reached out to the mother that night, and the school opened an investigation the following day working with the East Central Police Department and federal agencies like the FBI.

A staff member then found a second identical flyer, also in a boys’ bathroom.

The flyers depict a hooded figure dressed in KKK garb, holding a torch above his head while riding a horse and wearing KKK robes. It reads, “Save our land” at the top, with, “Join the Klan” across the bottom.

The perpetrator has so far not been identified, but Oliver said the school is making it a priority to catch and “punish the individual.”

CNN reached out to East Central Police Department, but the department was unable to comment about the ongoing investigation.

The FBI said there is no federal crime in this case, as of now.

“If in the course of the local inquiry, information comes to light of a potential federal violation, the FBI is prepared to investigate,” FBI Special Agent Michelle Lee, a spokeswoman for the bureau’s San Antonio office, said in an email to CNN. “However, no matter how offensive a viewpoint may be, expressing certain beliefs in and of themselves is not a crime and the FBI can never open an investigation based solely on constitutionally protected activity.”

Only two flyers have been discovered so far, Oliver said, and that they do not seem to be getting distributed on campus.

“It has been completely isolated,” he said.

Nyisha Jackson, the mother of the student who found the flyer, spoke to a local outlet about the incident.

She said she was outraged when she found out.

“I was like, ‘You got to be kidding me,'” she said. “Even if it’s a joke, it’s very scary with all that’s going on right now, and I just want to raise awareness that this is not OK. And you don’t want to fear for your child to have to go to school and deal with this.”

East Central is a majority Hispanic school, with 16% white students and 9% black students, according to demographic data received by CNN from Oliver.