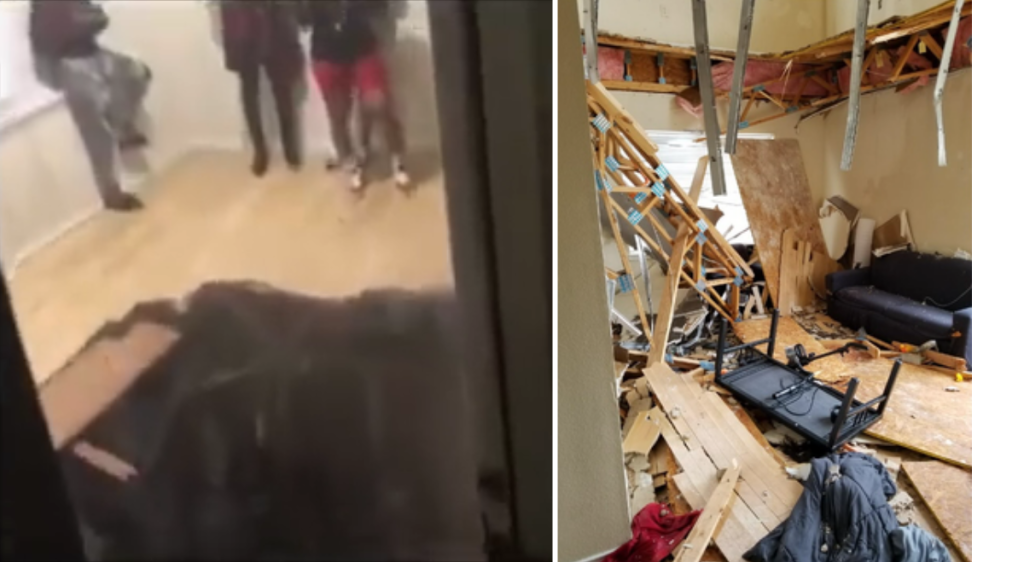 DENTON, Texas (WSVN) — A party came to an abrupt end Sunday morning in Texas after the floor full of party-goers collapsed underneath them into the apartment below.

Fox 4 reports the gathering was full of students from the University of North Texas who were dancing late into the evening. Police estimated about 100 people were packed into the third-floor unit.

Only minor injuries were reported, as cell phone videos show water spewing from broken pipes while people climb over beams and plywood to escape.

Apartment floor collapses into unit below during massive party

About 100 partygoers packed into the apartment, jumping up and down to the music, when the floor collapsed underneath their feet. The residents in the unit below likely would've been killed had they not left minutes before to make a noise complaint to police.STORY: http://bit.ly/2jom1fa(Video courtesy: @Waavvyg on Twitter)

The residents in the apartment below had just left minutes before, in order to make a noise complaint about the party with the Denton Police Department.

“If we were in our living room, we wouldn’t have made it out because by what we’ve seen, it’s just completely gone,” said sophomore Carley Carroll, whose apartment was destroyed by the party above it.

Carroll says it isn’t the first time she’s called the cops on the apartment above.

“We’ve called and said, ‘It looks like the ceiling is going to cave in,’ so I feel like with us saying that, there could’ve been more that was done,” Carroll told Fox 4.

Carroll and her three roommates say they have nowhere to go, and are displaced along with fifty other residents.

Denton Police say they are working to confirm the previous noise complaints, but said those kinds of calls are low priority and people have usually left the party by the time police arrive.

An investigation into the structural failing is now underway, while apartment management and the university have worked to help secure housing in dorms or hotels for affected students in the building.