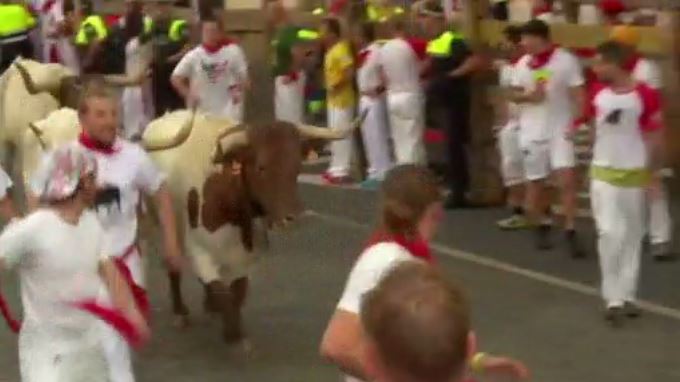 BARCELONA, Spain (AP) — One of the two Americans gored Saturday during this year’s second running of the bulls in the Spanish city of Pamplona is swearing that he will run again before the festival is over.

Bill Hillmann, a 35-year-old writer who also was gored three years ago at the San Fermin festival, was in stable condition. The bull that led the pack thrust its horn into Hillmann’s buttocks before flipping him onto the street.

“In a split second he was on me. I tried to jump, but he hit me in the butt,” the Chicago resident told The Associated Press by telephone from a hospital in Pamplona.

“I flew up in the air and landed on my back. I didn’t know I was gored at first,” he said. “Then people started telling me I was gored and pulled me over to the medics. I pulled down my pants and there was blood.”

Despite his run-in, Hillmann says his love for the chaotic and treacherous spectacle of Pamplona’s rampaging bulls hasn’t wavered.

“I am probably going to run tomorrow or the next day, sure at this festival,” he said. “I am already walking. The first time, I wasn’t walking for a week.”

Hillmann’s wound was less severe than those of a 22-year-old American who also was gored on Saturday. Identified by the regional government of Navarra only with the initials J.C., he was in serious condition after his left arm was impaled and he was dragged for several meters (yards) before the bull flung him off and stormed over him. WBBM Chicago identified him as Jack Capra, of California, who told the station it had been his first running with bulls.

Three other Americans, two Frenchmen and three Spaniards — all men — needed hospital treatment for injures received during Saturday’s frantic and crowded run of thrill-seekers. Two Americans and a Spaniard also were gored on Friday.

Hillmann was in Pamplona for a 12th consecutive year to brave the bulls and ran on Friday.

He was gored in the early stages of the run, when the bulls from the ranch of Jose Escolar confirmed their reputation as being unpredictable.

The bulls completed the 930-yard (850-meter) cobbled-street course in just over four minutes — well over the average of three minutes — because one bull broke away from the rest and turned around.

The other five plowed into the slower-moving crowds, knocking many runners down as they maneuvered through the narrow streets and wooden barricades.

Hillmann described this second goring as “just a tick” compared to his first one in 2014, which produced two thigh wounds he called “traumatic.”

“It changed my life. It made me want to be a writer, to run the bulls, to come to Spain,” he said. “When I got here everything in the book was still here, but a thousand times more. And it just keeps getting more interesting. People think this is just crazy people running. There is real art. If you pay attention, you can see it.”

Hillmann claims to have participated in over 300 bull runs across Spain at traditional summer festivals. He has written a guide on bull running, along with a novel, and was back in Pamplona to make a documentary featuring him as a bull runner.

“The thing is that when you run, you always have doubts because you are taking a decision that can end your life,” he said. “There is a shadow that follows you. Sometimes I don’t run because I don’t feel right. I usually get premonitions. Not today. I felt good today, but it didn’t go my way.”