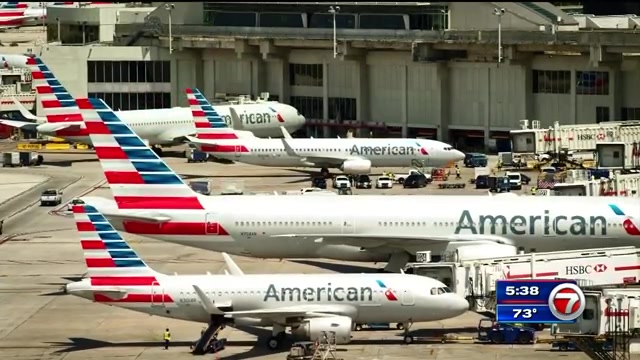 (CNN) — American Airlines is giving flight attendants who work during the holidays a one-time holiday pay premium, the company announced in an internal memo. The increased holiday pay comes after an operational meltdown during Halloween weekend, which forced the airline to cancel thousands of flights partly due to staffing shortages.

Flight attendants who work between Nov. 23 to Nov. 29 and Dec. 22 to Jan 2. will receive a 150% premium, according to an internal memo viewed by CNN. Those with no absences between Nov. 15 to Jan. 2 will receive an even higher premium of 300% for the hours they work during the peak holiday period.

“On the schedule front, we’ve ensured that November and December are built to meet customer demand and that they are fully supportable by our staffing,” COO David Seymour said in an internal staff note viewed by CNN.

American furloughed 8,000 flight attendants during the pandemic, when it anticipated federal aid for airline workers expiring.

“From pandemic-related changes to the way we must do business (including mask and other travel requirements) to the small minority of customers who cause disturbances, the last 20 months have been incredibly challenging for many personally and professionally,” Seymour said.

American blamed last week’s operational meltdown on bad weather in its Dallas-Fort Worth hub and a shortage of pilots and flight attendants.

Airline unions say staff are at a breaking point. Many pilots and flight attendants report that they’re having trouble getting the hotel rooms they need to have the government-mandated rest they need while working. CNN has reached out to the Association of Professional Flight Attendants for comment.

Pilots at American planned to hold informational picketing at the airline’s hubs in recent weeks to complain about their work conditions, and Southwest Airlines pilots are planning their own job actions this month. Airline unions say they’re worried that the problems will get worse with the expected pick-up in travel over the holidays.

“We want that flying to get done, but we don’t want tickets sold that can’t be fulfilled,” said Capt. Dennis Tajer, an American Airlines pilot and spokesman for the Allied Pilots Association, in an interview last month about the holiday season. “Are they biting off more they can chew?”

There are also concerns about federal vaccine rules, which American said it will comply with. Some industry analysts believe complying with those rules will mean a large number of airline employees will be unable to work during the holiday period, or might quit their jobs rather than comply.

And once flight attendants are on the plane, they run the risk of encountering unruly passengers. Airlines have reported a record number of violent clashes between flight attendants and passengers in 2021. A survey by the Association of Flight Attendants, which represents 50,000 employees at 17 airlines, found that 85% of respondents said they have dealt with unruly passengers as airline traffic picked up in the first half of 2021. And 58% said they experienced at least five incidents, with 17% experiencing a physical fight.

In October, a passenger punched an American Airlines flight attendant in the face, breaking her nose. A California man was charged in the incident described by the airline’s CEO as “one of the worst displays of unruly behavior we’ve ever witnessed.”