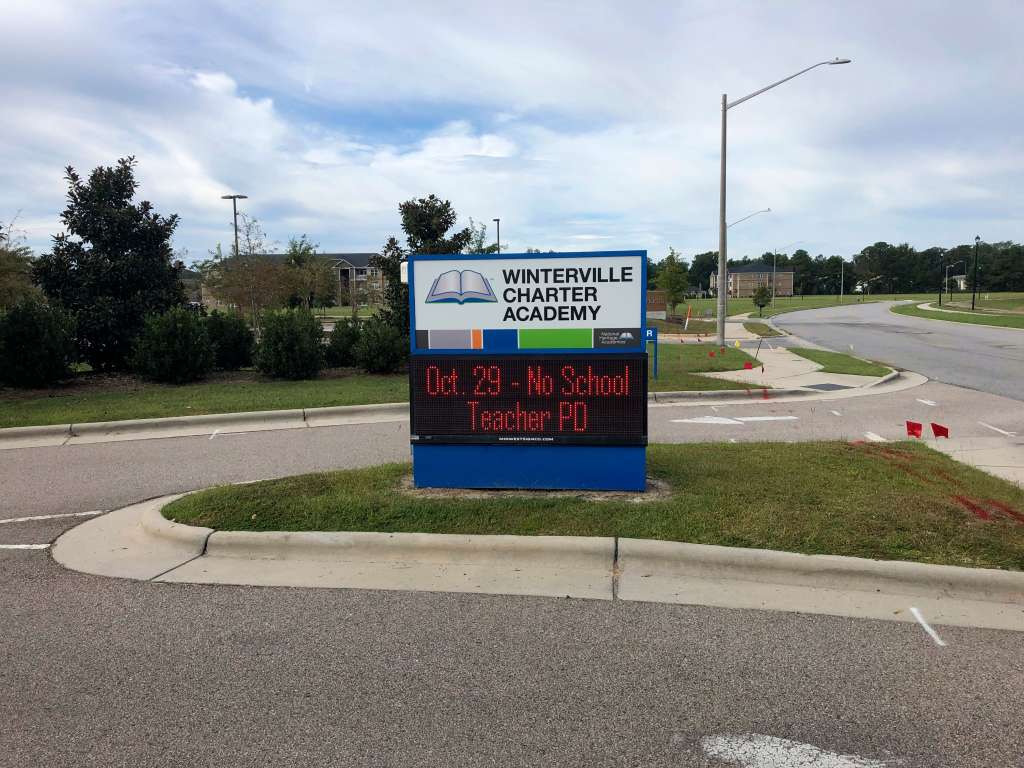 This Wednesday, Oct. 6, 2021 photo shows a sign at the Winterville Charter Academy in Winterville, N.C. A teacher has resigned from a North Carolina charter school after telling Black students in her class that if not for the Constitution, they would be her “field slaves,” a comment that one parent said brought attention to other racist incidents at the school. That teacher, according to the memo from principal Annastasia Ryan, “was supported in turning in her resignation and will not be returning on campus,” WITN-TV reported. (Justin Lundy/WITN-TV via AP)

(CNN) — A teacher at a North Carolina charter school has resigned after parents brought to light a number of alleged racist incidents, including a “racially insensitive lesson” to Black students in September, the school said.

In an eighth-grade class at Winterville Charter Academy during a lesson regarding the importance of the US Constitution, parents claim the teacher allegedly asked Black students to stand up, telling them that if it wasn’t for the Constitution, they would be her “field slaves.”

The school said it acted immediately and is working to address ongoing concerns from parents.

“Clearly, we know that’s not how the history works,” Kanisha Tillman, whose eighth-grader was in the class, told CNN. “But what upset me even more — not only is she teaching history and the Constitution wrong — but the fact that she personalized it and made our students stand up, raise their hand, separate themselves from the rest of the class, and say that they would be working for her in the field as slaves.”

The lesson was carried out during an English lesson on Constitution Day on September 17, the school said. Eighth-grade parents at the school received a memo from principal Annastasia Ryan on September 24, noting that the English Language Arts teacher involved, who has not been identified, “was supported in turning in her resignation” and would not be returning on campus.

Culturally sensitive training would be provided for the teacher that had resigned, along with “proactive training measures” for Winterville Charter Academy’s current and future staff members, the memo said.

“It was also reported that two racially insensitive words were used by multiple children in the classroom without appropriate redirection along with inappropriate response from the educator,” the memo added, noting that the children involved in the incident had been disciplined.

Tillman told CNN that Winterville Charter Academy parents began to discuss the racist incidents on a parent Facebook page, which is not run by the school itself.

“These situations concern us, too. Our school culture is built on one of acceptance, love, and respect to serve all children and their families. The inner workings of our school are surrounded by intentional effort to eliminate implicit and explicit bias,” Ryan said.

Tillman told CNN parents had hoped to address the ongoing issues with Ryan at an October 6 pre-scheduled event at the school called “Coffee with the Principal,” which had been scheduled weeks in advance, but that the event was canceled.

“While student and staff privacy rights prevent me from sharing specific details, what I can share is that we will not tolerate racism in our school community and will continue taking swift action that addresses these issues.”

The school serves 661 students in kindergarten through eighth grade, with Black or African American students accounting for 61% of the student body, according to the school’s website.