A substitute teacher living in his car got a birthday surprise of $27,000 from a former student 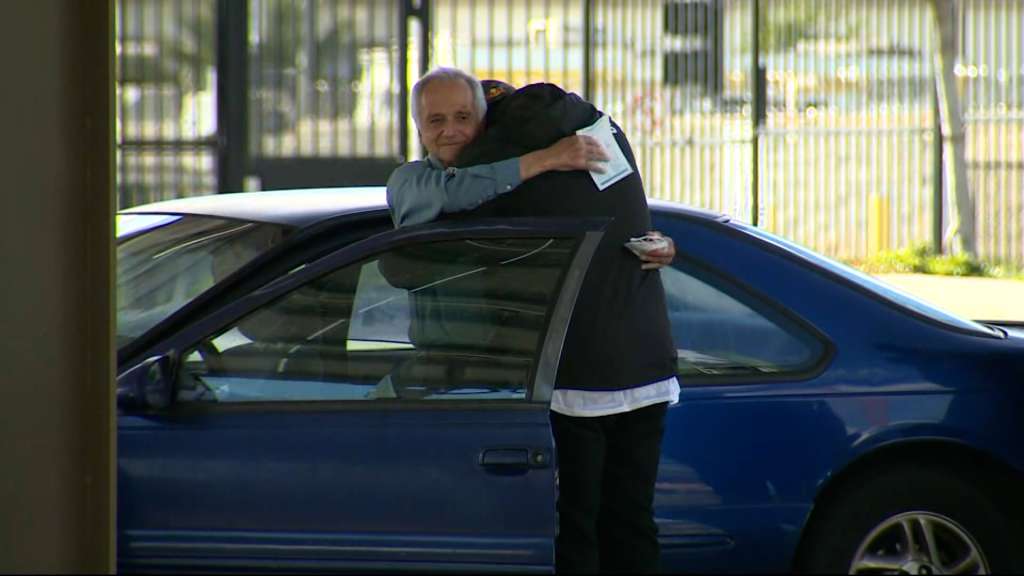 (CNN) — Seeing a beloved substitute teacher living in his car inspired a former student to step up and help a man who had made a difference in his life.

The help came in the form of a check for $27,000, money that former student Steven Nava helped raise through a GoFundMe campaign last week. It was money that the former substitute teacher, Jose Villarruel from Fontana, California, said he never expected.

“From the bottom of my heart, I just had to resort to all of my self-control not to become sentimental about the whole thing and not to become nervous,” Villarruel told CNN. “It was extremely exciting, totally unexpected and great.”

Mr. V, as his students call him, turned 77 on March 11. Nava, 21, presented the check to Mr. V on his birthday, at a surprise party with other former students who came to celebrate.

The celebration and the gift came during a time that Villarruel had been struggling. Villarruel has lived in his car for the past eight years, all while working as a substitute teacher for Los Angeles Unified School District.

When the pandemic started and classes went to remote learning, the need for substitute teachers went away, he said. Villarruel applied to get his retirement funds so he could have some income.

He made the decision years ago to live in his car because he was sending most of his income to his wife, children and extended family in Mexico, he said.

Early this month, Nava was getting ready for his job as a welder and heading to work around 5 a.m. He noticed a man in the parking lot of the nearby senior center going through the trunk of his car.

Nava said he thought it was strange and he kept glancing at the man, thinking he looked familiar.

“Throughout the day, I was just thinking, ‘Wait, wait, wait, I think that’s my substitute teacher,'” he said, eventually realizing it was Mr. V, who taught him at Fontana High School.

Nava said he had always remembered Villarruel. “He really stuck to me just because of the way he was so nice around his students. He’d ask how your day would go, did you eat, just small little details like that. He’d be really, really funny when he took attendance.”

It took him a few days to work up the courage, but Nava returned to the parking lot and found Villarruel again. He asked him about his day and what his situation was, he said.

When Nava learned how Villarruel had been living, he insisted on giving his former teacher the money he had on him, which happened to be $300.

“He gave me this big old smile and said, ‘Thank you so much,'” Nava said. “He came over to give me a hug and as he was hugging me, I saw a little tear run down his face.”

It was then that Nava told him, “I’m going to get you out of this situation, one way or another. I’m going to find a way,” he said.

That day, Nava created the GoFundMe campaign for Mr. V, which earned $5,000 in a matter of hours, he said. The next day, a TikTok video he made about Villarruel, which has now been viewed 1.7 million times, helped bring the donations up to $27,000.

“Teachers play a huge part in our lives,” Nava said. “I felt like I needed to repay the favor.”

Seeing all of the former students come to Mr. V’s surprise party showed how much the teacher has done for the community. The outpouring also motivated Nava to do better for his community.

“You’re sort of just baffled when you find out that one of your teachers is just homeless,” Nava said. “Seeing him living and going through that struggle pretty much made me want to do this. He helped us with our futures and being the person we are today, so I wanted to help him and make sure he’s in a situation where he doesn’t have to worry anymore.”

Nava and Villarruel are now in touch daily and Nava said he’s enjoyed their conversations and helping his teacher get back on his feet.

The San Bernardino County Sheriffs Department heard about Villarruel and assisted him in getting a motel voucher on March 10, said Mike Jones, deputy sheriff of Homeless Outreach and Proactive Enforcement (HOPE) with the county.

This will give Villarruel a place to stay for a month while longer-term housing is arranged, he said.

“Our team works collaboratively across the county with service providers and county agencies to help people like Mr Villarruel on a daily basis,” Jones said in the statement. “It’s these efforts that help the most vulnerable population of our community move beyond homeless.”

For Villarruel, he’s trying to come to terms with his new reality and plans to take an extended trip to Mexico so he can see his family.

“It’s a great feeling to have this change and I still have to adapt to it so I can make the best of it,” Villarruel said. “It was unexpected but I accept it with an open heart and I’m ready for whatever comes next. I know good things will come.”