A Starbucks barista received nearly $80,000 in tips after being singled out for refusing to serve a customer not wearing a mask 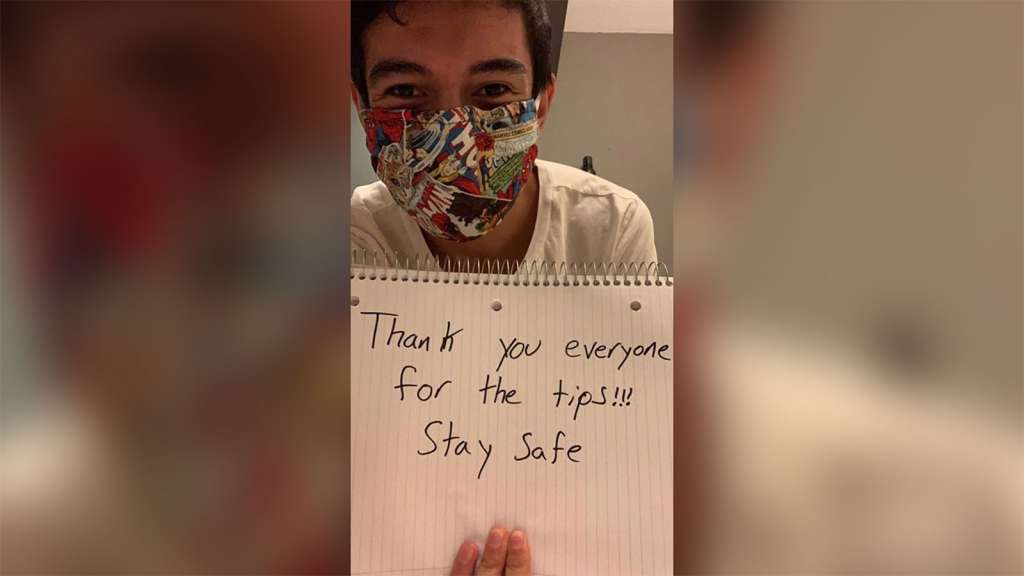 (CNN) — A Starbucks barista who was publicly shamed by a customer after asking her to wear a face mask has received nearly $80,000 in virtual tips after a Facebook post that criticized him went viral.

Lenin Gutierrez, 24, was working his usual shift at a San Diego Starbucks on a Monday morning when a woman — who was not wearing a mask — walked in and attempted to place an order, he told CNN.

Gutierrez asked her if she had a face mask — but before he was even able to show her company guidelines requiring customers to wear one, the woman flipped him off and “started cursing up a storm,” he said.

Then the customer, Amber Lynn Gilles, took a photo of him.

“Meet Lenen from Starbucks who refused to serve me cause I’m not wearing a mask. Next time I will wait for cops and bring a medical exemption,” Gilles wrote in her post, which was accompanied by a photo of Gutierrez wearing a face mask and looking at the camera.

Gilles did not immediately respond to CNN’s request for comment.

Rather than generate more backlash toward Gutierrez, Gilles’ Facebook post actually led to an outpouring of support for the barista.

“When I realized who it was I just thought ‘wow, she really blasted me on Facebook,'” Gutierrez told CNN. “I started reading the comments and just laughed at the memes people created about this ‘encounter in the wild.”‘

A kind gesture that would change his life

Many people voiced their support for Gutierrez in comments on Gilles’ post, with some saying they wish they could visit the coffee shop to give him a special tip.

The 26-year-old, who doesn’t know Gutierrez personally, said he was upset that the barista was “being bullied for doing the right thing.”

So he decided to start a GoFundMe, which he named “Tips for Lenin Standing Up To A San Diego Karen,” to give everyone who wanted to tip Gutierrez a chance to do so virtually.

“People aren’t asking you to do a lot, they’re asking you to wear a mask for your safety and the safety of others,” Cowan told CNN. “Starbucks has also set up other ways to get coffee if you aren’t comfortable wearing a mask.”

“I thought it was heartwarming to see Matt created a GoFundMe for me, even though we didn’t know each other,” Gutierrez said.

“I felt baffled and honored to receive so much support and love when it was at $1,000. The fact that now it went over $65,000, I don’t know how to truly vocalize how grateful and blessed I feel with this opportunity everyone has given me.”

Gutierrez said he plans to use some of the GoFundMe money to pursue his dreams of becoming a dancer. He also wants to donate to some organizations in the San Diego community.

As Covid-19 cases continue to increase across the United States, the debate on whether people should be required to wear masks in public continues.

The California Department of Public Health (CDPH) reported a single day increase of 5,972 positive cases of coronavirus, with 60 deaths from Friday to Saturday, according to an update released Saturday morning.

The Centers for Disease Control and Prevention recommends that everyone “should wear a cloth face cover when they have to go out in public” to reduce transmission and slow the spread of the coronavirus, which is highly contagious.

A recent study released in early June found that coronavirus spreads mainly via airborne transmission, and wearing a mask is the most effective way to stop person-to person spread.

But some argue that the act of wearing a mask is political, and that wearing one infringes on their civil liberties.

President Donald Trump recently told the The Wall Street Journal that masks are “a double-edged sword” and suggested that masks are being worn as a political statement, rather than a health precaution, to show disapproval of him.

California has a statewide face covering rule requiring people to wear a mask anywhere they come within six feet of others. People with medical conditions who can’t wear masks are exempt from wearing a face covering.

A spokesperson for the County of San Diego told CNN that businesses determine if they want to serve customers who don’t wear face masks, and can choose to accommodate them with to-go orders or curbside service.

According to Starbucks, many locations — depending on local mandates — allow customers who aren’t wearing masks to order at the drive-thru or use mobile order and pay to pick up their oder at the front door. They can also order delivery.

“We want everyone to feel welcome in our stores,” a Starbucks spokesperson told CNN in a statement. “We respectfully request customers follow social distancing and safety protocols recommended by public health officials, including wearing a facial covering when visiting our stores.”