A soon-to-be father, a beloved brother and a state champion among US service members killed in Kabul attack 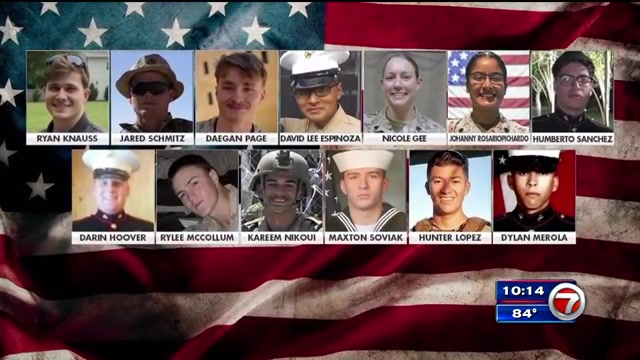 (CNN) — The Department of Defense has released the names of the 13 US service members who were killed in an attack outside Kabul’s airport on Thursday, as the US and other Western countries raced to evacuate their citizens and allies out of Afghanistan.

Here’s what we know about some of those who gave their lives in service to their country.

Army Staff Sgt. Ryan Knauss, 23, of Corryton, in east Tennessee, enlisted right after graduating from Gibbs High School, his grandmother told CNN affiliate WVLT. He joined the Army in May 2016.

He had previously spent nine months in Afghanistan; he was deployed again amid the US withdrawal and had only been back in the country for a week when the attack happened, his grandmother said.

Knauss’ grandparents said his role was to check people’s tickets and paperwork before they boarded flights leaving Afghanistan, WVLT reported.

US Rep. Tim Burchett, whose district includes Knauss’ hometown, said in a statement, “Ryan gave his life outside that airport helping people he didn’t know get to safety. This is what true heroism looks like and Ryan’s sacrifice will never be forgotten. The Knauss family is in my prayers.” Knauss is survived by his wife.

Knauss was assigned to 9th PSYOP Battalion, 8th PSYOP Group, Fort Bragg, North Carolina. He was the only member of the Army to be killed; the others were a Navy corpsman and 11 Marines.

Roice McCollum, the older sister of US Marine Rylee McCollum, told CNN her brother, who was 20 years old, was “an amazing man with a passion for the Marines.”

He was a lance corporal, she added.

“He was a son, a brother, a husband and a father with a baby due in just 3 weeks,” she told CNN in a statement, adding that Rylee had wanted to be a Marine his whole life, so much so that even as a toddler he carried around a toy rifle in his diapers and cowboy boots.

Roice said that her brother, a native of Wyoming, was on his first deployment and had been determined to be infantry. He was sent to Afghanistan when the evacuation began and had been manning the check point when the suicide bomb went off, she said.

“Rylee wanted to be a history teacher and a wrestling coach when he finished serving his country,” she said. “Rylee will always be a hero, not just for the ultimate sacrifice he made for our country but for the way he impacted every life around him for the better. Making us stronger, kinder, teaching us to love deeper. We love you Rylee.”

He was tough but a kind and loving person that “made an impact on everyone he met,” his sister said.

Two GoFundMe pages have been created for McCollum’s family.

Cpl. Daegan Page was 23 years old, his family said in a statement provided to CNN.

“Daegan will always be remembered for his tough outer shell and giant heart,” the family statement said. “Our hearts are broken, but we are thankful for the friends and family who are surrounding us during this time.”

They said he planned to possibly become a lineman once his Marine enlistment was finished.

Page was raised partly in Iowa and near Omaha, Nebraska, and served at Camp Pendleton in California. He had four siblings, the statement added.

“He loved hunting and spending time outdoors with his dad, as well as being out on the water,” the family said. “He was also an animal lover with a soft spot in his heart for dogs.”

Page joined the US Marine Corps after graduating from Millard South High School, the statement added.

He was a longtime Boy Scout and “he enjoyed playing hockey for Omaha Westside in the Omaha Hockey Club and was a diehard Chicago Blackhawks fan.”

US Navy corpsman Maxton Soviak “was most proud to be a Navy corpsman and a ‘devil doc’ for the Marines,” his parents, Kip and Rachel Soviak, told CNN in a statement.

“His final words to (Rachel) over FaceTime, when he was telling her goodbye was after she told him to be safe and he said ‘Don’t worry mom, my guys got me they won’t let anything happen to me.’ Today she realized that they all just went together,” the statement said.

They described Maxton as an “awesome young man” who was “well liked in the community as evidenced by the outpouring of condolences from teachers, coaches, employers, family, and friends.”

“Maxton was always proud of being part of a state champion wrestling team and state playoff final four football team two years in a row,” the statement added.

Soviak had 12 brothers and sisters.

A GoFundMe page for Soviak’s family has been set up.

Marine Corps Cpl. Hunter Lopez, 22, of Indio, California, was also identified as one of the US service members killed Thursday.

Alicia Lopez, his mother, described her son as a resourceful child with a promising future and spoke about an earlier exchange between the two after he shared a picture of himself with a small Afghan boy.

“My son called me and told me that the photo of him and the little boy, he scooped up the boy and carried him on his shoulders for 5 miles to safety. He told me, ‘mama we are so resourceful. We hot-wired a car and got back to base to be safe,'” she told CNN on Saturday.

“My son was going places,” his mother added.

Lopez grew up in Southern California, and both of his parents work for the Riverside County Sheriff’s Department.

He “planned on following his parent’s footsteps and becoming a Riverside County Sheriff’s Deputy after returning home from his current deployment,” a statement from the department said.

He joined the Marines in 2017 and was assigned to the 2nd Battalion, 1st Marines, the statement added.

His family is flying to Dover Air Force Base soon to claim his remains, his mother said.

The family of Marine Corps Lance Cpl. Jared M. Schmitz, 20, is also going to Dover Saturday, his father, Mark Schmitz, said in a statement to CNN.

“The love and support that we have experienced is incredible. [Jared’s] entire world was the US Marine Corps,” his father wrote. “Ever since he committed himself to the Marines in high school, he wanted to join. He showed a level of dedication that I haven’t seen.”

Schmitz was from Wentzville, Missouri, and was particularly close to his 9-year-old special needs sister, his father said.

“She worshipped the ground he walked on,” Schmitz wrote in his statement. “He would meet her at the bus stop every day and walk home. It really made her day.”

“She would get a kick out of making her backpack heavier to get on his nerves, but of course he just turned that into training,” he added.

Schmitz’s father added his son was a “great friend.”

“I didn’t know it was possible to be as proud of someone as I am of him now,” he wrote. “At first, I was terrified for him to join the Corps, but with his dedication — in the end he was doing what he loved and what was his mission was in life.”

Missouri Sen. Josh Hawley said on Twitter Friday that he spoke with Schmitz’s family and promised “that his service and his legacy will not be forgotten.”

Marine Corps Sgt. Nicole L. Gee, 23, of Sacramento, California, was also identified by the Defense Department as one of those killed Thursday.

Just six days before the deadly attack, the department posted a photo on social media that was taken from Gee’s Instagram account and showed her holding an Afghan infant with the caption, “I love my job.”

Following the attack, Gee’s friend, Mallory Harrison, posted a powerful tribute on Facebook Friday, calling Gee “my very best friend, my person, my sister forever. My other half.”

“We were boots together, Corporals together, & then Sergeants together. Roommates for over 3 years now, from the barracks at MOS school to our house here. We’ve been attached at the hip from the beginning,” Harrison wrote. “I can’t quite describe the feeling I get when I force myself to come back to reality & think about how I’m never going to see her again. How her last breath was taken doing what she loved — helping people — at HKIA in Afghanistan. Then there was an explosion. And just like that, she’s gone.”

Harrison goes on to explain that Gee’s car has been parked in the lot near the shop where Harrison works, and that she used it while she was getting her own car fixed.

“I drove it around the parking lot every once in a while to make sure it would be good for when she came home,” Harrison wrote. “Her car is still there, & she’s gone forever.”

“My best friend. 23 years old. Gone. I find peace knowing that she left this world doing what she loved,” Gee’s friend added in the post. “She was a Marine’s Marine. She cared about people. She loved fiercely. She was a light in this dark world. She was my person.”

A GoFundMe page was created by Gee’s family to help fund travel to the funeral.

Marine Corps Staff Sgt. Darin T. Hoover, 31, of Salt Lake City, Utah, was identified by the Defense Department as one of the service members killed in the attack.

“His selfless service and courage are remembered by those who served with him and those who knew him,” a verified GoFundMe page says. “This GoFundMe is to support his mother, siblings, and fiancé during their time of loss, as well as any expenses that arise for the burial.”

According to the page, Hoover is survived by his parents, two sisters and his fiancée.

His father, Darin Hoover, said his son was “the best son that two parents could ever ask for.”

“Loving, caring, big ole teddy bear,” his father said in a statement obtained by CNN. “He was always the one to step up and defend the little guy. His heart was as big as can be. As a parent, I could not be more proud of the man that Taylor had become.”

“He has ALWAYS been MY HERO,” his father added. “This day is seared into my soul and will be forever.”

Hoover’s two sisters and mother also shared memories of him with CNN.

“My Bubba was so much more than this tragedy. He is my brother and my best friend. He loves to make everyone laugh especially his two little nieces that he loved and adored,” his older sister, Tori Manning, said in a statement. “I’d give anything to speak with him one more time and hear his pep talks.”

Marine Corps Lance Cpl. Kareem M. Nikoui, 20, of Norco, California, was a “true hero,” according to a verified GoFundMe page set up by a family friend and Nikoui’s aunt.

“He was a light in our family,” his aunt, Jaimee Chappell Wong, wrote. “Funny, charming, driven, talented & dedicated to being a Marine. This was my sister’s worst fear & it has now come to life. As you can imagine, the pain for them is unbearable.”

The family is hoping to raise money for things including gas and groceries to help “lighten the load as they mourn & navigate this awful reality,” Wong wrote.

The other victims include Marines and Navy service members

On Saturday, the Department of Defense released the names of those killed in the attack on Thursday.

For the Marine Corps, the deceased also included: