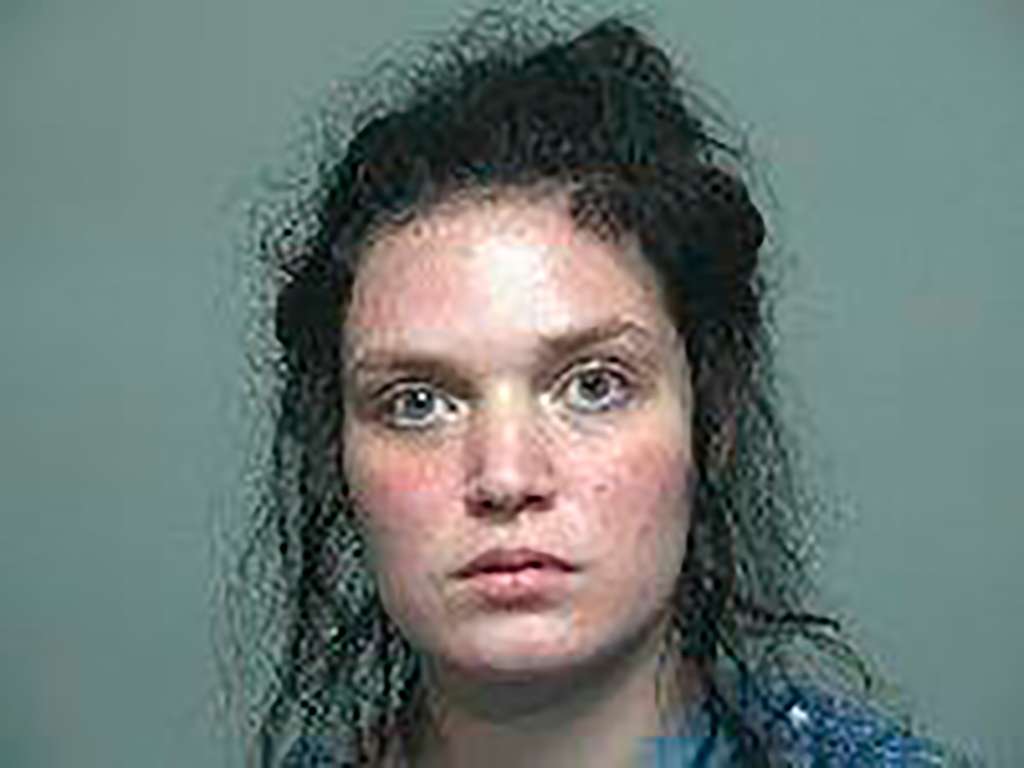 This undated photo provided by the Iosco County Sheriff's Office in Tawas City, Mich. shows Justine Johnson. Authorities have charged Johnson with murder days after her 3-year-old daughter's body was found with multiple stab wounds inside a garbage bag. Justine Johnson was arraigned Monday, Sept. 20, 2021, in 81st District Court in Tawas City, on one count each of felony murder and first-degree child abuse. (Iosco County Sheriff's Office via AP)

(CNN) — A 22-year-old mother charged with the murder of her 3-year-old daughter claimed she heard voices from her television telling her to hurt her daughter prior to the girl’s death, according to a police report.

Justine Johnson has pleaded not guilty to one count of felony murder and one count of first-degree child abuse, according to the Iosco County, Michigan, Prosecutors’ Office. She is being held without bond. An attorney for Johnson declined to comment when reached by CNN.

According to the police report provided to CNN by prosecutors, Johnson told an official from Iosco County Child Protective Services (CPS) that the cartoon “SpongeBob SquarePants” was on TV when she heard voices through the television and that the television threatened to kill Johnson unless she hurt her daughter, Sutton Mosser.

A CPS official told police Johnson said she was going through heroin withdrawal and used cocaine the day she allegedly killed Sutton, who had turned three years old two days prior to her death, the police report says.

“My office intends to proceed to trial, so a jury” can make a determination of guilt, Iosco County Prosecutor James A. Bacarella told CNN. “This case is a horrible tragedy and I cannot imagine the level of grief felt by the family that loved this child.”

Reached for comment, Johnson’s mother, Alisa Johnson, told CNN, “My daughter loved her child” and “the people are portraying her as someone she is not.”

According to a police report, Oscoda Township Police officers responded in the early morning hours of September 17, 2021, to a home in Oscoda Township after Johnson’s brother, Knesley Johnson, called police and reported finding a human foot sticking out of a black garbage bag.

Johnson’s other brother — a teenager — told investigators he’d woken up around 6 p.m. the evening before and saw his sister doing what he believed were drugs in the bathroom, the report says. He told police he’d asked Johnson where Sutton was, to which he said she replied, “mind your f***ing business.”

The teen left for a few hours, and when he returned home that night, no one was home, he told police. When Knesley Johnson arrived home from work, the younger brother asked about Justine’s whereabouts, the report says. He then began searching around the home, when he found the foot sticking out of the bag, the report says. He then alerted his brother Knesley, who called the police.

When police arrived, they confirmed that the bag contained the body of a girl who would be identified as Sutton, the report says. She had suffered multiple stab wounds.

Police located Justine Johnson soon after, walking along a railroad track. She was initially detained, but refused to answer questions by detectives, the report says. She was arrested later that day.

The child had been living at the home, which was owned by her grandmother Alisa Johnson. Alisa told police she’d urged Justine to stay at the house with her daughter more often instead of at her own apartment, so she could help Justine care for Sutton. Alisa Johnson told police they had been staying at her home for about a month and a half.

During the investigation, police accessed Johnson’s apartment, where the report says they found blood on the floor. The report also said a bathtub upstairs was partially full of water and that it showed “a red tint consistent with blood.” It’s unclear whose blood was found in the apartment.

Police informed CPS about the death, and the agency opened its own investigation. As part of that inquiry, the CPS specialist assigned to the case interviewed Johnson on October 1.

The specialist told police that Johnson said she was going through opiate withdrawals and using cocaine the day her daughter was killed, according to the police report.

According to a recording of their conversation described in the police report, Johnson told the specialist that “SpongeBob SquarePants” was playing on the TV at her mother’s house. She said that the television told her “they were going to kill me” if she didn’t hurt her daughter, the police report says. Johnson also said she’d “blacked out” and did not remember having hurt Sutton.

Afterwards, Johnson said she had gone to her own home, tried to kill herself, and then was heading back to her mother’s house when the police found her, according to the police report.

Johnson appeared in court February 4, at which point the judge found probable cause for the case to go trial. She’s next due in court on February 28.