A man died from rabies after waking up to a bat in his room. It’s Illinois’ first human case of the virus in nearly 70 years 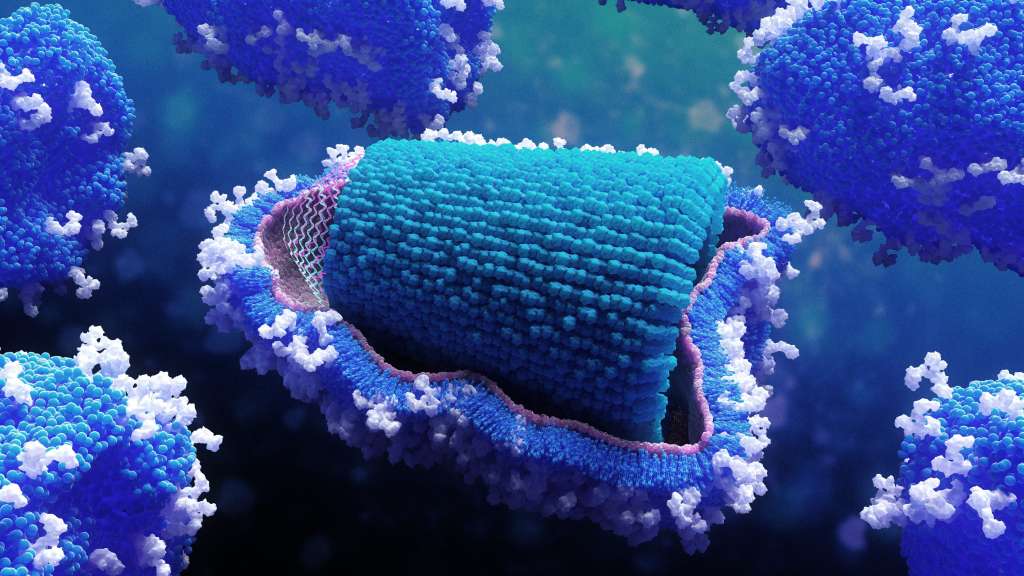 Rabies virus, illustration. Rabies virus is a member of the Rhabdoviridae family. This bullet-shaped enveloped virus has a protein coat (capsid, blue), which is made up of helically arranged subunits called capsomeres. Within the coat is the genetic material in the form of single-stranded ribonucleic acid (RNA). The rabies virus is transmitted to humans from an infected animal bite. Symptoms appear after an incubation period of 10 days to 1 year and include fever, breathing difficulties, muscle spasms, and hydrophobia. (Photo by: SCIENCE PHOTO LIBRARY via AP Images)

(CNN) — A man in northeastern Illinois died from rabies about a month after apparently being infected by a bat he found in his room, marking the first human case of the virus in the state since 1954, health officials said Tuesday.

The man, who was in his 80s, woke up last month and found a bat on his neck in his Lake County, Illinois, home. After the bat tested positive for rabies, the man declined postexposure treatment, the Illinois Department of Public Health (IDPH) said in a news release.

About a month after his exposure, the man started suffering from neck pain, headache, numbness in his fingers, difficulty controlling his arms and trouble speaking, health officials said.

The US Centers for Disease Control and Prevention (CDC) on Tuesday confirmed the man’s diagnosis after testing at its lab.

“Rabies has the highest mortality rate of any disease,” IDPH Director Dr. Ngozi Ezike said in the news release. “However, there is life-saving treatment for individuals who quickly seek care after being exposed to an animal with rabies.”

The rabies virus is transmitted through direct contact with an infected animal, including through the saliva or brain and nervous system tissue, according to the CDC. The rabies virus attacks the central nervous system, causing a brain disease that can lead to death without treatment, the CDC explained.

Human rabies infections are rare in the United States, with one to three cases reported each year, IDPH said. Still, an estimated 60,000 Americans receive the post-exposure vaccination series each year.

Illinois public health officials caution that even though people are usually aware when they have been bitten by a bat, they “have very small teeth and the bite mark may not be easy to see.”

The state health department advises that people who come in close to a bat should not release it until it can be tested for rabies. People are also encouraged to contact their local health officials who can ascertain whether they have been exposed and what course of action is needed.

Most US rabies cases stem from bats, CDC says

A 2019 CDC report found that bats are the cause of seven out of 10 cases of rabies in the United States.

Researchers examined rabies trends in the US over the span of 80 years, from 1938 to 2018. They found that most infections came from dog bites until 1960, when wildlife species — specifically bats — became the primary source for human infection. This followed nationwide efforts in the 1950s to mandate pet vaccines and implement leash control laws, the report stated.

The number of rabies deaths in the US ranged from 30 to 50 per year in the 1940s but has dropped to one to three deaths per year. That’s the result of routine pet vaccination and availability of post-exposure treatment.

In June, the CDC suspended the importation of dogs from more than 100 countries it deems as having a high rabies risk. The move affects dog rescue missions, imports from dog breeders and people bringing in pets, the CDC explained.

The decision was made based on a combination of factors, the CDC said, including the coronavirus pandemic, lack of facilities for quarantining dogs safely and three recent incidents of infected dogs that were brought into the country.