A grocery store threw out $35,000 in food that a woman intentionally coughed on, police said 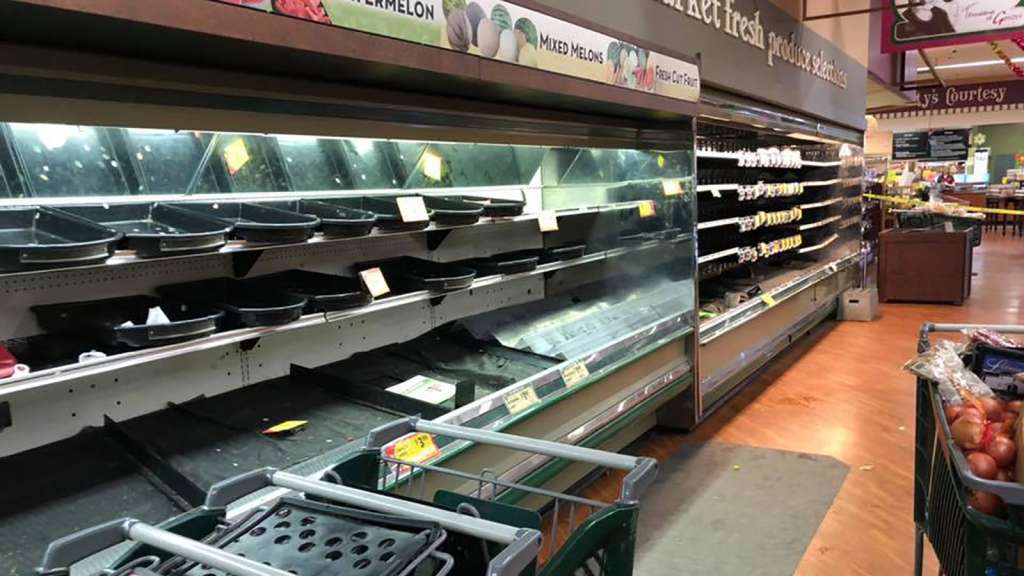 (CNN) — A woman purposely coughed on $35,000 worth of food at a Pennsylvania grocery store, police said. She likely faces criminal charges for coughing, one of the primary ways the novel coronavirus spreads.

Staff quickly removed her from the store and called Hanover Township Police, who found her a few hours later and took her into custody, Police Chief Albert Walker told CNN.

Hanover Township police said the woman “intentionally contaminated” the food, and they plan to file criminal charges against her once her mental health treatment concludes.

Officials don’t believe she’s infected with coronavirus but “will make every effort to see that she is tested,” Fasula wrote.

Despite considering what she did a “very twisted prank,” Fasula said the store threw out every item she came into contact with and worked with a local health inspector to identify and disinfect areas she entered.

“I am absolutely sick to my stomach about the loss of food,” Fasula said. “While it is always a shame when food is wasted, in these times when so many people are worried about the security of our food supply, it is even more disturbing.”

It’s not clear what charges the woman may face when she leaves mental health treatment.

People who threatened to spread the virus charged with terrorism

The Department of Justice affirmed Wednesday that people who intentionally spread the novel coronavirus could be charged with terrorism.

Officials across the states are taking threats of spreading coronavirus seriously. Earlier this week, a New Jersey man who police said purposely coughed on a grocery store employee and said he had coronavirus was charged with making “terroristic threats.” It was not clear whether the man had a lawyer, the state’s attorney general said.

And in Missouri, a 26-year-old man was charged this week with making a terrorist threat after he was filmed in early March licking sticks of deodorant at a Walmart, the St. Louis Post-Dispatch reported. In a video, the man asks, “Who’s scared of coronavirus?” the newspaper reported.

That man’s attorney called the action “immature … tasteless and impulsive” but said it happened before the World Health Organization declared the virus a pandemic, the Post-Dispatch reported. That declaration “should not work retroactively and convert a tasteless and impulsive act into a criminal terrorist threat,” the lawyer told the paper.

According to a Justice Department memo, the virus meets the criteria for a “biological agent,” and threatening to spread it or “use Covid-19 as a weapon against Americans” could constitute a terrorist threat.

Coronavirus is changing the way grocery stores operate. Stores like Gerrity’s are deemed “essential businesses” under states’ stay-at-home orders, so they’re one of the few public places residents of those states can visit during the pandemic.

But as customer visits to grocery stores spike and consumers continue to hoard supplies, industry groups fear that the US food supply will eventually dry up, too. A group that represents brands like PepsiCo and Clorox wrote to the State Department that panic buying coupled with countries cutting off exports to the US could exacerbate the public health crisis.

So stores like Gerrity’s are taking extra measures to ensure their stores are safe. Some chains have slashed hours to disinfect stores after closing and restock supplies that sell out quickly. Others have beefed up security and installed off-duty police officers or private guards to manage crowded aisles and jammed parking lots.

The incident with the unnamed woman at Gerrity’s showed employees why their strict safety measures are necessary, Fasula wrote on Facebook.

“The only silver lining to this travesty is that it gave us the unfortunate opportunity to test our protocols and demonstrate how seriously we take your safety,” he said.