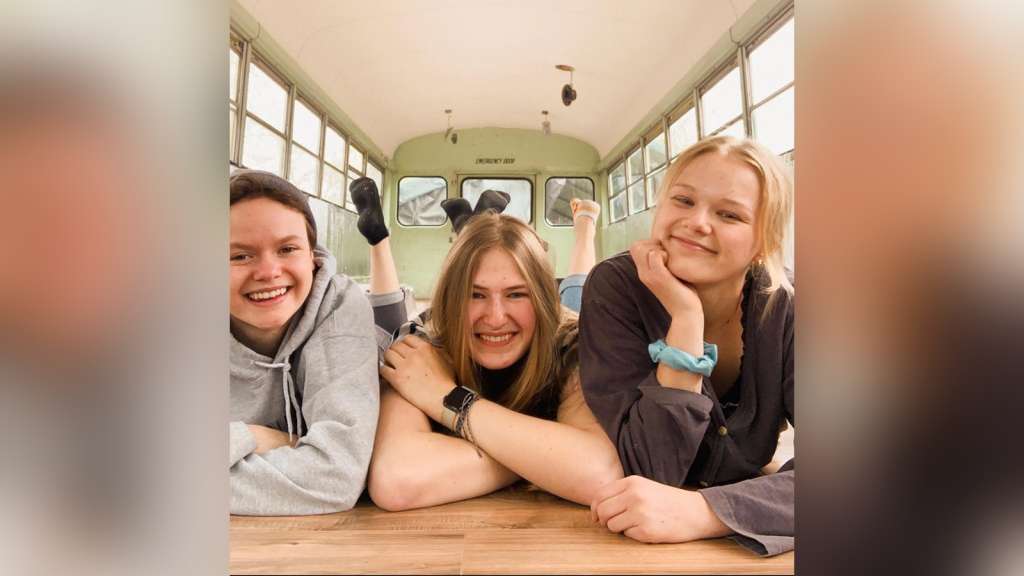 From left to right, Bekah King, Abi Roberts, and Morgan Tabor on the floor of their bus. (Courtesy Morgan Tabor)

(CNN) — Bekah King, Abi Roberts, and Morgan Tabor have a lot in common. They describe themselves as free-spirited adventurers and fearless risk-takers, all obsessed with music and the movie “Megamind.”

They say they also unknowingly had the same boyfriend at the same time.

Following their discovery, rather than succumbing to their sadness the three young women said they dumped him, saved up money, purchased a school bus and spent over two months renovating it.

On June 25, the trio took their 30-year-old bus — which they renamed the BAM bus after their initials — on a road trip across the Western United States and into the next chapter of their lives.

The discovery that changed everything

The three young women made the heartbreaking discovery on a cold, snowy afternoon in December 2020, when Tabor, 21, suddenly felt waves of suspicion about her boyfriend.

After deep diving into his social media, she discovered another woman’s page on VSCO, a photography app, flooded with photos of her and Tabor’s boyfriend.

“I have no words to describe the feeling I got seeing the photo of him with another girl,” Tabor, who lives in Boise, Idaho, told CNN. “I thought I was going to marry this guy. We had talked about houses and what our marriage would be like. My world came crumbling down. I had to mourn the loss of this future we were building up together. It was soul crushing.”

She reached out to the woman — who is now best friends with Tabor, Roberts and King but couldn’t join them on the road trip — and they kept digging. Eventually, they found Roberts via his social media comments and likes.

They quickly reached out to her and realized he was her boyfriend, too.

“I was crushed,” Roberts, 19, told CNN. “I cried in front of these two girls I never met before. It was really emotional. It felt like there was no light at the end of the tunnel.”

The three of them ended up on a six-hour FaceTime call, in the middle of which Tabor heard a knock on her door. She looked outside and saw their cheating boyfriend standing at her door with flowers.

“He wanted to surprised her. Morgan grabs the flowers, puts them on the floor, and was like ‘I made some new friends today’ and showed him her phone with the two of us on FaceTime,” Roberts, who lives in lives in Salt Lake City, Utah, said. “His face just dropped. It was so priceless to see.”

After offering excuses and explanations — including one where he said he believed it was OK to be with multiple women at the same time — the girls dumped him. Together.

Following the confrontation, the young women continued their search through his social media account, where they discovered their now ex-boyfriend had been dating six women in total, including them.

One of those women was Bekah King, who also lives in Boise, and had been casually dating him for five months.

“Two hours after they confronted him and he promised to never talk to another woman again and said he was a changed man, he reached out to me and asked to hang out,” King, 18, told CNN. “The next day, the girls found my Instagram and messaged me and we immediately hopped another five hour call.”

Within days, heartbreak turned into healing as King, Roberts, and Tabor girls quickly became friends. It didn’t take long for them to realize they all had the same dream: buying a bus and exploring the country.

“The ball started rolling from there. We wanted to live out this dream found our group of adventure people?” Tabor said. “Having that from the beginning, just something we could look forward to, helped so much. We were living out our dream. It was something so needed during a really hard time.”

Moving on to ‘the next chapter’ of their lives

In March, the girls found the vehicle of their dreams — a green school bus that once belonged to a fire crew.

That BAM bus, as they called it, took months of renovations — they put down floor boards, repainted the outside, built bunk beds and a roof deck and put in insulation.

The trio saved up around $5,000 altogether to purchase and renovate the bus, which was finally ready to hit the road on June 25.

Before heading out, the girls made sure they felt mentally prepared and healed after the ordeal they had gone through together.

“We don’t talk about him anymore. He isn’t part of our lives. There’s so much more to look forward to,” Tabor said. “He’s on the way back corner of our minds. We have moved on to the next chapter of our lives. It’s all about our adventure, our growth, and where we go next.”

Their road trip started in Idaho. They then made way their way east, spending time soaking in hot springs, taking dips in lakes and visiting Grand Teton National Park in Wyoming. They also stopped Yellowstone National Park on their way to Montana, where they are currently camping in Bozeman.

“If I had a word to describe this whole experience, it would be surreal,” Roberts said. “From the moment we pulled out of the driveway in Boise, we have met so many incredible people at campgrounds, on hikes, through our Instagram. We learned so much from so many inspiring people and the amazing nature we have been able to spent time in. It’s absolutely surreal.”

The three work remotely to fund their trip on their own without help from their parents or anyone else, but often receive Venmo donations from kind strangers.

While they had intended to head back home in November, the three are considering extending the trip and finding ways to make it a sustainable, long-term situation.

“This guy doesn’t deserve any credit, but thank you for bringing us together, honestly,” Roberts said. “We’ve been saying ‘F you, but thank you.’ As awful and horrible as that moment was, we would all do it again just to meet each other.”