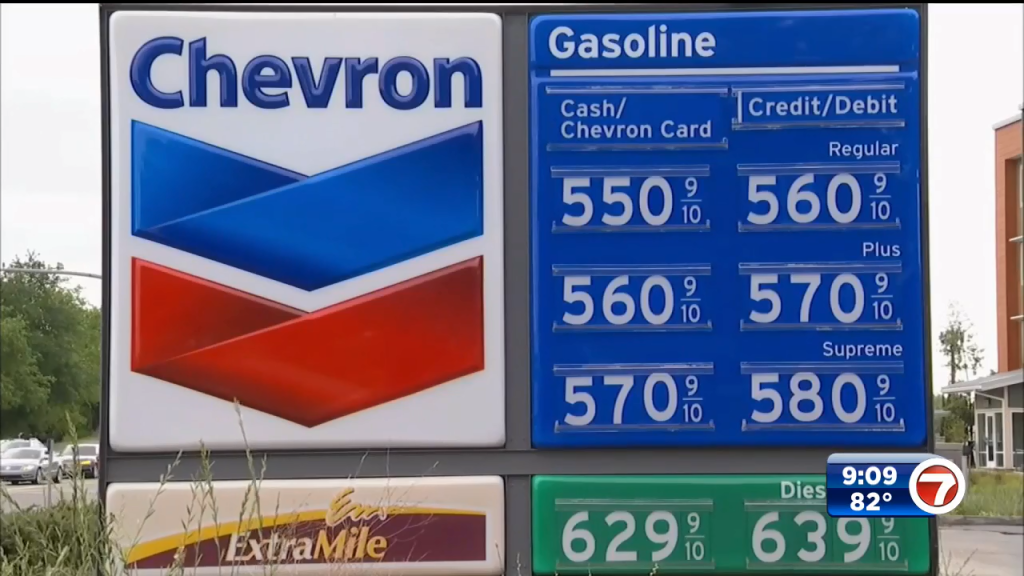 (CNN) — Oil prices have roared back to about where they were in the early days of the Ukraine war, and there’s no prospect of significant relief for drivers and businesses any time soon.

The price of Brent crude, the global benchmark, shot up past $124 a barrel earlier this week — its highest level since early March — after the European Union announced it would slash 90% of its Russian oil imports by the end of this year.

Prices have since fallen back slightly to around $117, largely because of expectations that OPEC will pump more oil, but not enough to ease the pain felt by consumers at the pump, or to tame rampant global inflation. The EU embargo and a recovery in demand in the world’s second biggest economy will keep them high.

Matt Smith, lead oil analyst for the Americas at Kpler, an analytics company, told CNN Business that “triple digit oil prices” are likely to stick around.

“If Chinese demand comes roaring back after lockdowns and Russia continues to see production drop, then a retest of the high of $139 seen earlier in the year is not beyond the realms of possibility,” he said.

Even as soaring inflation and sluggish growth raise the specter of recession, global demand for oil is unlikely to fall enough to dent prices, as it did in 2008.

“The worry this time around is — because it is a supply side issue — that even if we were to head into a recession … we may not necessarily see prices come off at the pump substantially,” Smith said.

The European Union on Friday formally adopted its oil embargo, part of a sixth package of sanctions imposed on Moscow over its invasion of Ukraine. Most EU countries now have six months to phase out imports of Russian crude, and eight months for all other oil products.

For now, Smith said, the bloc will likely continue to buy some oil from Russia, but it has been shopping around for alternate suppliers. According to Kpler data, imports of crude from Angola have tripled since the start of the war, while Brazilian and Iraqi volumes have risen by 50% and 40% respectively.

“A direct impact of this is the higher freight cost due to the longer-haul voyages, and in turn, delivered costs of the oil,” he said.

Governments can do a few things to ease prices, including offer fuel subsidies and capping prices at the pump. But the silver bullet the world really needs to bring down prices — a lot more supply — is hard to come by.

Last year, Russia, accounted for 14% of global oil supply, according to the International Energy Agency, and the West’s sanctions on Russia are already creating a significant gap in the market. Russia shut off nearly 1 million barrels per day of oil output in April and this could reach about 3 million barrels per day during the latter half of 2022, according to the IEA.

The Organization of the Petroleum Exporting Countries and its allies, a group known as OPEC+, agreed on Thursday to pump an additional 648,000 barrels of crude a day into the global market in July and August — 200,000 more than planned — in a deal that included Russia.

The IEA predicts that global oil production, excluding Russia, should rise by more than 3 million barrels a day for the rest of this year, balancing out the impact of sanctions.

But Smith thinks this could be difficult to achieve. Even before the war in Ukraine, he said, oil producers were winding down investment in production as they pivoted towards renewable energy. And OPEC has its limits.

“OPEC+ is already struggling to keep pace with the current deal — even core OPEC members such as Saudi Arabia, UAE and Kuwait exported considerably less last month than in April,” he said.

Giovanni Staunovo, a strategist at investment bank UBS, said in a Thursday note that “many OPEC+ member states have already hit their capacity limits.”

“That means effective production increases will likely be about half of the target increase,” he said.

For months, draconian coronavirus lockdowns in Shanghai and Beijing and other major Chinese cities have dented demand in the world’s biggest oil importing nation.

But as the Chinese government starts to unwind those restrictions, pent up demand could push up prices. China could also further ramp up imports of oil from Russia, whose benchmark Urals crude grade is trading at a discount of $34 a barrel to Brent.

Vortexa estimates that China imported 1.1 million barrels per day of Russian seaborne oil in May, up about 37% on last year’s average.

Kpler’s Smith said that he doesn’t expect demand in China to come “roaring back” because of its phased approach to lifting restrictions.

But “the biggest bearish influence on prices has been eliminated, hence one more reason to expect to see prices supported around current levels going forward,” he said.

Demand for fuel in the United States has also proved fairly resilient despite eye-watering prices. In the week ending Saturday, the amount of gas pumped at US gas stations fell by just 5% compared to the same week a year ago, according to OPIS, which tracks gasoline prices and consumption data.

That modest decrease happened as the national average price rose by more than 50% year-over-year to hit $4.60 a gallon in late May.