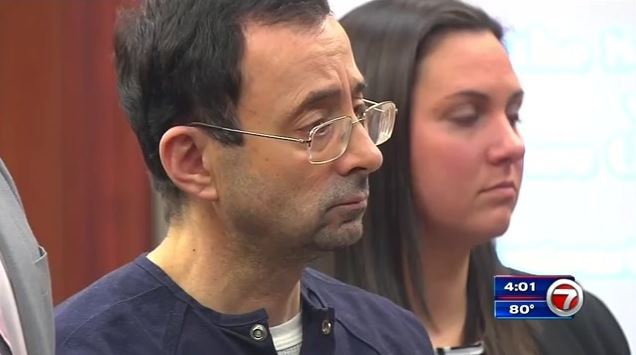 DETROIT (AP) — Thirteen sexual assault victims of Larry Nassar are seeking $10 million each from the FBI, claiming a bungled investigation by agents led to more abuse by the sports doctor, lawyers said Thursday.

It’s an effort to make the government responsible for assaults that occurred after 2015. The Justice Department’s inspector general concluded last year that the FBI made fundamental errors when it became aware of allegations against Nassar that year.

Nassar was a Michigan State University sports doctor as well as a doctor at USA Gymnastics. He is serving decades in prison for assaulting female athletes, including medal-winning Olympic gymnasts.

“We spend so much energy and resources encouraging children to come forward when they have been abused,” attorney Jamie White said. “So the fact that people came forward to the most powerful law enforcement agency in the world and were rebuffed — it’s a slap in the face.”

White is not suing the FBI yet. Under federal law, tort claims must be a filed with a government agency, which then has six months to reply. A lawsuit could follow depending on the FBI’s response.

“No one should have been assaulted after the summer of 2015 because the FBI should have done its job,” said Grace French, founder of a group called The Army of Survivors. “To know that the FBI could have helped to avoid this trauma disgusts me.”

The inspector general’s investigation was spurred by allegations that the FBI failed to promptly address complaints made in 2015 against Nassar. It took months before agents opened a formal investigation.

Nassar was arrested by state authorities in November 2016.

FBI Director Christopher Wray has said he’s “deeply and profoundly sorry” for delays in Nassar’s prosecution and the pain it caused.