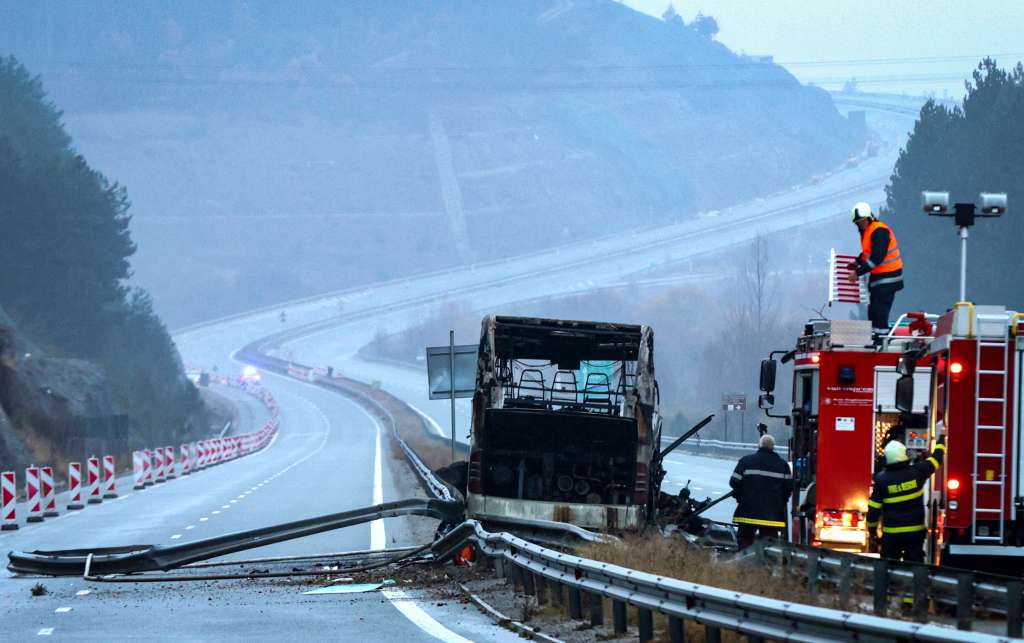 Firefighters and forensic workers inspect the scene of a bus crash which, according to authorities, killed at least 45 people on a highway near the village of Bosnek, western Bulgaria, Tuesday, Nov. 23, 2021. The bus, registered in Northern Macedonia, crashed around 2 a.m. and there were children among the victims, authorities said. (Minko Chernev/BTA Agency Bulgaria via AP)

(CNN) — At least 45 people, including 12 children, were killed when their bus crashed and erupted in flames in Bulgaria early Tuesday, authorities said.

Authorities believe the bus was carrying a total of 52 passengers, most of whom were tourists from North Macedonia, when the incident occurred at around 3 a.m. local time Tuesday.

The bus, which had a North Macedonian registration, was traveling on the Struma highway west of the Bulgarian capital Sofia. The bus driver was among the dead, according to Bulgarian National Television (BNT).

After initially reporting 46 deaths, authorities later said it was unclear whether 45 or 46 people had died, BNT reported.

Authorities said seven people — two women and five men — who were traveling in the back of the bus survived by breaking the windows to escape. They have been taken to Pirogov emergency hospital in Sofia and are in stable condition.

Authorities added that identification of the dead would be difficult as the bodies were severely damaged by the fire, BNT reported.

Bulgarian Interior Minister Boyko Rashkov, who visited the crash site, told reporters he saw bodies “clustered inside” and “burnt to ash.” He said “the picture is terrifying,” adding “I have never seen anything like this before.”

The cause of the accident was unclear but the bus appeared to have hit a highway barrier either before or after it caught fire, Bulgarian officials said.

Footage from Nova TV Bulgaria showed the charred remains of the bus on the side of the highway, with the mangled barrier wedged beneath the vehicle.

Emergency responders were seen standing near fire trucks and a police van while an investigator in a white protective suit surveyed the scene taking photographs. Behind the vehicle, damage to the center divider was visible with debris strewn across both sides of the highway.

Speaking alongside Rashkov, the director of Bulgaria’s National Investigation Service, Borislav Sarafov, called the incident “a huge tragedy” and offered his condolences to the families of the victims.

Sarafov said the bus was one of four belonging to a tourist company from North Macedonia that entered Bulgaria late Monday from Turkey, BNT reported. The bus was returning to Skopje, the capital of North Macedonia, from Istanbul — a journey of around 800 km (500 miles) — when the accident occurred.

At this stage in the investigation, Sarafov said officials were exploring two possible causes of the accident. “One is a human error of the bus driver, the second is a sudden technical malfunction, which led to the accident,” he said, according to BNT.

BNT reported that Rashkov added: “There is a guardrail here, which was simply taken away, which means that most likely for some reason the bus went to the right in the direction of travel and came into contact with the guardrail, which was simply destroyed. We heard all sorts of versions, including a fuel leak. I hope it will be clarified very soon and the colleagues from the investigation will do their job.”

Authorities will also be investigating the stretch of highway where the accident occurred, which is prone to traffic incidents, according to BNT.

“This is a huge tragedy,” North Macedonian Prime Minister Zoran Zaev told reporters in Sofia and expressed his condolences to relatives of the victims, Reuters reported.

Zaev said the passengers were all from North Macedonia but appeared to include a Serbian citizen and a Belgian citizen. It was unclear whether the two were among the victims or injured.

Zaev said he had spoken to one of the seven survivors who told him the passengers were sleeping when they were woken by the sound of an explosion.

He said people sitting at the back of the bus were able to break a window and jump out.

Zaev said the passengers were from various communities in North Macedonia, a country of 2 million that borders Bulgaria and is home to an ethnic Albanian minority.

In Skopje, ethnic Albanian Osman, 31, told Reuters he had come to the office of the travel agency with his brother and sister seeking information about their parents.

“We do not know if they were on the bus that crashed or not. We have no information about them. The agency is not answering the phone. Perhaps we will need to go to Bulgaria,” he said.

“Great grief for the 45 lost lives of Albanians from Northern Macedonia during the tragic accident in Bulgaria,” he said on Twitter.

Bulgarian officials have launched an investigation into the incident, state media reported.