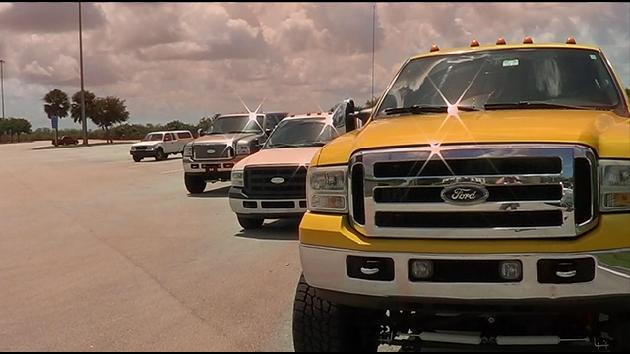 The Florida Everglades is a magical place for South Floridians who enjoy being outdoors. But it turns out alligators aren’t the only predators cruising Alligator Alley. Thieves are targeting Ford trucks.

Brett Holcomb: “I know of six that have been stolen. Mine’s been broken into three times, and they tried to steal it once.”

Brett Holcomb is the president of an airboaters club. He says, not only are trucks being taken, they’re being vandalized. No one is sure why only Ford trucks are being targeted.

Brett Holcomb: “We got the damage here, the wires, they just cut the wires right out. They go as far as breaking into the trucks. They rob tailgates. They rob parts, mirrors, it’s just ridiculous.”

It’s happening at the boat ramps that line Alligator Alley where there is no security. A good day fishing goes downhill in a hurry when you come in only to discover your trailer is there but your truck is not. It happened to Larry Archacki and his daughter on the same day.

Larry Archacki: “And then now you gotta worry about, do I have $1,000 for the deductible in case my truck is stolen? You’re scared to leave a truck out here cause it’s not a matter of if, it’s a matter of when it’s gonna happen.”

And the trucks make easy targets since, once a boat or an airboat is launched, it’s a good bet the owner won’t be back for a while.

John Rosier: “They can hear you leave, they can hear you come back, so, you know, the bass boats might be a little bit tougher, but all they got to do is look down the canal and see one coming.”

BSO Capt. Kevin Butler: “We’re also very concerned. We started to notice a trend, a pattern where F250s and F350s were being stolen out here at the ramp.”

The Broward Sheriff’s Office says it has stepped up patrols and reached out to other law enforcement agencies to keep an eye on the ramps.

Kevin Butler: “We know that they disabled devices — tracking devices in these vehicles — when they took them, so there is some sophistication to the thefts.”

There is concern an organized ring is at work. So far only one truck was recovered in Miami-Dade.

Kevin Butler: “You know, we don’t know if they’re being shipped out of the country and the vehicle we recovered, you know, they stored it until they were ready to move it out.”

Carmel Cafiero: “So far, no arrests. So if you’re coming out here for the holiday, make sure that do your best to secure your vehicle, because it’s a roll of the dice, because authorities say, if they want your truck, they’re going to get it. Carmel Cafiero, 7News.”