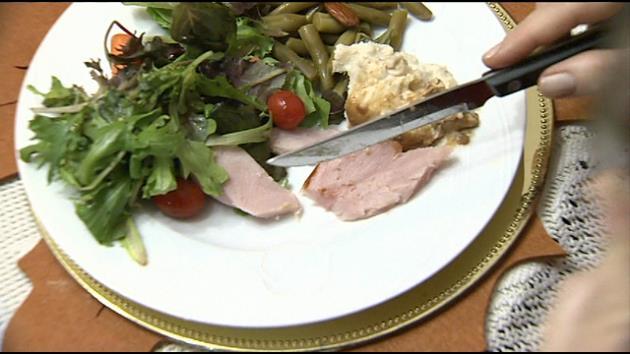 WSVN — What if we told you there are some simple tricks to avoid gaining weight during the holidays? 7’s Diana Diaz has five ways for a “Thinner Thanksgiving.”

Ahhh … the Thanksgiving table: full of people you’re thankful for and foods that you love.

But if you want to leave the table the same way you sat down you have to set down some rules.

Sheah Rarback, Director of the Nutrition Division at UM’s Mailman Center for Child Development: “The minute you wake up, don’t say, ‘I’m not going to eat because I’m eating a big meal.’ Worst strategy ever. What you want is a breakfast with a protein in it. That’s going to keep you feeling full, so when you get to your Thanksgiving meal, you’re eating not out of starvation but with good sense.”

Next up: Dress for success.

Sheah Rarback: “Good strategy is to wear clothes that fit you or are even a bit snug because then you are going to get a physical reminder, ‘Oh. I’m overeating’. No elastic waists.”

Once it’s time to eat, pack your plate with veggies.

Sheah Rarback: “First strategy at the table, visualize half your plate and fill it with vegetables. Take the next part, add the turkey, and then you’ll only have a quarter of the plate to load up those treats and delights.”

Tip number four, eat your favorites but with some modifications.

Sheah Rarback: “Turkey is a nice, tasty, lean protein but just take the skin off. By taking the skin off, you reduce it by 30 calories.”

Sheah Rarback: “One of the heavier calories loads on the that table is the sweet potatoes, which are made with brown sugar and marshmallows. You could cut about 200 calories by getting mashed potatoes.”

Sheah Rarback: “If you have a choice of pies, the apple pie could come in at 200 calories less than pecan pie.”

The last and final tip to keeping your waistline in check…

Sheah Rarback: “If you’re going to have wine, then add some sparkling water to it, and make it a wine spritzer. Then you’ve cut half the calories.”

And one more Thanksgiving tip: Don’t sit next to the buffet table. You’ll be tempted to eat more.