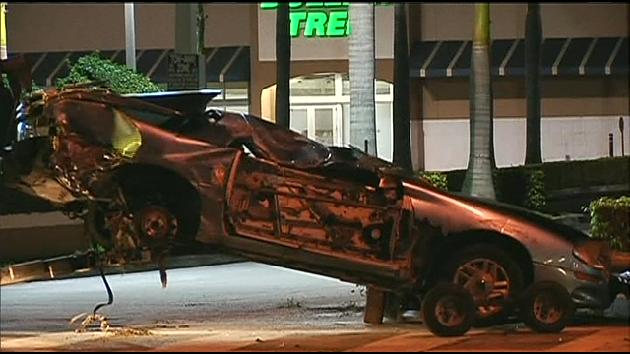 A Chevrolet Camaro was rear ended early Thursday morning, taking out light poles, folding a guard rail and sending debris flying throughout the eastbound lanes near the California Club Mall.

Witnesses were at the scene prior to the accident. “We see sparks and the car’s just flying down the street,” Vanessa St. Croix said. “Poles are being knocked out.”

The driver and passenger, John McKnight and his brother, were safe and refused to be driven to the hospital.

Michel and St. Croix watched the Camaro skid out of control for nearly a city block. Fearing the worst, Michel went to work and pulled the two victim from the crumpled vehicle.

There were no signs of the hit-and-run offender. Officials say nobody saw the driver of the impact, so there will be no criminal investigation, just plenty of cleanup.

McKnight will be cited for driving with a suspended license and no proof of insurance.

St. Croix is just glad the vehicle was the only damage to be done. “To be honest, I didn’t think they were gonna make out alive,” she said.