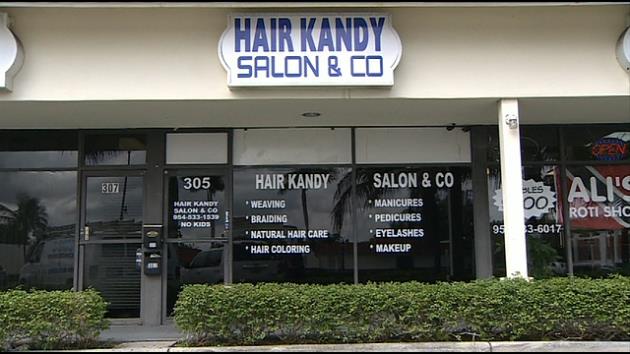 In 1999, she was a teenager who had a car accident. A judge hit her with a judgment to pay for the other drivers medical bills. For 15 years off and on she has paid that judgment and today found out she owes more than the original debt, even though she has paid nearly the amount owed. Is that legal? It’s why she called Help Me Howard with Patrick Fraser.

WSVN — When you open a business you can agonize and angst over naming it or you can let your customers do it.

Tawana Daniels: “And hair candy was one of the ones that they picked so and it was different so I just decided candy hair candy colorful hair.”

Tawana opened her Plantation salon a year ago, not a surprise since she has been doing hair since she was 13.

Tawana Daniels: “And I would go to school and the people, you know, the girls would be like ‘I want my hair like that’. I just started experimenting on them and it just went from there.”

Tawana Daniels: “And then next thing you know, I ran into the back of a van.”

Tawana was16 when she hit the van. Her mothers car was totaled. His van…

But the man sued the teenaged Tawana and her mother. In 1999, a Broward judge hit them with a $13,000 judgment that their car insurance didn’t cover.

Tawana Daniels: “And that we would have to make monthly payments until that amount was paid off.”

In 1999 Tawana’s mother started paying each month. In 2003, she passed away and Tawana had to pick up make the payments.

Tawana Daniels: “She used to pay $200 to $250, you know. I couldn’t afford that so I had to call in and make arrangements with the people and we set up a payment plan.”

By 2010, with four children, Tawana was missing payments.

Tawana Daniels: “I started receiving letters in the mail that my license would be suspended if I didn’t make these payments.”

Tawana was stunned that after paying so much on the judgment the amount owed had escalated.

Tawana Daniels: “And I’m like ‘That’s impossible. This accident happened so long ago. It happened in 1996. How could that balance be, you know, higher than the original amount.”

Well Howard, they have been paying off and on for 15 years and today Tawana owes more that they did originally. Is that legal?

Howard Finkelstein: “Yes. We have looked at the case and when the judge entered the judgment, he also awarded what is called “Post Judgment Interest” at the rate of 10 percent. That means the original amount is constantly accruing interest and if you pay more than the minimum each month, the amount owed can go up and it’s legal.”

The attorney who was collecting the judgment against Tawana sold it to another law firm. When we contacted them, they told us they had no comment and the person who answered the phone told us he was instructed to hang up. Howard says if Tawana can’t get them to agree to a lower price, she has another option.

Howard Finkelstein: “Whether you have a debt or a judgment, whether or not there is interest involved and they won’t work out a better deal for you, you can file for bankruptcy. In that case, the person owed money, gets little or nothing.”

Tawana is now meeting with an attorney and may file for bankruptcy to help get rid of that old judgment but she is also still moving ahead with her life.

Patrick Fraser: “If you owe a judgment and it’s too big to pay, don’t ignore it. Negotiate. Everything is negotiable and paying something today is much better than having it hang over your head for years. Plus the person owed the money may rather have something today than a little or nothing in the future.

Inherited a problem you can’t afford to carry around? Ready for a pay off? Contact us. We don’t pass judgment and you won’t be in our debt because we owe our success to you.