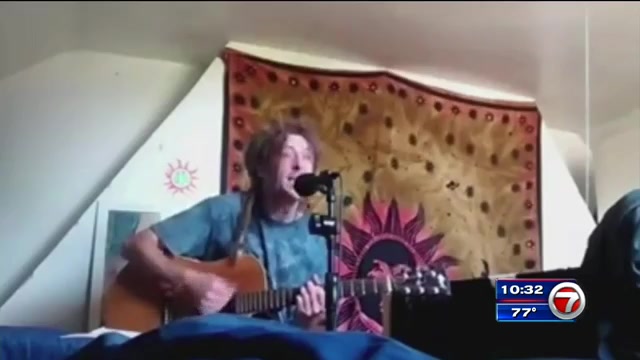 (WSVN) - We all expect great memories from our vacations, but one South Florida family took a trip overseas that changed their life, and the life of a young man they met. As 7’s Brandon Beyer explains, that man is now on a mission to say “thank you.”

Writing music and sharing it with others makes Ben Westwood happy, but he admits his life hasn’t always been something to sing about.

Ben Westwood: “At that point, I was just so use to being moved around by the state.”

As a young boy in London, Ben spent years bouncing between foster homes.

Ben Westwood: “I originally started running away from the age of 9, actually.”

At the age of 11, he was homeless … living on the streets.

Ben Westwood: “It’s hard to explain how it felt because I was a bit numb them days. I didn’t really — I couldn’t tell you, how I felt them days.”

Feeling alone, Ben gave up on the kindness of people … until one morning when a young boy showed up on this street where Ben was sleeping. The little boy offered Ben food.

To Ben’s surprise, the generosity didn’t stop there.

Ben Westwood: “And the next day, he came again with his older sister. Same thing; I said, ‘Thanks a lot’ and then, I think later that day or the next day, the whole family came.”

The boy, his sister and their parents told Ben they were from Plantation, Florida, and to his surprise, they bought him clothes and food and spent their vacation with him.

Ben Westwood: “Just doing something that homeless people never, ya know, never get the chance to do.”

But like all vacations, at the end of the week, it was over and they returned to Florida.

That was the last time Ben saw them. But nearly two decades later, he hopes to change that!

Ben Westwood: “I’ve just never ever forgot about this family, ever.”

Ben met the family sometime between 2001 and 2002 and says they were staying at a hotel on Piccadilly Street near Green Park in London.

It’s a great big world, but he reached out to 7News hoping to find the family who showed him so much kindness.

Ben Westwood: “Certainly helped me know that there’s compassion in the world.”

Ben doesn’t remember their names, but he says he’ll always remember that week.

He hopes the family from Plantation will see this story and remember him too so he can finally thank them.

We’re hoping to reunite Ben with the mystery family from Plantation. If you think you remember Ben, contact us at 7. You can also help by sharing his story on social media.