Sovereign Citizen Busted for Practicing Law Without a License 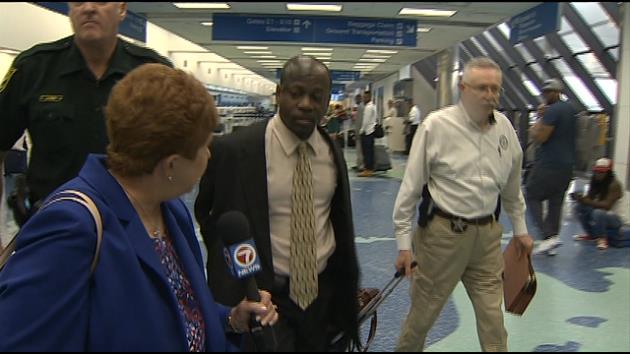 WSVN — A man who considers himself above the law found himself behind bars after being arrested for acting as an attorney without a license. Investigative reporter Carmel Cafiero is on the case.

His red-eye flight from the West Coast did not end as expected for Anthony Williams.

Anthony Williams: "Arrested for what?"

Det. John Calabro: "We have a warrant for your arrest."

The 44-year-old was cuffed and frisked at Fort Lauderdale-Hollywood International Airport. Williams is accused of 10 counts of violating a portion of the obstruction of justice law and practicing law without a license, in connection to his work at an Internet law office.

And this wasn’t his first time in handcuffs.

Anthony Williams: "I am a Hebrew-Israelite, and that’s my religious right to cover my head."

As 7News has reported, Williams has been locked up twice this year, first for refusing to remove his hat in court…

Anthony Williams: "Do you see what’s going on over here?"

And again for continuing to drive without a license, the reason he was in court in the first place. He was later released after paying a fine.

Anthony Williams: "I’m a true private attorney general, and I do take my oath serious."

Authorities consider Williams a sovereign citizen. Followers of the movement do not recognize many conventional laws. Williams calls himself everything from a foreign diplomat to private attorney general.

He even has a badge identifying himself as a sovereign peace officer, a badge he was wearing when he came off the plane this past weekend. He also carried handcuffs and a private attorney general ID.

Carmel Cafiero: "Do you think this is an indication that maybe you don’t understand the law as well as you think you do?"

Anthony Williams: "You know I know, and you’re just as dishonest as they are."

The detective who has investigated Williams described him as "arrogant" on the ride to jail.

Det. John Calabro: "In the sense that he said we didn’t have jurisdiction to arrest him. That he doesn’t believe in the laws of the state of Florida. That the Constitution prohibits us from arresting him, and we’re gonna suffer the consequences."

Carmel Cafiero: "Anthony Williams spent the night here in Broward’s main jail before being released on bond. The 10 felony charges carry possible penalties of up to 50 years in prison. Carmel Cafiero, 7News."