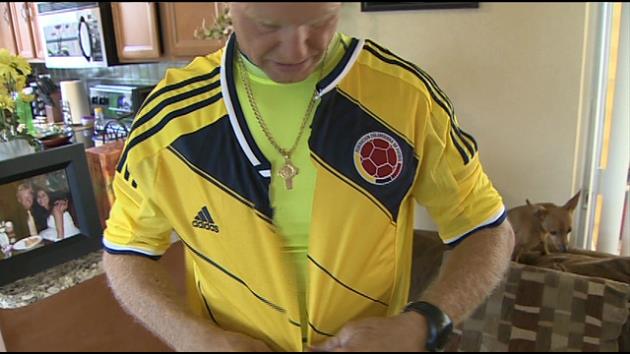 OK, you ready for this one? He ordered World Cup jerseys for himself and his wife, but they got sent to his ex-wife’s house. The jerseys got … well, I don’t want to spoil the story, but it was so amazing, he called Help Me Howard with Patrick Fraser for help.

WSVN — If you are a big soccer fan, this is the best time of the year.

Making it even better: sitting with a South Florida crowd watching their teams play in the World Cup, even if you are not from that country.

Bob Blair: “I love Colombia because they have a great team and my wife is from Colombia. Of course, I want to support her and her country.”

Bob is an American, and couldn’t wait to watch Colombia and the U.S. play their games in the World Cup with his wife Margore.

Bob also bought his 25-year-old son from a previous marriage a U.S. soccer jersey and placed the order through his son’s online account with Soccer.com. But Bob did not want the three jerseys sent to his son and ex-wife’s home.

Bob Blair: “And we specifically wanted to make sure that the jerseys went to my address and not my son’s or my ex-wife’s address.”

But the jerseys were sent to Bob’s ex-wife’s house. His son brought the box to him.

Bob Blair: “And I opened it up. The two jerseys were cut in half, and I knew exactly that she had found those jerseys, my ex-wife, and she cut them right down the middle.”

The two Colombian jerseys, intended for Bob and his second wife, were sliced in half. The American jersey for his son was fine.

Bob Blair: “He was speechless. He had nothing to say. He knew that his mom had cut them up. My son asked her, and she denied that she did anything.”

Now, Bob and his ex-wife have been divorced for eight years. You don’t have to be a marriage counselor to see they are not the best of friends, but Bob says even this surprises him.

Bob Blair: “This happened eight years ago, and they say time heals a wound, but I’m waiting for the wound to heal.”

Bob called the jersey company. They said they sent it to the address he specified, that they were not responsible for replacing the sliced-up jerseys. So Bob and his Colombian wife went to watch the next soccer game, wearing their $100 dollar matching, sliced-up Colombian jerseys.

Bob Blair: “The first Colombian game with the jerseys cut in half, so we did have the jerseys on and we’re pulling for Colombia and their group, and so if Soccer.com doesn’t replace them, then we will wear them as they are, cut in half.”

Well, Howard, Bob says the jersey company sent the shirts to the wrong address. They say, no, they didn’t, so are they responsible for the sliced-up wear, or the person who sliced them up?

Howard Finkelstein: “Even if the jerseys were sent to the wrong address, the person who sliced them up has to pay to replace them. If they won’t, and the company sent them to the wrong address, they share the responsibility and have to replace the jerseys. If they sent them to the address they were told to send them, then the blame goes back to the person who sliced them up.”

We spoke to Soccer.com, the company Bob bought the jerseys from. They told us they sent the jerseys to the address listed on the form, that they did not make a mistake. But when we told them what happened, they were amazed. Soccer.com then refunded Bob’s money and even sent him a $50 gift card.

Bob Blair: “I fell in love with soccer.”

Bob and Margore can now buy two more jerseys to cheer for Colombia, and won’t have to wear their one-of-a-kind sliced-up jerseys anymore.

Bob Blair: “I have a beautiful wife, I’m cheering for the USA for World Cup soccer, and go Colombia and the rest of the teams.”

World Cup fever: It’s fantastic. And nice of Soccer.com to refund their money and give them a gift card. Now, Howard told me something that surprised me. Legally, if you get something shipped to you, if it’s damaged, in most cases the seller is not responsible. It’s almost like a buyer beware, or buy insurance.

A world of problems cutting you to pieces? Ready to settle the score? Contact us. Hopefully we’ll achieve your goal: a victory. With this Help Me Howard, I’m Patrick Fraser, 7News.