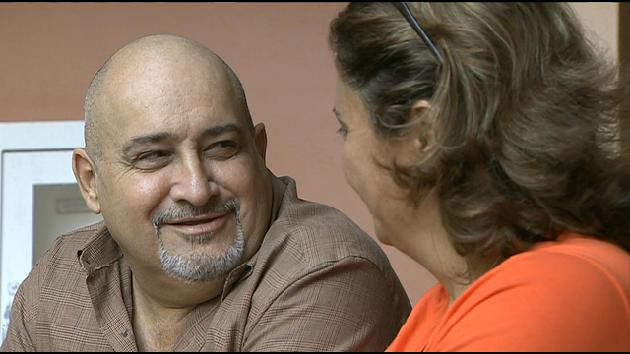 To put it plainly, some things are just meant to be.

Giraldo Canales: “First date, we actually met for lunch, at BJ’s Brewhouse, and we hit it off right off the bat.”

Six months ago Giraldo met Ana and they soon fell in love, but that’s not what makes their story amazing.

Giraldo Canales: “I’ve had kidney issues for, I would say about, I’ve known about it for eight years.”

As they started dating, Giraldo wanted Ana to know, explaining that he would soon need a kidney transplant. Ana, who is a nurse, then decided to do something without telling Giraldo.

Giraldo Canales: “No idea to me, she works real close to the transplant center at Jackson, and she went and had herself tested.”

Incredibly, Ana was a perfect match. She then told Giraldo that she wanted to donate one of her kidneys to him.

Ana Garcia: “That he will be living because of me, that is something that is just overpowering.”

In July, both Giraldo and Ana will have their kidney surgeries. Ana’s mom planned to take care of both of them as they recovered at Giraldo’s condo … till his condo association said no.

Giraldo Canales: “Can they really control who I have in my house overnight as a guest, no matter how many days they want to stay?”

At Horizons West, Ana can stay for two weeks if she gets permission from the property manager. After that, she has to get permission for another week, but after that, she cannot stay at Giraldo’s condo during his two-month recovery period unless she pays a fee, goes through a credit and criminal background check, and the board approves her.

Giraldo Canales: “I’m a grown man and I’m having to answer, at 53 years of age, who can stay at my own house.”

If Ana or her mother park their cars at Horizons West, even though there is plenty of guest parking, even if one parks in Giraldo’s space, they will be towed.

Giraldo Canales: “We’re going to be depending on her mom for rides to the doctor visits, to the hospital, but the biggest concern is her. Because she wants to be here with me for those two months to take care of me.”

Giraldo went to the association to complain about their policy, but no luck.

Giraldo Canales: “It’s ridiculous. You buy a place to live, you own it, and yet you’re being told who you can have over. It’s ridiculous, in my mind. It’s unfathomable.”

Well, Howard, it’s ridiculous to Giraldo cause this isn’t a little sleepover. This is serious, but can a condo board actually say you can’t park your car and spend the night, even for a medical reason?

Howard Finkelstein: “If it’s in their documents, yes they can. But nowhere in the Horizons West condo documents does it authorize or allow them to restrict overnight stays, whether it’s two nights or two months.”

We called the management company for Horizons West. Giraldo told us he has talked to them about his situation. They told us they were not aware of the problem. We then contacted the association’s attorney. Robert Paige didn’t talk to us, but an assistant said the association and their members value privacy. When we explained Horizons West was violating its own bylaws, the assistant told us she could not longer talk to us.

However, a few days later a management company official contacted Giraldo and told him they would allow Ana to stay overnight during his recovery period.

Howard Finkelstein: “It is nice for the board to give them two months together to recover, but still they cannot restrict the overnight stays at all. If they continue to do this, and someone sues and wins, the association will have to pay their attorney’s fees.”

The stress the board has caused is affecting Giraldo’s condition, but fortunately, he has Ana to make him smile.

Giraldo Canales: “Man, she is a super happy person, and with my condition, I’m grumpy at times. You know, it’s hard, but she manages to cheer me up, make me laugh, and we laugh together and joke around.”

We will keep an eye on them and let you know how those surgeries go. It’s only halfway through the year, but the complaints about associations and their management companies is far and away the biggest problem we are hearing about this year. I don’t know what has gotten into them.

If you think one is breaking your own condo documents or the law, contact the state’s condo Ombudsman or the Department of Professional Regulation. Both can check into your problem.

Associated with a problem that’s a pain? Wanna transplant it to us? Contact us. We have a heart, and go by one simple rule: We wanna help you out. With this Help Me Howard, I’m Patrick Fraser 7News.

Department of Business and Professional Regulation