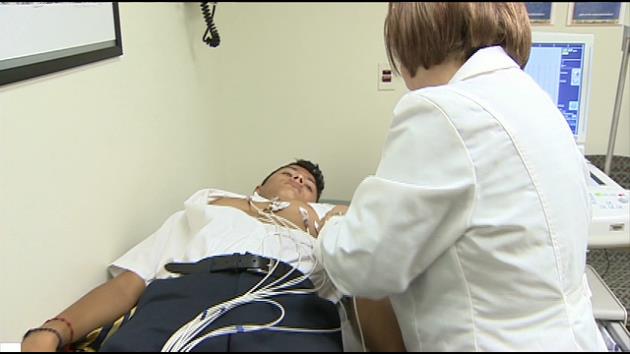 WSVN — It’s happened here and all over the nation: young athletes with unknown heart conditions suddenly dying on the field. One local hospital is successfully preventing those tragedies. 7’s Diana Diaz shows us how a simple screening is saving young lives.

Christian Burke spends almost every day on the water, rowing with the Belen Jesuit crew team.

Christian Burke: “Rowing is one of those secret sports that is a lot harder than you can imagine.”

The 16-year-old says he loves the thrill of pushing his body to the limit during races.

Christian Burke: “Your heart just keeps going higher. It’s pumping harder than it’ll ever pump. You finish that race, and you can hear your heart beat.”

Because rowing is so tough on the heart, Christian and his Belen teammates decided to get their hearts checked.

7News was there in October as the boys received EKGs at Miami Children’s Hospital.

Christian Burke: “The EKG is something super quick and you’re done in 30 seconds.”

The hospital has been offering free EKG screenings to students since 2011, and doctors say the simple test is helping to identify kids with unknown heart problems that could lead to sudden cardiac death.

Dr. Anthony Rossi: “To date, we’ve screened over 3,000 children and there are about a dozen children who’ve had some sort of heart problem that we think put them at risk.”

Turns out, Christian was like a walking time bomb. The EKG caught a heart condition that could have killed him.

Dr. Anthony Rossi: “At certain times, especially under stress, like when they are exercising, they can develop a heart rhythm problem that is lethal. They would have never known it until he had symptoms and the first symptom can be the last.”

Diana: “If anything would have happened to him, it’s not like in another sport that you’re on a football field or something. He’s out there in the water, so far from us.”

Christian just had a procedure to fix his heart problem.

Now the teenager is back to rowing without any fear.

Christian Burke: “I feel very relieved. If it wasn’t for that EKG, I would have never known.”

EKGs are important because regular physicals can’t pick up these heart conditions. Any child can get the free EKG, all you need to do is call and make an appointment.

To make an appointment for an EKG screening please call 1-855 MCH-EKGS or visit http://www.mch.com/ekg