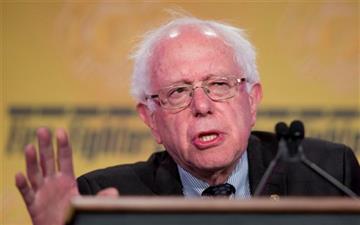 Sanders on Wednesday joined striking contract workers on Capitol Hill who are employed as cooks and janitors in a number of federal buildings in Washington and are seeking pay raises. Many earn less than $11 an hour.

"All of our workers, from coast to coast, need at least 15 bucks an hour," said Sanders, who has emerged as Clinton's main Democratic presidential rival. "What we are saying, loudly and clearly, is $7.25 an hour, the current federal minimum wage, is a starvation wage. It's got to be raised to a living wage."

His bill would phase in increases in the minimum wage to $15 an hour by 2020. While it's unlikely to pass in the Republican-controlled Congress, it puts pressure on Clinton to support the bill as cities such as Los Angeles, Seattle and San Francisco have approved phased-in increases to $15.

The University of California system joined the push on Wednesday, announcing plans to increase base pay for employees and contract workers to the $15 threshold.

Clinton has said she backs raising the minimum wage from the current $7.25 but has stopped short of signing off on $15.

In New Hampshire last week, she said she supports local efforts to make it possible for workers in some cities to earn $15 an hour. But she said many lawmakers are trying to determine "what's the national floor because there are different economic environments. And what you can do in L.A. or in New York may not work in other places."

Sanders and former Maryland Gov. Martin O'Malley have both endorsed the $15 standard. The minimum wage push comes as three Democratic presidential candidates have been meeting organized labor in recent weeks, seeking to lock down endorsements. Labor unions such as the Service Employees International Union have organized the so-called Fight for $15 in cities around the country.

The Vermont senator also called for President Barack Obama to sign an executive order to give preference for federal contracts to companies that go beyond the minimum on wages, paid leave and health coverage.

Rep. Keith Ellison, D-Minn., who released companion legislation in the House, said of Clinton: "I hope she will see the light, hopefully sooner rather than later because she's a smart person and she's a compassionate person. I hope that she will see soon that $15 is not too much when you've got CEOs making $9,000 an hour, when corporate profitability is up."