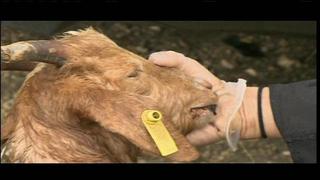 WSVN — These little goats would not live long after being sold for sacrifice for $100 each.

Richard Couto: “And this is how animal sacrifice starts. This is how the cruelty starts in Miami-Dade county right here.”

Activist Richard Couto who goes by Kudo, went undercover with another man to buy the goats. Kudo says he told the seller they would be killing them for religious sacrifices.

Richard Couto: “These animals just are treated as commodities and they’re not cared for.”

He says the animals are not fed properly, their medical needs ignored and they are shown no kindness while waiting to be sold.

And when sold, they reportedly started screaming as their legs were tied together. A veterinarian on scene said both looked underweight and sick.

Dr. Heidi Thomas: “This one also has a respiratory infection.”

Recently, the bodies of five headless goats washed up near Miami Shores. And before that 7News discovered a site that contained the skulls of domestic pets, a cat and a dog, not to mention a human skull. To people who are not practitioners sights like these can be disturbing.

Sherry Schlueter: “I have seen horrific videos of animals that had someone sawing back and forth across their throats with a dull serrated kitchen knife.”

After a 37 year career in law enforcement, much of it specializing in animal cruelty issues Sherry Schlueter now represents the Humane Society of the United States.

She says she has never seen a ritual sacrifice that was not a violation of cruelty laws.

Sherry Schlueter: “I never saw the animals handled humanely. I never saw animals killed in a manner that would not violate state law.”

Carmel Cafiero: “It is widely believed that a Supreme Court decision years ago protects religious sacrifices. But Schlueter says that’s not the case.”

Sherry Schlueter: “If the suffering is egregious, a person can be charged with a felony. Law enforcement should be addressing animal cruelty regardless of the purpose.”

She says the way workers handled the goats Kudo rescued is inhumane. He had planned to free them and nurse them back to health. But by the next morning, one was dead and within weeks the second little guy, who had been taken to a sanctuary, also died both were too sick to survive.