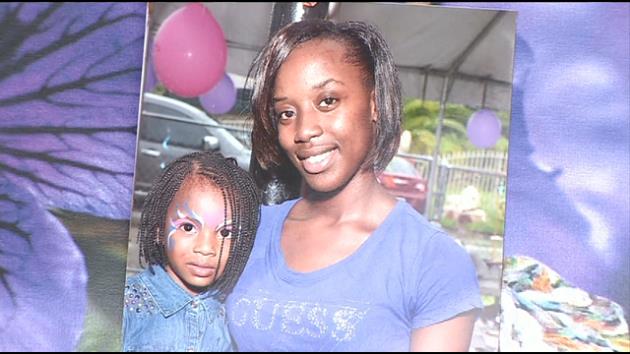 Last March, an afternoon out with friends ended in a barrage of bullets for a pregnant Miami Gardens mother. As Patrick Fraser tells us on tonight’s Out for Justice, detectives made an arrest in the case last week, but their work is far from over, and they need your help to bring in the rest of the killers.

WSVN — Qualecia James was seven months pregnant when she went out to lunch with a few of her friends.

Mary Pierce: “She was an excellent girl. She stayed with her grandmother and helped take care of her.”

Miami Gardens Police Detective Luis Gonzalez: “They were approached at a high rate of speed by the suspect vehicle, and they were shot up. They actually were shot with high-powered rifles.”

Detective Luis Gonzalez: “She was rushed to Ryder Trauma, at which time they had an emergency Caesarian and the baby was born.”

Qualecia’s mother was at home.

Marcela Pierre: “And I got a call, said that my daughter was dead. I was just like, ‘Oh, my God,’ and trying to get to her.”

Doctors at Ryder delivered Qualecia’s son alive, but the trauma from the gunshot wounds that killed his mother, slowly took his life.

Marcela Pierre: “And maybe after, like, two to three days, they called me back in, and they was like, ‘He had no brain activity.'”

The family was in shock. When we first talked to Detective Gonzalez, he was disgusted that five people would drive by a car filled with innocent people and fire high-powered rifles.

And then, Detective Gonzalez’s hard work paid off. On July 2nd, 20-year-old Antwone Jackson was arrested and charged with two counts of first-degree murder. With Jackson in jail, we spoke to Detective Gonzalez again, who now has an idea of the four other people riding with Jackson.

Detective Luis Gonzalez: “They need to be ready, because we’re going to come knocking. It’s important that they come to us now, that they speak to us and give us their side of the story.”

Why should the suspects turn themselves in? Because, Detective Gonzalez says, with Jackson sitting in a jail cell facing murder charges, he predicts he will soon start blaming others.

Detective Luis Gonzalez: “I believe Antwone is going to say [the names of] everybody else that was in that car and what they did, because nobody wants to be held responsible all on their own when four others, a total of five, were involved in this deed.”

With Jackson’s arrest, police now can answer a question that was torturing Qualecia’s mother. Why did they race up and kill her daughter? What did she do ever do to them?

The answer: nothing. The killers made a mistake. They shot at the wrong car.

Detective Luis Gonzalez: “They set out to look for someone else. They made the mistake of picking a vehicle that looked similar to that, and irresponsible and uncaring and unhuman as they are, they shot and killed a poor mother of a 3-year-old and her unborn baby.”

That’s right. Qualecia also had a 3-year-old daughter, now without a mother.

Mary Pierce: “That was a human being. Was it worth it? What price can you put on the human life?”

Marcela and family are happy one suspect is in jail, and can’t wait for someone to help Detective Gonzalez arrest the other four men who helped kill Qualecia and her baby.

Marcela Pierre: “How can you live knowing you just took somebody’s life away like that? If there’s anybody that got, like, any information for the rest of the people that were involved, pick up the phone.”

A family in pain. A little girl without her mother and baby brother. If you have any information on the other four people involved in the shooting of Qualecia James and her son, pick up the phone and give Miami-Dade Crime Stoppers a call at 305-471-TIPS.

Detective Luis Gonzalez: “We have one person in custody, but we need them all.”

And if you’ve lost a loved one and want to remind people that you, like Marcela, are still out for justice, give us a call. With this Out for Justice, I’m Patrick Fraser, 7News.