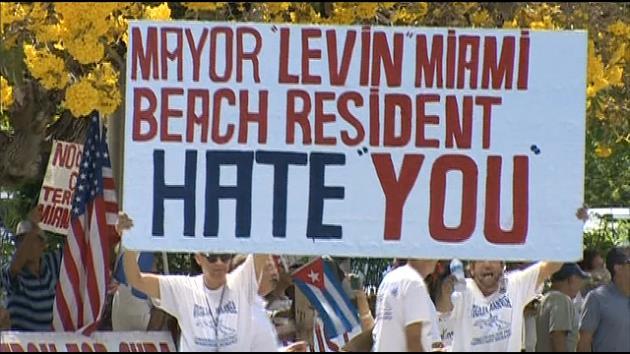 MIAMI BEACH, Fla. (WSVN) — Dozens of protesters joined together at Miami Beach City Hall on Thursday to protest a proposed Cuban consulate in the city.

The protest comes a month after Miami Beach Mayor Phillip Levine visited Havana and then proposed the plan.

Levine traveled with a group of students to Cuba last month, and as he toured the country, he stopped by the U.S. Embassy.

Protesters are strongly opposed the Mayor’s plan. "Levine, you are doing the biggest mistake of your life," said Miguel Saavedra, a protester. "Let me tell him something, I’m not voting for you never more in my life. I made a mistake voting for you because I’m expecting you to do it this way, to bring it all here, a lot of problems to Miami Beach."

A representative for Mayor Levine told 7News Levine’s position has not changed.

There had been speculation there might be a consulate opening in Tampa, but Levine said, since Miami-Dade County has the largest amount of Cuban constituents, it makes the most sense to have it here.

The mayor, however, does not have the final say. The proposal would have to be voted on by commissioners.