With virus surging, Biden to speed release of COVID vaccines 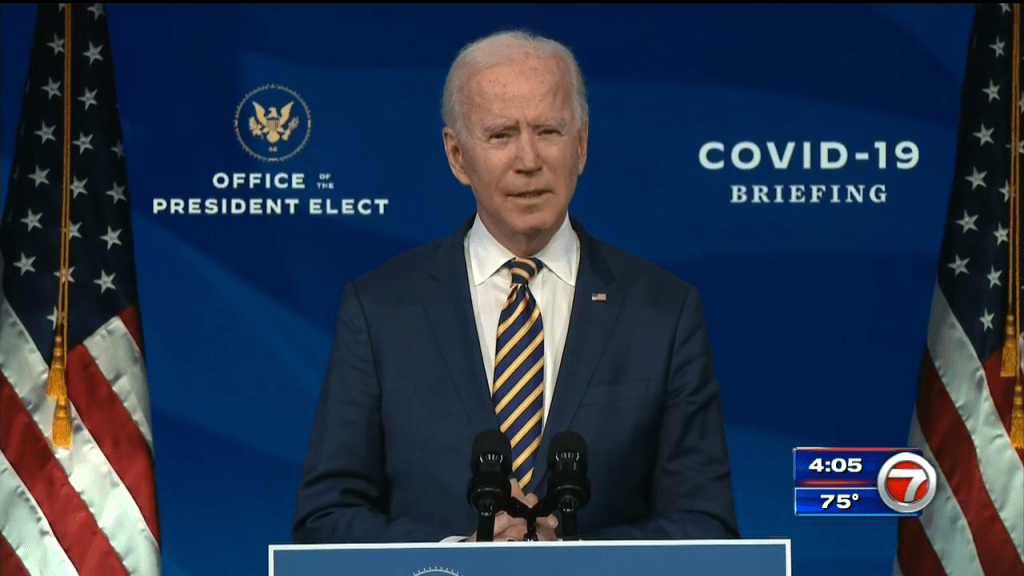 WASHINGTON (AP) — With COVID-19 surging and vaccinations off to a slow start, President-elect Joe Biden will rapidly release most available vaccine doses to protect more people, his office said Friday, a reversal of Trump administration policies.

“The president-elect believes we must accelerate distribution of the vaccine while continuing to ensure the Americans who need it most get it as soon as possible,” spokesman T.J. Ducklo said in a statement. Biden “supports releasing available doses immediately, and believes the government should stop holding back vaccine supply so we can get more shots in Americans’ arms now.”

Biden’s plan is not about cutting two-dose vaccines in half, a strategy that top government scientists recommend against. Instead, it would accelerate shipment of first doses and use the levers of government power to provide required second doses in a timely manner.

The Trump administration has been holding back millions of doses of vaccine to guarantee that people can get a second shot, which provides maximum protection against COVID-19. It’s seen as a prudent approach, since both the Pfizer-BioNTech and Moderna vaccines require a second shot after the first vaccination.

Health and Human Services Secretary Alex Azar raised questions about Biden’s plan, telling a hospital forum on Friday that “we’re pushing the system as much as I as secretary believe is ethically and legally appropriate.”

But a recent scientific analysis in the journal Annals of Internal Medicine estimated that a “flexible” approach roughly analogous to what Biden is talking about could avert an additional 23% to 29% of COVID-19 cases when compared to the “fixed” strategy the Trump administration is following. That’s assuming a steady supply of vaccine.

After a glow of hope when the first vaccines were approved last month, the nation’s inoculation campaign has gotten off to a slow start. Of 21.4 million doses distributed, about 5.9 million have been administered, or just under 28%, according to the Centers for Disease Control and Prevention.

Biden has indicated his displeasure with the progress of vaccinations.

“I think the way it’s being done now has been very, very sad,” he said at his news conference Friday.

The Trump administration’s “Operation Warp Speed” has delivered vaccines to the states, he said, “but did not get them from those vials into people’s arms,” he continued. “And so it is a gigantic logistical concern of how we do that.”

Biden says he intends to speed up vaccinations by having the federal government deliver more vaccines and take a stronger role ensuring that they are being administered.

The American Hospital Association estimates that the nation would need to vaccinate 1.8 million people a day, every day, from Jan. 1 to May 31, to reach the goal of having widespread immunity by the summer. That’s also called “herd immunity” and would involve vaccinating at least 75% of the population.

Biden has set a goal of administering 100 million shots in the first 100 days of his administration. He’s previously said that he and Vice President elect Kamala Harris have been talking with state and local leaders about meshing the efforts of governments at all levels. Among the specifics: opening up vaccination centers and sending mobile vaccine units to hard-to-reach communities.

The Biden transition office said its experts believe that pushing out available vaccine as fast as possible will not create problems for people needing their second dose. Biden will make broader use of a Cold War-era law to direct private industry to supply materials for vaccine production, should that become necessary, his office said. One-shot vaccines are moving through development.

Former Food and Drug Administration head Mark McClellan said he agrees with Biden’s decision, but the increased supply of vaccines has to be coupled with steps to get shots actually administered.

“We’re holding back more doses than we really need to,” McClellan said in an interview. But “this needs to be combined with steps to increase the administration of vaccines, or it won’t make much difference.” McClellan, who served under former Republican President George W. Bush, now leads a health policy center at Duke University.

But Azar, President Donald Trump’s health secretary, said if vaccine production doesn’t increase Biden’s approach could lead to “fits and starts” in vaccination. “What we’ve set up is a system that manages the flow, to maximize the number of first doses, but knowing there will be a second dose available,” Azar said, defending the Trump administration’s decision.

Biden announced his plan after eight Democratic governors wrote the Trump administration on Friday urging it to do as much.

“The federal government currently has upwards of 50% of currently produced vaccines held back,” the governors wrote. “While some of these life-saving vaccines are sitting in Pfizer freezers, our nation is losing 2,661 Americans each day, according to the latest seven-day average. The failure to distribute these doses to states who request them is unconscionable and unacceptable. We demand that the federal government begin distributing these reserved doses to states immediately.”

The letter was signed by Govs. Gretchen Whitmer of Michigan, Gavin Newsom of California, Laura Kelly of Kansas, J.B. Pritzker of Illinois, Tim Walz of Minnesota, Andrew Cuomo of New York, Jay Inslee of Washington, and Tony Evers of Wisconsin.

With the winter wave of the pandemic pushing deaths to record levels, and hospitals overwhelmed in cities large and small, some have called on the government to authorize using just one dose of the Pfizer and Moderna vaccines. That would indeed confer a boost of immunity.

However, government scientists including Dr. Anthony Fauci have said the vaccines should continue to be used as prescribed under their emergency approval by the FDA. The two-shot regimen provides around 95% protection.

More than 365,000 Americans have died as a result of the pandemic, according to data from Johns Hopkins University. The seven-day average positivity rate for the nation has continued to rise since Christmas, and stood at 13.6% on Thursday, according to the COVID Tracking Project. That’s well above the 10% rate considered a marker of widespread contagion.

Biden’s plan to change the vaccine distribution plan was first reported by CNN.