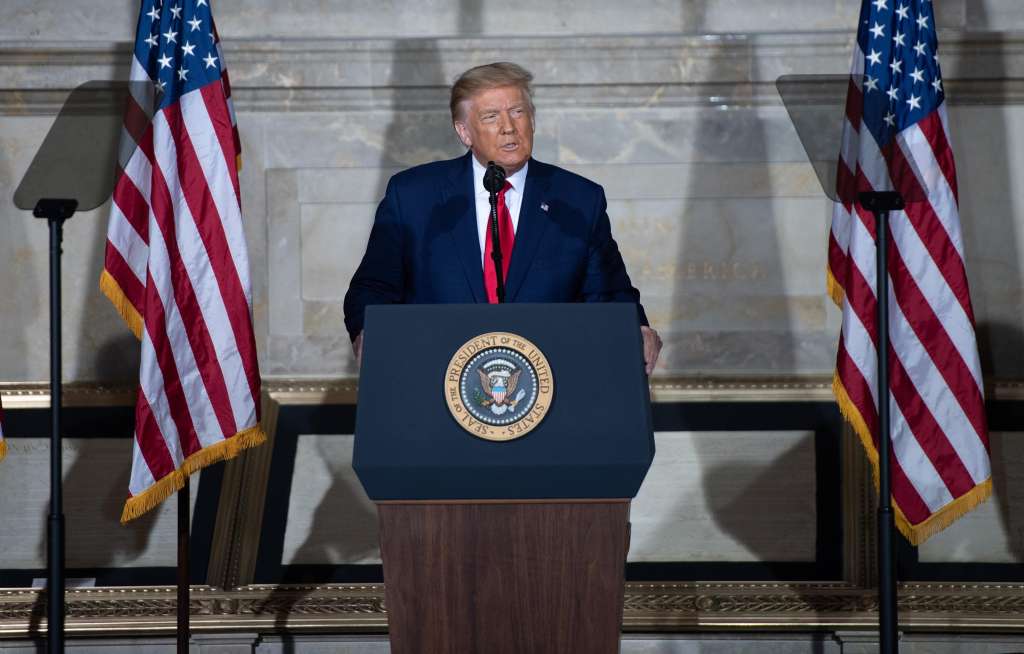 (CNN) — Former President Donald Trump filed a lawsuit Monday in DC District Court against the House select committee investigating the January 6 insurrection and the National Archives in an effort to keep records from his presidency secret by claiming executive privilege.

The lawsuit from Trump is an attempt to block the work of the House committee as it investigates his actions before and during the siege of the Capitol. The court action also marks his latest effort in a long and thorny fight against subpoenas from the Democratic-controlled US House.

The Biden administration has declined to assert executive privilege over a first tranche of Trump-era records, and Trump is currently opposed to the release of about 40 documents.

The lawsuit alleges that the House’s requests for documents from the executive branch “are unprecedented in their breadth and scope and are untethered from any legitimate legislative purpose.”

It also claims that President Joe Biden’s refusal to protect some of the documents was “a political ploy to accommodate his partisan allies.” A spokesperson for Trump leaned into this argument in a statement announcing the lawsuit that accused Democrats of trying to change the political narrative with their January 6 probe.

“Polling shows Biden’s approval cratering and 2022 slipping out of Democrats’ grasp — no wonder the Democrats and the media want to distract America from: The surrender in Afghanistan, skyrocketing inflation, a border crisis, crippling COVID mandates, and a stalled legislative agenda,” said Taylor Budowich, a spokesperson for Trump and his political organization.

Committee Chairman Bennie Thompson, a Mississippi Democrat, and Vice Chair Liz Cheney, a Wyoming Republican, responded in a joint statement Monday night that “the former President’s clear objective is to stop the Select Committee from getting to the facts about January 6th and his lawsuit is nothing more than an attempt to delay and obstruct our probe. Precedent and law are on our side.”

The pair vowed to “fight the former President’s attempt to obstruct our investigation while we continue to push ahead successfully with our probe on a number of other fronts.”

For its part, the White House stood by its decision not to assert privilege over documents sought by the committee, alleging in a statement Monday that Trump “abused the office of the presidency and attempted to subvert a peaceful transfer of power.”

“The former president’s actions represented a unique — and existential — threat to our democracy that can’t be swept under the rug. As President Biden determined, the constitutional protections of executive privilege should not be used to shield information that reflects a clear and apparent effort to subvert the Constitution itself,” White House spokesman Mike Gwin said in a statement.

Among several legal arguments he’s making in court, Trump claims the House Committee hasn’t made clear the legislative reasons for why it needs records from Trump’s presidency, and that he should have some ability to keep private his discussions as president.

It also claims that the Presidential Records Act is unconstitutional if it is “read so broadly as to allow an incumbent President unfettered discretion to waive the previous President’s executive privilege, mere months following an administration change.”

The National Archives is slated to turn over the requested documents to Congress by early next month — putting Trump’s court pursuit on a short timeline if he wants to block the release of the information to the House.

In the lawsuit, Trump argues the House committee is on a politically motivated “fishing expedition.”

His lawyers say the House committee has no real legislative purpose — and that the Supreme Court in 2020 said Congress needs to have one when seeking information about the President.

The House select panel “apparently believes it has been given a free pass to request a sweeping set of documents and records,” Trump’s lawyers wrote on Monday.

Several of Trump’s arguments in the lawsuit Monday point to the Supreme Court’s ruling on the House’s 2019 subpoena for Trump’s tax records from Mazars USA. In that case, the Supreme Court sent the House’s subpoena for documents back to the lower court, to make sure separation of powers concerns weren’t hurt and that Congress had valid legislative reasons for getting information about a President.

The circumstances of that case were different than the lawsuit Trump is bringing now. In that case, Congress was seeking Trump’s personal financial materials, while this case is about “documents generated by the presidency,” said Greg Lipper, a criminal and constitutional lawyer in Washington, DC.

“Trump is asking the court not only to make its own determination that the documents are privileged but to override the actual, current holder of the office,” Lipper said.

And even in the Mazars case — as Jeffrey Robbins, a former lawyer to the Senate who is now in private practice, noted to CNN — the Supreme Court “didn’t hold that subpoena was invalid or that Congress couldn’t obtain it.”

“The Supreme Court has repeatedly held that tremendous deference is to be given to Congress in conducting investigations and in determining what is within the scope of its own authority,” Robbins said.

Still, Trump’s lawsuit against the Mazars subpoena stalled the House from getting records until after he left office — and the records still aren’t in the House Oversight Committee’s hands.

The lawsuit against the Archives could similarly drag out the House’s pursuit of White House documents related to January 6 past the next congressional elections, especially if the fight heads into an appeals process that outlasts Democrats’ control of the House.

“Trump has demonstrated an ability to pressure the delay point,” said Paul Rosenzweig, a professorial lecturer in law at The George Washington University Law School and founder of Red Branch Consulting. “He’s always been good at using litigation as a weapon, and this is another one of those.”

In the meantime, Trump has only weeks to convince a court to intervene.

The National Archives told Trump that it would turn over records to Congress that he wants to keep secret on November 12 — unless a court steps in, according to the former President’s lawsuit fighting the release of those documents.

The Archives said it consulted with the Justice Department and the White House, and determined the committee should receive the documents it has requested, even though Trump opposed the release of some records from his presidency, according to a letter from Archivist David Ferriero last week. A copy of that letter is included as an exhibit in Trump’s lawsuit on Monday.

According to the letter, Ferriero notified Trump that the archivist would disclose to the House committee all “responsive” records that President Trump determined were subject to executive privilege on November 12 “absent any intervening court order.”

The Archives’ newly announced timeline places extra urgency on Trump’s lawsuit, and may prompt Trump to ask the courts to get involved quickly to preempt the deadline.