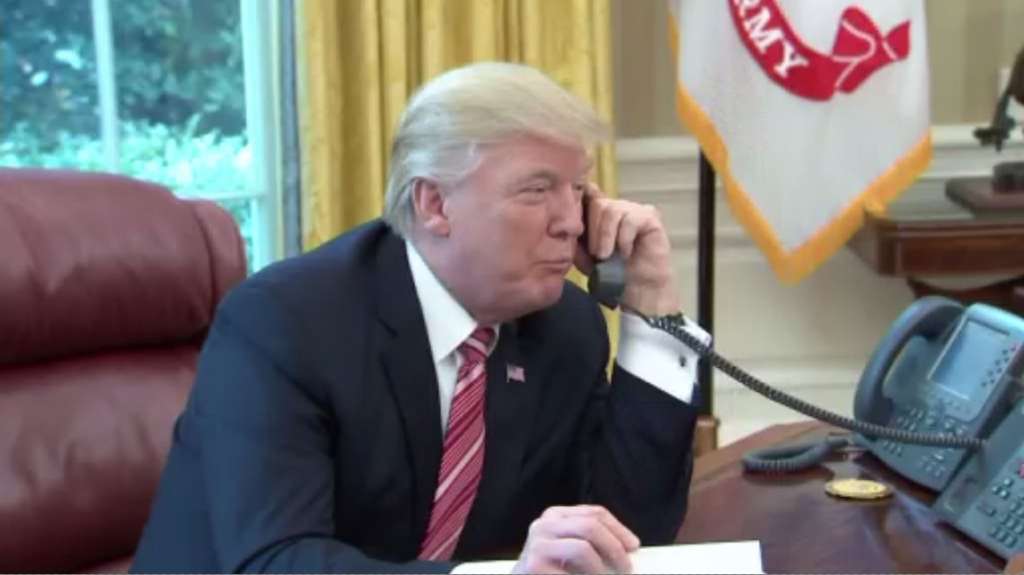 As Democrats and the director of national intelligence worked out key arrangements, Trump’s allies erupted in a surge of second-guessing and conspiracy theorizing across the Sunday talk shows, suggesting the White House strategy is unclear against the stiffest challenge to his presidency. One former adviser urged Trump to confront the crisis at hand and get past his fury over the probe of Russian election interference.

“I honestly believe this president has not gotten his pound of flesh yet from past grievances on the 2016 investigation,” said Tom Bossert, Trump’s former homeland security adviser. “If he continues to focus on that white whale,” Bossert added, “it’s going to bring him down.”

The Ukraine investigation produced what the Russian probe did not: formal House impeachment proceedings based on the president’s own words and actions.

The White House last week released a rough transcript of Trump’s July 25 call with Ukranian President Volodymyr Zelenskiy, as well as the whistleblower’s complaint alleging the U.S. president pressured his counterpart to investigate the family of Joe Biden, the former vice president who is seeking the Democratic nomination to challenge Trump’s reelection next year.

In a series of tweets Sunday night, Trump said he deserved to meet “my accuser” as well as whoever provided the whistleblower with what the president called “largely incorrect” information. He also accused Democrats of “doing great harm to our Country” in an effort to destabilize the nation and the 2020 election.

Trump has sought to implicate Biden and his son Hunter Biden in the kind of corruption that has long plagued Ukraine. Hunter Biden served on the board of a Ukrainian gas company at the same time his father was leading the Obama administration’s diplomatic dealings with Kyiv. There has been no evidence of wrongdoing by either of the Bidens.

The House forged ahead, with Schiff’s committee leading the investigation. Democrats are planning a rapid start to their push for impeachment, with hearings and depositions starting this week. Many Democrats are pushing for a vote on articles of impeachment before the end of the year, mindful of the looming 2020 elections.

Schiff has said the whistleblower has agreed to testify, but the logistics involving security had yet to be set.

On a conference call later Sunday, Pelosi, who was traveling in Texas, urged Democrats to proceed “not with negative attitudes towards him, but a positive attitude towards our responsibility,” according to an aide on the call who requested anonymity to share the private conversation. She also urged the caucus to be “somber” and noted that polling on impeachment has changed “drastically.”

A one-day NPR/PBS NewsHour/Marist poll conducted last Wednesday found that about half of Americans — 49% — approve of the House formally starting an impeachment inquiry into Trump.

There remains a stark partisan divide on the issue, with 88% of Democrats approving and 93% of Republicans disapproving of the inquiry. But the findings suggest some movement in opinions on the issue. Earlier polls conducted throughout Trump’s presidency have consistently found a majority saying he should not be impeached and removed from office.

On the call, Democratic Caucus Chairman Hakeem Jeffries of New York urged the caucus to talk about impeachment by repeating the words “betrayal, abuse of power, national security.” At the same time, Democrats’ campaign arm was mobilizing to support the candidates, according to a person on the call who spoke on condition of anonymity to discuss the details.

In contrast, Republicans offered a televised array of strategies to a president who spent the day at his golf club in Virginia and prefers to handle his own communications.

Stephen Miller, the president’s senior policy adviser, called the whole inquiry a “partisan hit job” orchestrated by “a deep state operative” who is also “a saboteur.”

“The president of the United States is the whistleblower,” Miller said.

“Why would we move forward with impeachment? There’s not something that you have to defend here,” the California Republican said.

“I am deeply frustrated with what he and the legal team is doing and repeating that debunked theory to the president. It sticks in his mind when he hears it over and over again,” said Bossert, who also was an adviser to President George W. Bush. “That conspiracy theory has got to go, they have to stop with that, it cannot continue to be repeated.”

Giuliani not only repeated it but also brandished what he said were affidavits that support them and claimed that Trump “was framed by the Democrats.”

He also at one point said he would not cooperate with Schiff, but then acknowledged he would do what Trump tells him. The White House did not provide an official response on whether the president would allow Giuliani to cooperate.

Two advisers to the Biden campaign sent a letter Sunday urging major news networks to stop booking Giuliani on their shows, accusing Trump’s personal attorney of spreading “false, debunked conspiracy theories” on behalf of the president. The letter added: “By giving him your air time, you are allowing him to introduce increasingly unhinged, unfounded and desperate lies into the national conversation.”

Biden advisers Anita Dunn and Kate Bedingfield sent the letter to the presidents of ABC News, NBC News, CBS News, MSNBC, CNN and Fox News as well as executive producers and anchors of their news shows. The advisers also asked that if Giuliani continues to appear, the networks give equivalent time to a Biden campaign surrogate and admonished the networks for giving Giuliani time in the first place, calling it “a disservice to your audience and a disservice to journalism.”

Giuliani appeared on ABC’s “This Week” and CBS’ “Face the Nation,” while Schiff was interviewed on ABC and NBC’s “Meet the Press.” Bossert spoke on ABC and Miller on “Fox News Sunday.” McCarthy’s remarks were broadcast Sunday on CBS’ “60 Minutes.”